News and notes from Day One of the Jaguars' mandatory, three-day veteran mini-camp 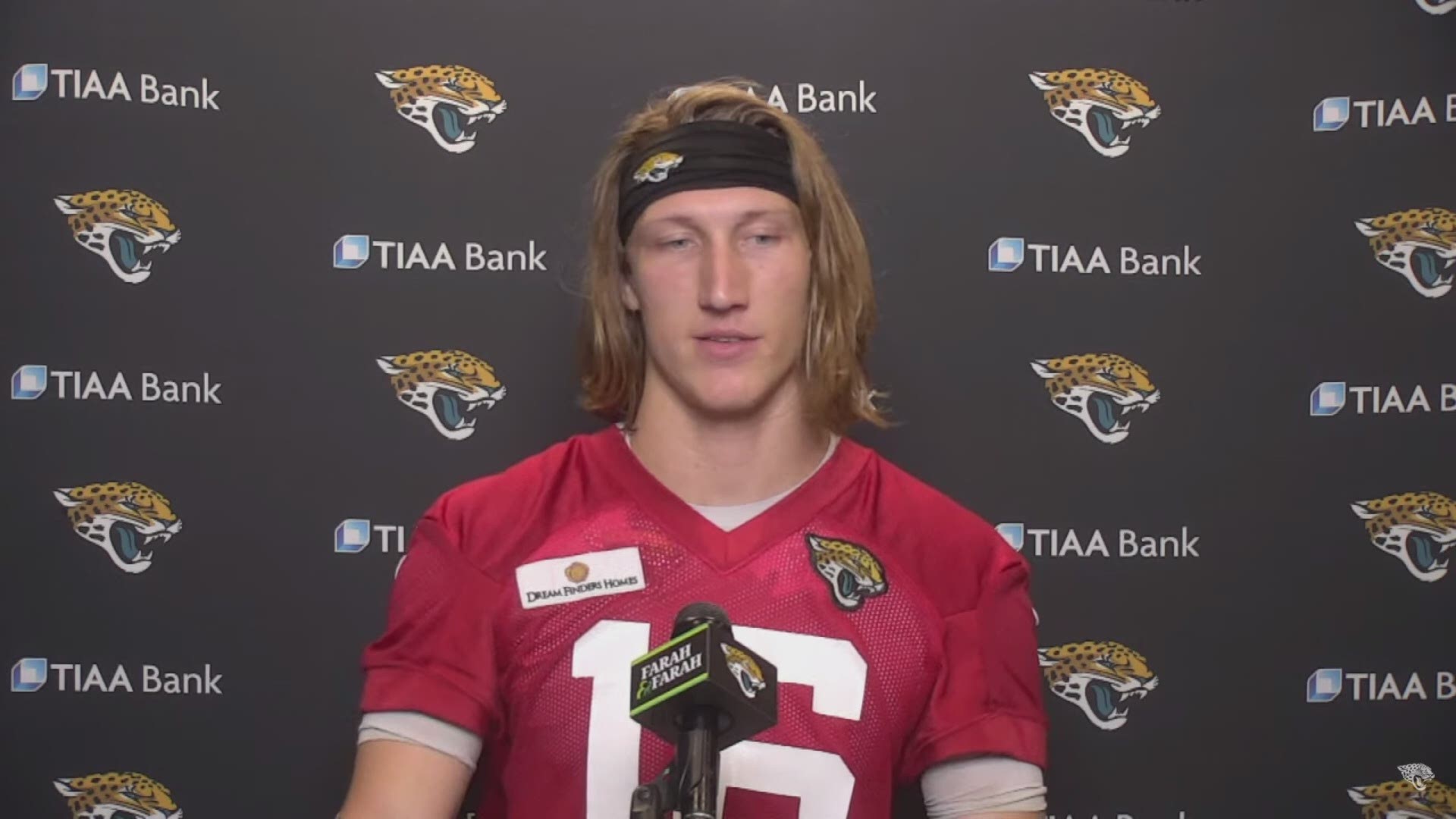 Day One of the Jaguars' three day, Mandatory Veteran Mini-Camp is officially in the books.

The biggest piece of note: for a second straight week, rookie quarterback Trevor Lawrence was limited due to a hamstring injury. Lawrence did throw during seven-on-seven drills, but did not participate during team periods.

"It's been about a week. Just trying to work it back to full capacity," the first-overall pick told reporters after Monday's practice. "It's frustrating to not be able to go full-speed. But I'm just trying to not have anymore setbacks."

Head coach Urban Meyer said that, if it was a game, Lawrence would have been able to play. The team is just taking extra precautions.

"You pull a hamstring at this point, [and] you're going to miss all your summer conditioning. So we're being somewhat conservative on it."

With that said: Lawrence still participated in much of Monday's session that was open to the media. How did he fare?

Let's jump into this Mini-Camp edition of Mia's Quick Hits.

Before we dive into the pass-by-pass breakdown from four sessions of team drills: here is what we had Lawrence charted for during the seven-on-seven portion of practice (as best as this reporter can describe while still following NFL PR guidelines).

- Incomplete to WR Josh Imatorbhebhe. Lawrence put the ball about two steps ahead.

That's a final line of 8-of-11, including six consecutive completions to finish. Lawrence had been standing to the side during the previous team drill... so perhaps he just needed a bit of time to warm-up again.

No completion was more than a dozen yards, so, no dimes or highlight reel plays. The completion to Chark was one that definitely caught the fourth-year receiver by surprise -- but was delivered on the money.

If this line from Shaq Griffin about Lawrence doesn't get you fired up, I don't know what will:

"The rotation of the ball, the timing, the way he’s putting it there, away from everybody -- it’s just insane to see that so early in a quarterback. You’re talking about coming in the league with so much high hopes and he’s proving it."

With Lawrence sidelined during team drills, Minshew received the bulk of the reps.

During the first period, he went 1-of-3: a completion to Jamal Agnew coupled with a diving, missed catch by Cooper and a pass batted down.

During the second period, Minshew went 2-of-4: completions to Chark and Collin Johnson (through traffic), but also a mistimed pass that hit the ground and a D.J. Daniel interception. It would prove to be the only interception of practice.

During the third period, Minshew was 3-of-6. His first pass missed any and all targets and hit the ground. He followed that up with three straight completions, two to Tim Tebow and one to rookie Luke Farrell. Minshew then had another pass batted down and then fell victim to a tremendous pass break-up by Corey Straughter.

That's a final line of 6-of-14 for the third-year quarterback. Not as impressive as he was in the final, open OTAs, but it's still quite clear: Minshew is the second-best quarterback on the field. His knowledge of the playbook at this point, as detailed last week, probably exceeds Lawrence's, too. From what people in the facility have told this reporter -- and Urban Meyer told the media last week -- the Jaguars love Minshew's "competitive spirit."

Beathard saw the second-most snaps to Minshew during team drills. For the third straight week, the results continued to be mixed.

In the first period, CJB (my Iowa friends know how it be) was technically 1-for-2. He would've been sacked on the first play, but, because this is off-season workouts, tucked it and ran. He then underthrew Laquon Treadwell before completing arguably one of his best passes of the day, through traffic to Cooper.

CJB looked more confident in the next team drill period. We had him 4-of-5, but with a pair of hand-off's to Devine Ozigbo. He completed passes to Agnew and Jon'Vea Johnson (the second of which was a spectacular, one-handed grab -- and probably the best catch of any receiver Monday). He also rolled out and hit rookie tight end Luke Farrell. He was a step ahead of Phillip Dorsett on a deep ball that was just out of his reach.

That's a final line of 5-of-6... although I will tell you: even watching back video now (media are allowed to film the first hour-plus of practice prior to the start of team drills), even in one-on-one's, Beathard is still throwing behind receivers at times.

Luton took just one rep during seven-on-seven drills (the only quarterback besides Lawrence to do so) and completed a pass to Jon'Vea Johnson. Lot of Johnson today -- more on that in a second.

Luton took all the reps in the final team period. He was 1-of-4 with a pair of hand-off's, but that line requires an explanation. Luton's first pass to Phillip Dorsett was initially completed, only for Dorsett to not secure the ball. On a broken play, Luton hit rookie Jalen Camp on an absolute beauty, over-the-top throw -- through traffic. He then threw just a step ahead of Collin Johnson for a would-be touchdown. Luton then was on target for Pharoh Cooper, only to have the pass broken up by Brandon Rusnack on a tremendous play.

So, a 2-of-5 day for the second-year quarterback. I still think Luton looks far more composed and certainly more vocal than he did at any point last year.

In Turn: Charting the Receivers

I knew it before I wrote that first section but: second-year tight end Tyler Davis was a frequent target on Day One of Mini-Camp, as was tight end Tim Tebow. Interestingly enough, it was two other tight ends that Urban Meyer singled out when I asked him to assess the position group:

"[James] O’Shaughnessy and [Ben] Ellefson have been—they’re two of the most improved really on the team. When you watch last year’s film compared to this year, what I saw early in phase two, was very much improved," Myer said. "We’re still not where we need to be at that room right now, but we’re getting closer."

I will say this:

I kept having to ask who No. 18 was... because for the first time this spring, Jon'Vea Johnson was everywhere. It shouldn't be a complete surprise: the third-year wide receiver posted some of the fastest times during the Jaguars' off-season speed workouts. He led the way with four catches Monday.

Rookie Travis Etienne continued to do a little of everything for the Jaguars, hauling in a pass during team drills and also taking hand-off's. Meyer raved about him after practice.

"I saw flashes of what I remember seeing in college, here in the last week and a half. The Jaguars, when you look at it statistically, big plays were very hard to find last year. And this guy has big play written all over him. He’s a space player, so ideally, we’re going to be one of those multiple offenses that has spread elements as well as the wide wire, the two tights. I think that’s hard to defend if you can do both."

We knew the Jaguars would carry two kickers on their 90-man roster; they carried one on the practice squad to start the season last year, too. But this is what Urban Meyer had to say about the position:

“The kicker situation, that’s exactly what that was. We have two guys that are very talented kickers, very talented. And we’re going to do that quite often before we have to make a decision.”

Josh Lambo has been with the Big Cats since 2017 and has a cap-number of $4.37M. He was five-for-five on field goals in 2020 before injuries cut his season short to just four games. After a kicker carousel, the Jaguars finally settled on Aldrick Rosas, who finished 8-of-11 last season.

Lambo missed four field goals on Monday -- including two in succession. One of his field goals was saved when it bounced back inside the upright. Rosas missed one, while making a pair of 57-yarders. Full disclosure: I didn't even begin charting the kickers until the.. third period of field goal drills. Needless to say, this was the first time we've seen a "kick-off" during off-season workouts. Did not see this one coming.

- 2020 first rounder K'Lavon Chaisson missed practice after testing positive for COVID-19 this morning. Chaisson will be re-tested. He had just returned from the Von Miller Pass Rusher Summit this weekend.

- The only two players working off to the side today were Leon Jacobs (ACL) and Andre Cisco (ACL). Tyson Campbell and CJ Henderson are not at full-speed, but remained with their position groups. Jacobs did warm-up with his position group, and speaking of...

- I asked Urban Meyer why Jacobs, who has spent the last three years working with the linebackers, has been primarily with the defensive line.

One, I promise, Urban: I do know what an OLB is, I swear! But in providing this answer, Meyer also shed light on what the actual depth chart will look like for the Jaguars come training camp.

- Shaq Griffin is the front-runner for the annual, "Good Guy of the Year Award" presented by the Jaguars media, and it's not even close:

"I'm the guy that invites the guys to the house. Or, 'hey, let's do dinner!' ... I wanna know your why so I can do whatever it takes to help you achieve those goals for you and your family."

This dude just gets it. pic.twitter.com/doTcQI1RT7

Day Two of Jaguars Mandatory Mini-Camp is tomorrow morning. Until then... enjoy this great photo, courtesy of AP Images: