An update on the Jaguars' rookie quarterback and other observations from Jaguars' OTA No. 8 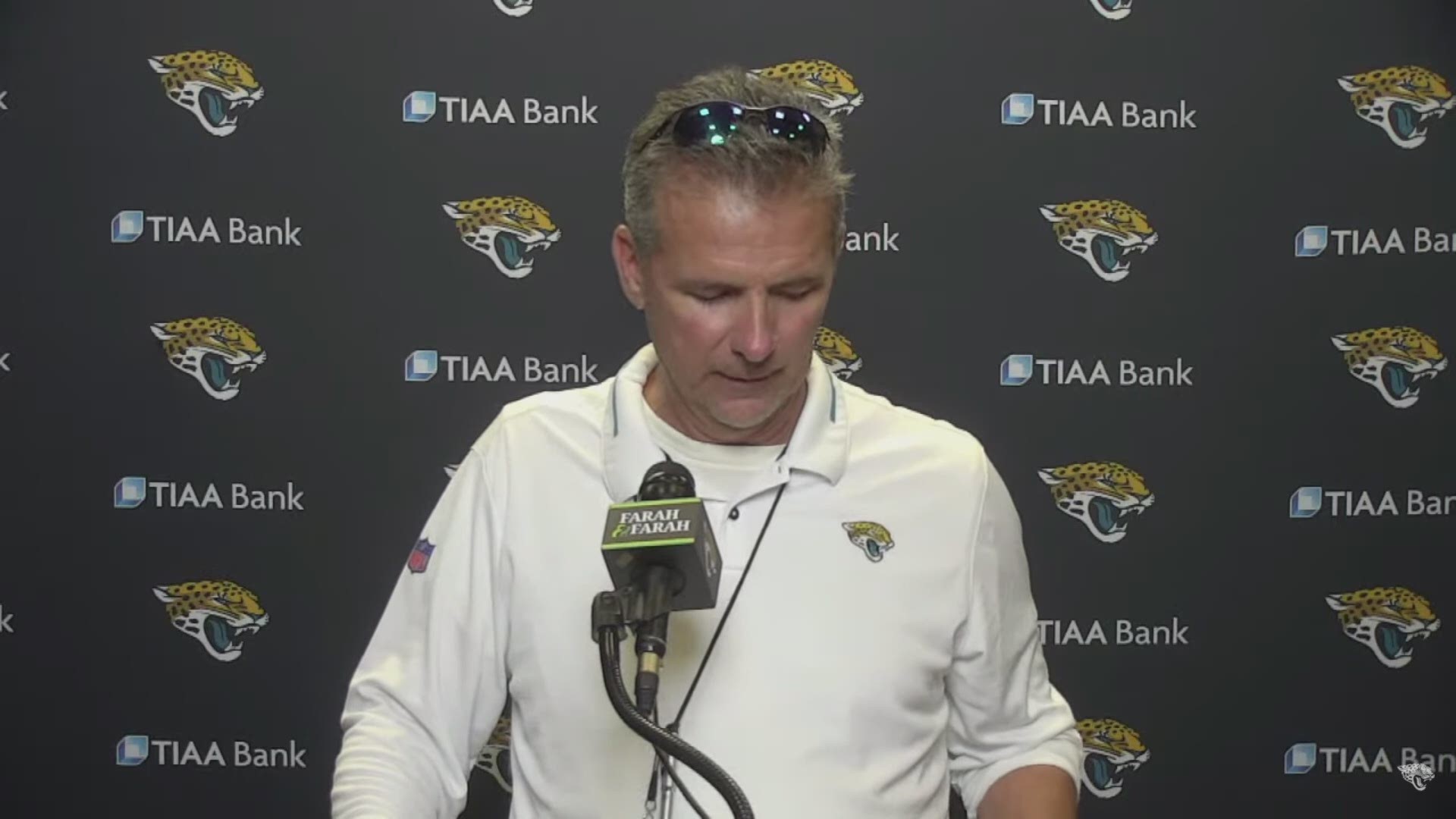 After an off-day tomorrow, Urban Meyer expects Trevor Lawrence to be a full-go at Thursday's final, voluntary on-field work-out. The 2021 first overall pick experienced some hamstring "tightness" mid-way through Tuesday's practice; the Jaguars wanted to play it safe and held him out of the ensuing team drills.

"We didn't want to take any chances. He should be fine," Meyer said after practice. "We have an off-day tomorrow, and he should be good to go Thursday."

But what stood out to this reporter -- and perhaps it's naïve on the rookie Lawrence and a first-year Jaguars coaching staff's part: as soon as he felt the tightness, Lawrence immediately sought treatment. Once he had been standing off to the side for 20-30 minutes, Lawrence sought out an assistant coach to begin throwing with him. He then negotiated with coaches to let him back on the field for the final team drills of the day.

And while Lawrence would throw two pick-six's -- including one on the first rep he took -- it showcased how much of a gamer he is. How much he loves football. And, perhaps, how much he wants to showcase that passion and commitment to his teammates.

Was it the right move health-wise? We'll have to wait and see.

Here's some other things I saw at Jaguars' practice on Tuesday, the final open OTA until next week's mandatory mini-camp.

- With Lawrence sidelined for much of practice, the assembled media got an extensive look at returner Gardner Minshew as well as fifth-year quarterback C.J. Beathard. Second-year quarterback Jake Luton was absent from Tuesday's practice.

Minshew had his moments during team drills, including touchdowns to Laviska Shenault (wobbly, but timed perfectly) and Travis Etienne (underthrown, but a great, comeback catch by the rookie running back). He finished 3-for-9 in the initial, red-zone period, but that included two low-snaps, one of which was ruled a recovered fumble and the other Minshew had to throw away. Minshew improved during middle-of-the-field, team drills; this reporter had him four of seven in the final period, although the PA announcer ruled the final throw of practice to Jalen Camp incomplete (it looked like a beautiful, shoe-string catch in the end-zone by the sixth-round rookie, and his teammates celebrated accordingly). Minshew also had a pass batted and picked off by Lerentee McCray during middle-of-the-field team drills.

Beathard was one of four in red-zone drills, including an interception by Josh Jones. While Beathard threw the ball into no-man's land, it was an incredibly acrobatic, one-handed grab by the veteran Jones.

- As that breakdown of the quarterbacks indicated, the Jaguars' secondary got after it on Tuesday. Through the course of the two-hour practice, the Jaguars' quarterbacks were picked off four times during team drills: Josh Jones (C.J. Beathard), Sidney Jones (Trevor Lawrence), Daniel Thomas (Trevor Lawrence), and Lerentee McCray (Gardner Minshew; it was batted at LOS and returned for would-be touchdown). Cornerback Shaq Griffin also had a pair of pretty pass-break-up's during 7-on-7 drills.

- I asked Joe Schobert who in particular stood out to him on defense. "Rayshawn Jenkins [has come in] and he has some of the quickest, smoothest feet and acceleration. Dewey [Andrew Wingard] keeps coming and making plays on the ball. Josh Jones has had three or four interceptions in the last week or so... [and] we have a lot of guys like C.J. [Henderson] who are coming back and haven't practiced yet. The competition you see there -- first-string, second-string, third-string guys getting interceptions day-in and day-out -- it's just going to create a great environment going through training camp."

- It was interesting to see quarterbacks coach Brian Schottenheimer quizzing his three quarterbacks during early warm-up drills alongside the centers and running backs. Given he led the install and has been with the team the last two years, Gardner Minshew has largely given the situational calls during that simulated drill. On Tuesday, Schottenheimer consistently looked to Lawrence to provide answers for what the team would do on certain passing downs. At times, Lawrence knocked himself on the helmet as he tried to remember exactly what the play-call would be.

- Before he stepped aside to stretch out his hamstring, the first team drill saw Lawrence and Minshew primarily handing the ball off and keeping it for QB draws, something that has not been showcased during the previous, open practices. Both quarterbacks showcased their speed; while Minshew's craftiness is a known commodity in Duval County, Lawrence's speed in open space elicited a few "ooh's" and "ah's" from his teammates and the assembled media.

- After years and years of little to no movement pre-snap in Jacksonville, it was fantastic to see tight ends actually in motion during team drills Tuesday.

- Travis Etienne caught a pass from C.J. Beathard. That wasn't the exciting part (although it was one of Beathard's few completions Tuesday). It was the quick turn and burst from the 25th overall pick that caught my eye. As mentioned, he also hauled in a touchdown pass from Minshew.

- On the defensive side of the ball, even during warm-up's, it was clear that former first-round pick K'Lavon Chaisson will be returning to the up-right, outside linebacker position he played at LSU. He consistently did not have a hand-in-the-dirt during warm-up's, let alone team drills (he hardly did there either). In contrast, fourth-round pick Jordan Smith of UAB -- while definitely a project -- has been practicing in a three-point stance far more frequently. Part of that may be the Jaguars' coaching regiment for Smith, part of it may be the versatility he offers to play either along the line or at outside linebacker.

- Leon Jacobs, primarily the SAM Linebacker during his first three years in Jacksonville, has been working out with the defensive linemen when his rehabilitation from ACL surgery permits.

- Defensive backs Tyson Campbell (hamstring) and C.J. Henderson (labrum) were back on the field with the full, 90-man roster Tuesday, albeit in a limited capacity. Meyer said the two DB's are only cleared for "individual drills," "nothing live" at this time.

- In addition to Luton, left guard Andrew Norwell was once again absent from voluntary work-out's.

The next open practice to the media will be on Monday, June 14, the first day of mandatory mini-camp for the Jaguars. Mini-Camp will take place Monday thru Wednesday; the Jaguars will then break camp for the next six weeks.