Yes, Trevor did throw a pass to Tim Tebow. How did it happen? Observations from the second, open practice of Voluntary Work-Out's 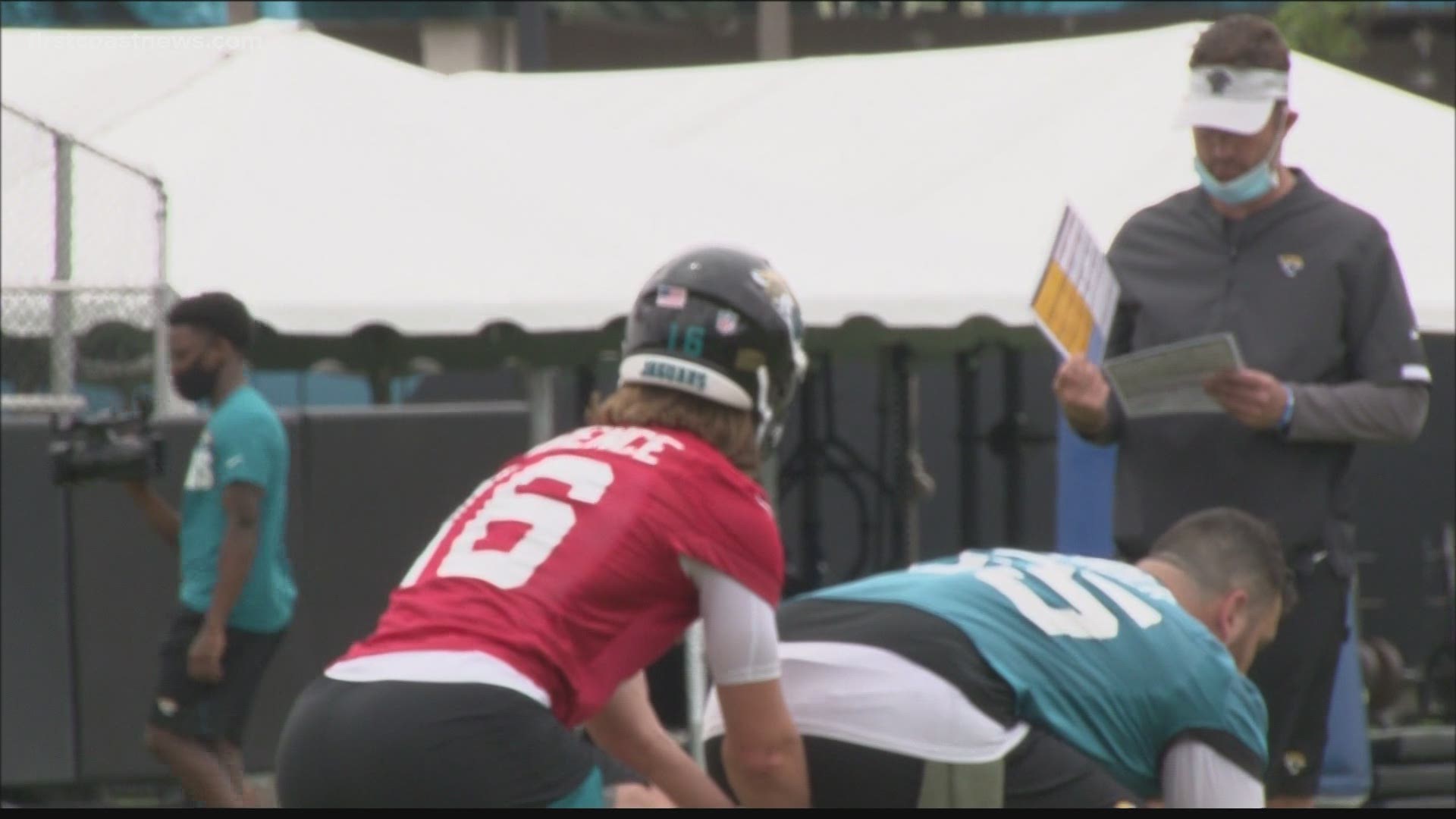 No, the Jaguars' big morning announcement wasn't the only highlight from TIAA Bank Field on Thursday.

Thursday made it abundantly clear: long before the Four Seasons Hotel is built on the banks of the St. Johns River; long before the Jaguars' Football Performance Center is completed, Trevor Lawrence will have established himself as a premier passer in the National Football League.

Let's start there and make our way through Thursday's observations from OTA No. 6, the second that was open to local media.

- As I tweeted during Thursday's practice: I cannot wait for Jaguars fans to see how Trevor Lawrence throws his receivers open. Forget the fact that every throw is a perfect spiral. He's leading his receivers (although, at times -- my fellow reporters and I half-joked -- it appeared he was over-compensating to do so, perhaps to make up for the fact that C.J. Beathard and Jake Luton were underthrowing the same receivers).

All joking aside: Lawrence over-threw two total receivers for the hour and 45 minutes yours truly was watching. During the first set of team drills, he had a bit of happy feet but quickly settled down after the first pseudo drive. I would equate that first set of team drills for Lawrence to going to the driving range with the intent of intentionally focusing on certain aspects of one's game, even if others suffer -- it's just practice. And he showed up once he got on the actual course -- I mean, later in practice. John Shipley at The Jaguar Report was standing next to me at practice and charted Lawrence's day. After his sub-par performance during red-zone drills last week sparked concerns, Lawrence silenced most doubters Thursday.

(This is the part where y’all start trying to interpret ish, so go for it) #Jaguars pic.twitter.com/17fJ8dcF7T

- Yes, Gardner Minshew was indeed absent from voluntary (had to remind y'all of that word) work-out's on Thursday. Urban Meyer dismissed it as one of several absences (starting left guard Andrew Norwell was also absent), saying it was a "light day" for the veterans. Minshew and Norwell are expected back at Monday's practice.

The next practice open to the media is Tuesday.

- Despite my earlier critique of the other two, Jaguars quarterbacks, C.J. Beathard looked much better this Thursday than during last week's practice open to the media. He had a beautiful, deep-ball to wide receiver Tim Jones during early seven-on-seven drills. While he did throw into traffic, his passes were not sailing over receivers' heads like last week. He did, as mention, underthrow a few passes -- although one of those passes made for a nifty, one-handed grab for rookie tight end Luke Farrell, certainly a highlight for the Ohio State product.

I was extremely impressed with Jake Luton last week, but he was a bit up-and-down this Thursday. He was picked off by Daniel Thomas mid-way through practice during team drills (a beautiful, diving catch by Thomas along the sideline). He, too, threw into tight coverage and failed to execute.

- We said earlier this off-season that defensive coordinator Joe Cullen's ties to the Baltimore Ravens organization might lend to similar schemes and practices -- namely, multiple safety sets and tons of blitzing packages. While pads are not flying and defenders cannot touch the quarterback ("obviously I can't touch him or get near him or I'd be on a Greyhound back to Texas," Roy Robertson-Harris joked after practice), Thursday had plenty of visible signs of that Ravens' influence. Safety Rayshawn Jenkins broke to the pocket during early team drills. Of course, since he couldn't tackle Lawrence, he stood there next to him for a solid second before Lawrence got a pass off. Nickel cornerback Tre Herndon also made his way into the backfield on more than one occasion. When Lawrence was forced to leave the pocket, it was also encouraging to see linebacker Joe Schobert getting to the quarterback.

- D.J. Chark and Marvin Jones Jr. both hauled in beautiful deep balls from Lawrence (Chark seemed quite pleased with these developments during his post-practice availability). But, after reviewing my notes, James O'Shaughnessy was the name I jotted down the most. Sure, he bobbled a Lawrence pass in early passing drills (it may have been a hair out of reach to begin with). But he responded nicely with solid availability in the middle of the field and in the flat. Then, of course, O'Shaughnessy saved the best for last, hauling in a deep, centerfield route from Lawrence that drew plenty of hoots and hollers from his teammates.

Fellow tight ends Chris Manhertz and, yes, Tim Tebow caught one pass each during the open portion of practice. The story of Tebow's catch (while still abiding by Jaguars PR rules): during team drills, on arguably the most pressured play Lawrence saw all day, Lawrence rolled right and then, as if a mirage, there was a wide-open Tebow. "The best ability is availability" as Doug Marrone used to say, right?

Urban Meyer calls James Robinson "one of my favorite guys."

"I can't name a harder worker on our team."#Jaguars

- Running backs James Robinson and Travis Etienne were both utilized in the receiving game. Deep breathes, folks. Without a sure-fire, alpha tight end, I believe check-down's to this duo will be the security blanket a rookie quarterback in Lawrence will need during his first season.

- Head Coach Urban Meyer said following practice that the Jaguars would seek to do joint practices with one of their preseason opponents. That means either the Browns, Saints, or Cowboys. Given Meyer's friendship with Saints head coach Sean Payton, this sports reporter believes New Orleans could be the front-runner.

He, Tyson Campbell, and Andre Cisco were once again those that worked off to the side today.#Jaguars