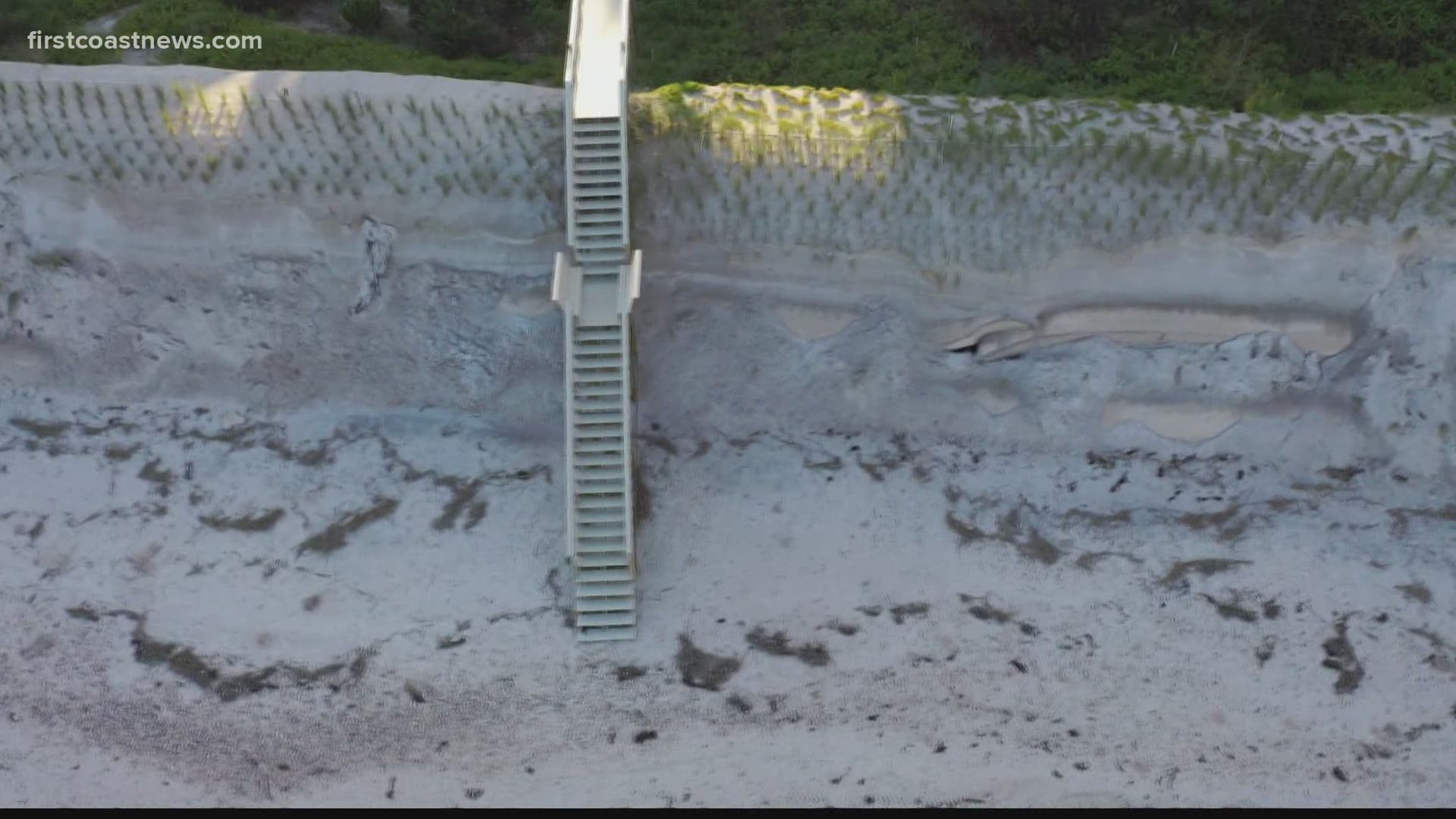 PONTE VEDRA, Fla. — Some call it exposing a weakness, others say it’s a sign of strength.

When a nor’easter hit the First Coast in late September, it exposed some of the so-called “Geotubes” that had been installed on the beach-facing side of 13 homes in Ponte Vedra north of Mickler’s Landing less than a year ago. Even before they were installed, the dune reinforcements – which resemble enormous cookie dough rolls – were the subject of controversy.

“I would just really consider this an absolute epic fail,” Nicole Crosby, who lives about a mile away, said to First Coast News on Monday, pointing at several of the exposed tubes.

Indeed, a large amount of sand had washed away. The Geotubes are stacked like stairs three high in some stretches, and some of the eroded areas resembled cliffs 10 feet or taller.

“What would have happened if it was a hurricane,” Crosby vented. Co-founder of “Never Endanger Sea Turtles,”  a conservation group, Crosby said her concern began before the installation.

“There’s quite a bit of evidence and scientific research that the Geotubes can impact the ability of the sea turtles to nest,” she claimed. Specifically, she said the tubes have already caused so-called “false crawls.”

“Which is when a turtle crawls out of the ocean, she starts to find a place to nest, she rejects it for whatever reason, and then she crawls back into the ocean," she said. “The data show that there were twice as many false crawls at the base of these artificial dunes compared to the rest of the natural dunes.”

First Coast News spoke with two homeowners whose properties are among those with Geotubes between them and the beach. Both declined to be interviewed but said they had seen plenty of successful sea turtle hatchings during the 2020 nesting season, which runs from March through October.

One also specifically said the tubes “did exactly what they were supposed to do,” and both suggested that there would have been more erosion and loss if not for them.

That didn’t dissuade Crosby, who insisted that even a casual comparison with unreinforced properties proves her right.

In separate conversations, both Crosby and one of the homeowners agreed that sea walls would have caused more erosion and possibly been a disastrous choice. They also agreed that beach renourishment along this stretch of the First Coast is long overdue.

“Mickler is the most used beach in St. Johns County,” Crosby said. “So let’s not forget all these people that we see walking by. It’s for the people that we need to renourish the beaches more than anybody.”

She then added her own speculation.

“If we had had the kind of beach renourishment that almost all of the other beaches in the entire state of Florida have had, these Geotubes would never have gone in.”

The property owners are required to replenish eroded sand, at their own cost, to at least three feet higher than the tops of the Geotubes. One homeowner told First Coast News he and his neighbors are already in the process of getting that done.

A call requesting comment from the Florida Department of Environmental Protection was not returned Monday.