The Terzinis went all out for the 500 Spectacle of Homes this year. This year, they wanted to do something different, so they recreated Hélio Castroneves’ 2009 win. 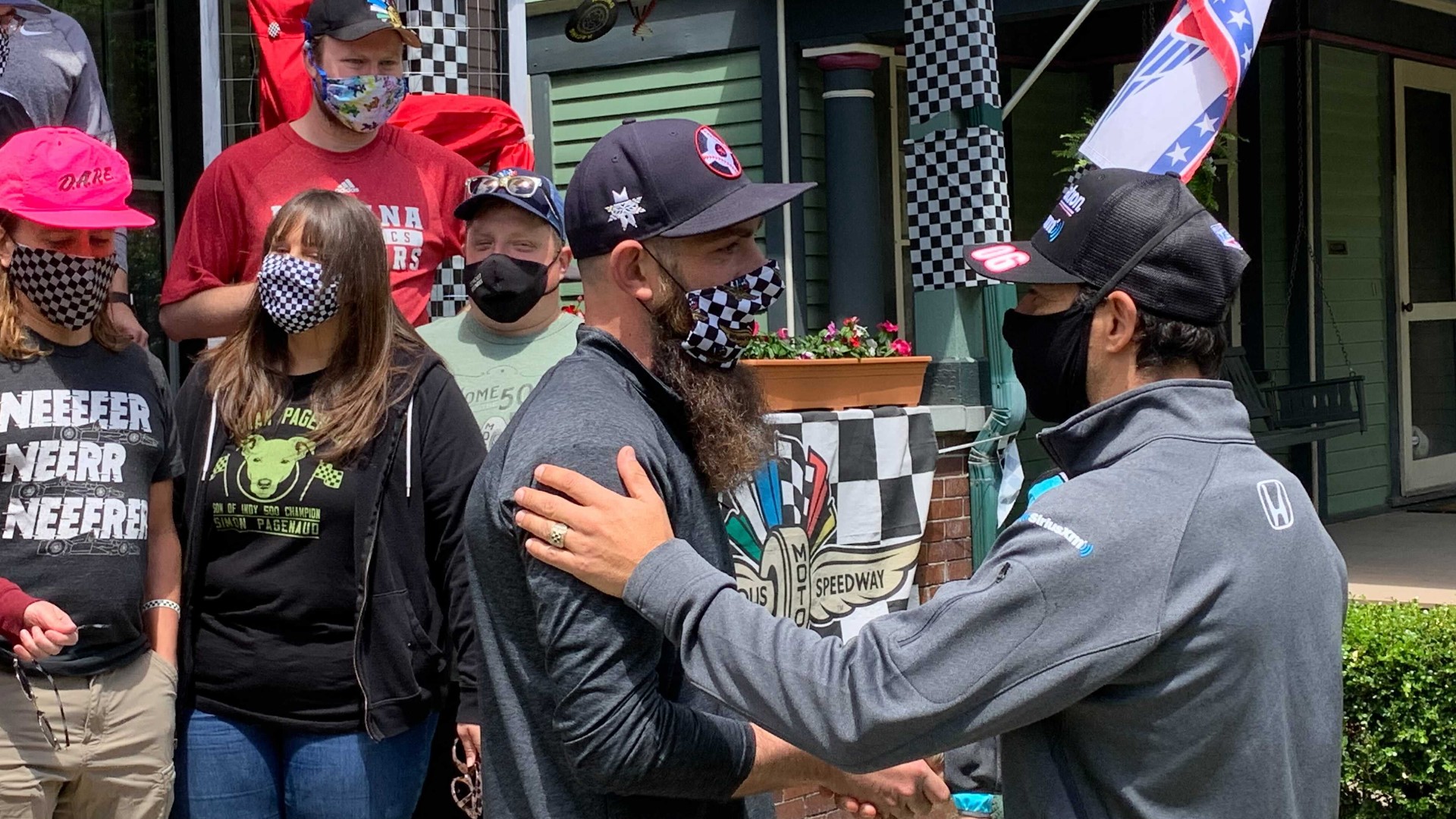 INDIANAPOLIS — Six Indianapolis residents participating in the 500 Spectacle of Homes were selected for a once-in-a-lifetime opportunity. Kimmy and Jameson Terzini were among the six who spent the afternoon welcoming an Indianapolis 500 race car driver to their home.

That house on New Jersey

Driving up New Jersey Street, checkered flags can be seen on several houses just 24 hours before the Indy 500. But one house in particular stands out.

There’s a life-size figure of Hélio Castroneves climbing a fence on the front porch of the Terzini household.

Walking up to their house, it’s easy to feel the excitement and anticipation as the Terzinis and their friends anxiously wait for their favorite race car driver to visit their home.

“Hélio is one of our favorite drivers,” said Jameson Terzini as his wife, Kimmy, nodded her head.

“The speedway has a lot of history in it, and I was fortunate enough to see all three victories,” he added.

Credit: WTHR
Kimmy and Jameson Terzini have a life-size figure of Hélio Castroneves climbing a fence on their front porch.

The Terzinis went all out for the Spectacle of Homes this year. Kimmy said that in past years, they had put out checkered flags, but this year, they wanted to do something different, so they recreated Castroneves’ 2009 win.

“It’s easy to decorate with checkered flags, and it’s a ton of fun, and we do that every year. This is the first year that we have made Hélio climbing up the fence, which Jameson got to see live. And we were trying to think of something fun, and we wanted to incorporate one of our favorite drivers. (So) we started this arts and crafts project,” said Kimmy.

Just stand in the Terzinis' front yard for a few minutes and you’ll see that their house has become a neighborhood favorite. People stopped by to take photos. A FedEx delivery man yelled from the street while making a delivery that he loves Hélio and that he thought the life-size figurine was cool. A neighbor came by to share a 2020 fanny pack that had the Indy 500 logo on it.

The Terzinis said after the year of isolation the world has been through due to the pandemic, their decorations have allowed them to connect with people again.

“It’s been a great community engagement project. Everybody’s been coming by and encouraging us, giving us ideas, and dropping props up and sharing positive affirmations. It’s been a great way to bring our community together” said Jameson.

“There were a lot of people in the neighborhood that were participating as well,” said Kimmy, “so it was a lot of fun."

Jameson has five very close grade school friends, and for all six of them, the Indy 500 has become a tradition.

“I used to go with my dad. Now it’s something I do with my friends and one day, I hope to share with my own family,” said Matthew Ross.

The friends come together every year, no matter where they are. Both Michael Lucas and John Sauter drove down from Chicago for the weekend.

“I flew from Korea to the Indianapolis airport and went straight to the track one year,” said Sauter.

“No one is allowed to get married or have kids anywhere near May,” added Vince Eagan.

“I’m (also) excited for him. And his five best friends are here, and they have the same exact tickets every year and watch the race every year. So, I just think it’s so exciting,” she said.

This year marks Jameson’s 20th year going to the Indy 500. Twelve of those years, he and his friends have sat in the same seats together.

“We’ve been sitting, and it’s the same people every year,” said Eagan, referring to the seats around him and his friends at the Indy 500.

“The people around us have been there 50, 60 years. The guy behind us, Tommy Eaton, he’s been coming for years...He’s 85 years old,” added Eagen. “It’s awesome to get to know the people around us because it’s the same people coming year after year."

“Even our yellow shirt,” said Eagen in agreement as everyone chuckled.

“You see everyone’s kids grow up a little more every year,” added Sauter. But it’s not every day that family and friends get to meet a three-time Indy 500 champion on the front porch of their house.

“Ahhh,” yelled Kimmy as an Indy 500 pace car parked in front of their house.

Applause erupted from the Terzinis' yard and from neighbors who had gathered across the street.

“I can’t believe it! What’s Hélio doing over there?” said Castroneves noticing the life-size replica of his fence climb immediately as he stepped out of the car.

“I Googled images of your helmet and tried to mirror it with your 2009 win,” Jameson said to Castroneves after he and his wife exchanged handshakes with the three-time champion.

He then jumped up the steps of the front porch to pose in front of the figurine.

“You climbing the fence, Dan Wheldon, memorable, I can’t say enough about it. It will never be forgotten,” Jameson said to Castroneves as the driver placed his hand on Jameson’s shoulder in appreciation.

Credit: WTHR
Hélio Castroneves said if he wins the Indy 500 on Sunday, he will be celebrating his victory with the Terzinis and their friends.

“You don’t know how this makes me feel,” replied Castroneves. “The energy that I suck from you guys...and I hope that’s OK,” he added as the crowd erupted with encouragement.

“It fuels me to just rip it apart,” said Castroneves motioning his hands.

Castroneves took photos with each and every one of the Terzinis' close friends who came, as well as signing autographs and shaking hands. One friend of the Terzinis brought a Nintendo 64 IndyCar video game card for Castroneves to sign. The race car driver asked if he still played with the game cartridge. When the fan said yes, Castroneves answered, “now I feel old.”

Castroneves made sure to make every fan feel seen, appreciated and heard before he left.

“Can you peel out in our driveway?” yelled the Terzinis' friends and family.

“My reaction seeing the house was 'No! Who is there?' I’ve never seen anything like this, and it means a lot to me because I do this for the fans. It gives them more energy to push it to the limit to make them as happy as I am right now,” Castroneves told 13News.

Before leaving, Castroneves made sure to post on social media in front of the Terzino’s house, letting fans know where he’ll be Sunday night.

“When we finish the race, when we win the race, we’re going to celebrate with all these guys here,” he said as everyone cheered.