What are the Georgia amendments and referendums on the 2020 ballot?

These are the proposed statewide ballot measures that will appear before Georgia voters during the 2020 general election. 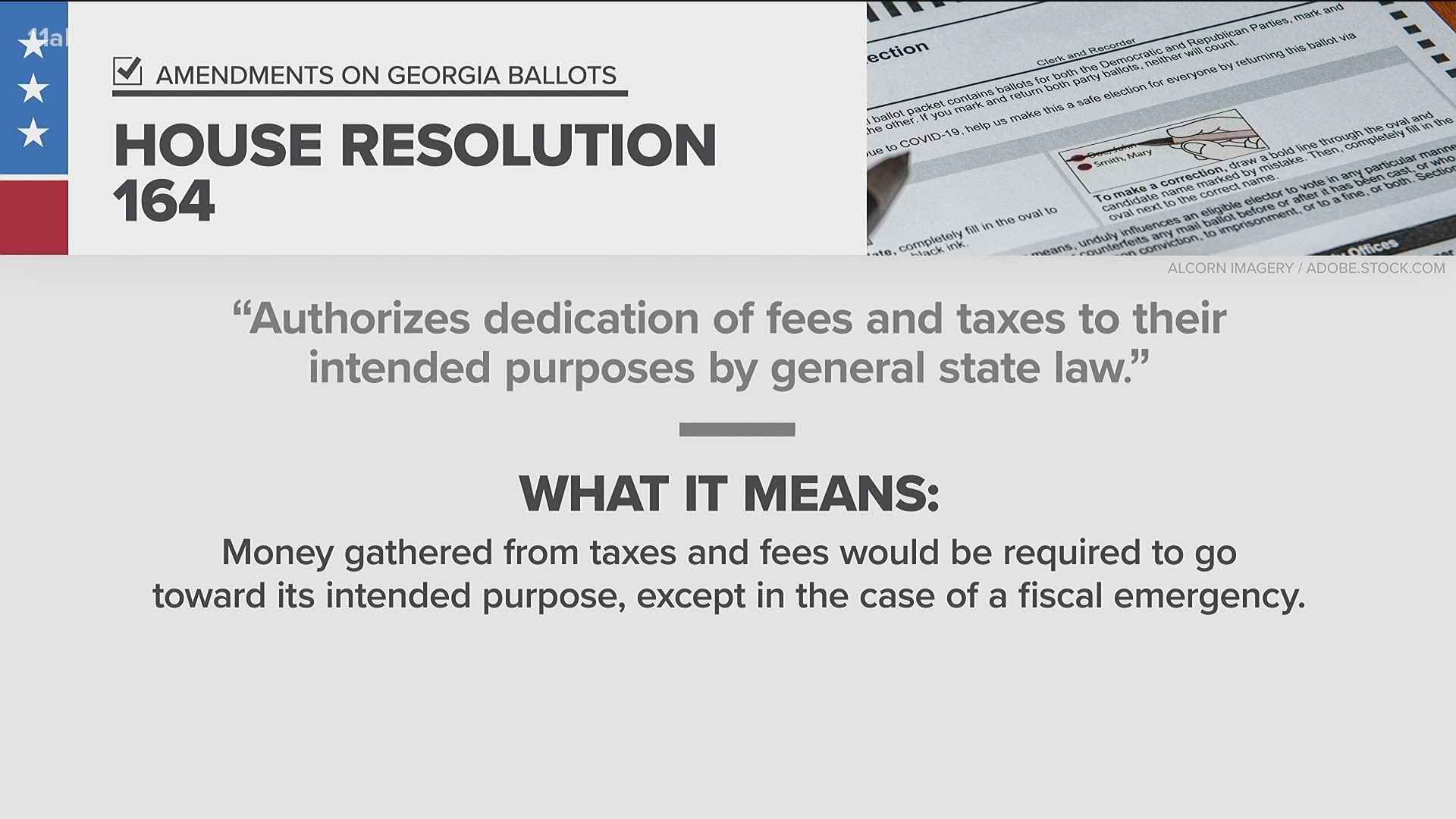 ATLANTA — Along with the candidates for federal, state, and local offices, voters will have a variety of ballot initiatives and referendums to consider as they view their ballots for the 2020 November general election.

Some municipalities will have various school board or Special Local Option Sales Tax (SPLOST) measures on their ballots, while others may have particular measures regarding parks and recreation measures.

However, there are three measures that all Georgia voters will see on their ballots across the entire state.

Two of them are amendments to the Georgia state Constitution, a third is a statewide referendum.

Each of the measures listed will have to be answered by a Yes or No vote on the ballot.

RELATED: How do I know if my absentee ballot has been accepted in Georgia?

"Shall the Constitution of Georgia be amended so as to authorize the General Assembly to dedicate revenues derived from fees or taxes to the public purpose for which such fees or taxes were intended?"

According to the measure as passed by the General Assembly, if passed by voters, the state's constitution would be changed to limit funds that are dedicated to statute-specific projects. In addition, the agency responsible for those funds would have to provide an annual report on the funds involved.

The tax or fee which generates those funds would have to expire within ten years of their creation.

Once the legislation is passed and enacted, the legislature would not be permitted to re-allocate revenues from those funds to the state's general fund unless the governor suspends the fund. The governor would be able to suspend the fund in the event of a financial emergency.

A financial emergency, in this instance, is defined as when total state revenue in the most recent fiscal year is 3% or more below revenue estimates or when the state has three consecutive months of declining revenues.

The governor is only permitted to do this three times within ten consecutive fiscal years.

The Georgia House of Representatives voted on the measure on March 3, 2020. It passed by a vote of 164 to 4. Three members were present and did not vote, while nine others were excused. The four House members who voted against the measure were Rep. Matt Gurtler (R - 8th, Tiger); Colton Moore (R - 1st, Trenton); Renitta Shannon (D - 84th, Decatur) and Phillip Singleton (R - 71st, Sharpsburg).

The Georgia Senate voted on the measure on March 9, 2020, where it passed by a 53-0 margin. Two senators did not vote and one other senator was excused.

Sovereign immunity, by definition, is the concept of the government not being able to be sued without its consent. Its origin lies in British common legal doctrine, based on the concept that "the King could do no wrong."

Under Georgia Amendment 2, if passed, a court could not award damages, attorney's fees, or other court costs, unless authorized by the state legislature.

If approved, the waiver of sovereign immunity would apply to acts occurring on or after January 1, 2021.

The Georgia Senate voted on this on June 15, 2020. It passed by a vote of 50-0, with three senators not voting and three others excused.

The House voted the following day, June 16. The measure passed there, 164-0, with five members not voting and 11 excused.

"Shall the Act be approved which provides an exemption from ad valorem taxes for all real property owned by a purely public charity, if such charity is exempt from taxation under Section 501(c)(3) of the federal Internal Revenue Code and such real property is held exclusively for the purpose of building or repairing single-family homes to be financed by such charity to individuals using loans that shall not bear interest?"

This referendum will provide an exemption from property taxes for property owned by a public charity that is already exempt from federal taxes under Section 501(c)(3) -- such as Habitat for Humanity -- if the property in question is owned specifically for the purpose of building or rehabilitating single-family homes.

In addition, the charity would have to provide interest-free financing to the person or persons purchasing the home.

House Bill 344 came out of the 2019 season of the General Assembly. The House voted on March 4, 2019, where it passed by a vote of 164-1. Six members not voting and nine members were excused. The one member who voted against the measure was Rep. Matt Gurtler (R - 9th, Tiger).