Thousands from around the world have responded to Kerry Bloch's tweet, including the Jacksonville Jaguars. 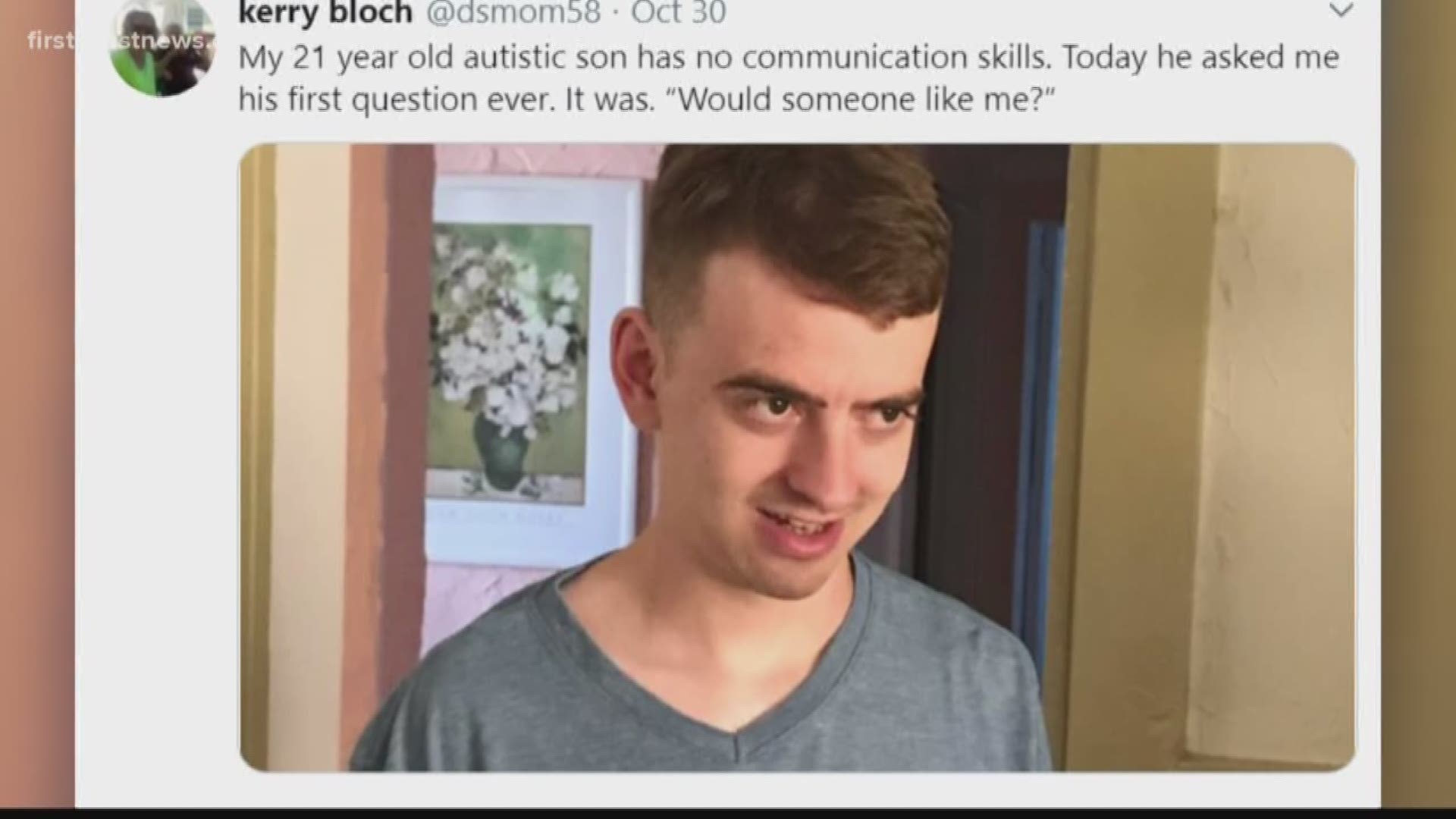 Social media isn’t always used for good, but one family in Neptune Beach said a tweet changed their lives for the better.

David Bloch’s immune deficiency doesn’t let him out of his home much, so it would make sense that he feels lonely. According to David Bloch’s mom Kerry Bloch, David Bloch is severely autistic and has a hard time communicating.

“David's doctors have said he’s a non-responder," she said. "We’ve tried everything. We’ve never had a conversation."

She said she was shocked when David Bloch asked her a question for the first time a few days ago.

”He looks at me kind of intently and I could tell he was trying to formulate something and then he just goes, ‘Would somebody like me?’ and I just started to cry," she said. "I wasn’t really sure how to answer.”

Bloch turned to Twitter. She said she normally uses it as a support group to talk to other parents of kids with autism. She wrote, “My 21-year-old autistic son has no communication skills. Today he asked me his first question ever. It was, 'Would someone like me?'”

“I posted it and didn’t think anything of it,” Kerry Bloch said.

“My phone kept going ping, ping, ping," she said. "I had to ask my husband what do all of these notifications mean.”

Thousands from around the world replied and are still replying.

“Tell David he has a friend in London,” one response reads.

“My family and I live in Amsterdam and even though we are far away, I have a very good feeling, David, that we would all like you a lot, especially our cat,” reads another.

As of Monday, the tweet had more than 73,000 favorites, more than 5,000 retweets and more than 9,000 comments, and that doesn’t include the direct messages Kerry Bloch has received.

“That song message in a bottle … you just throw that bottle out and you just don’t know what’s going on and then all of a sudden there’s 100,000 bottles,” Robert Bloch, David Bloch’s dad, said.

One of those messages came from players on the Jacksonville Jaguars. They sent him a video from London. Other Twitter users sent messages, some offering to send him cards.

“We’re going to respond to each and every one of you individually even if it takes months because David says no one left out and he loves everybody,” Kerry Bloch said. “He has never had a friend and this is what we hoped for. Now, he has a lot of friends and it’s just incredible."

David Bloch’s parents said they hope their message, one tweet, will inspire others. Kerry Bloch said several parents who have kids with autism already reached out to her through social media following the tweet.

"I just wanted parents to know to never give up on your child, to know that anything is possible," she said. "I want people to know if you know someone with a child who is severely autistic, go visit go offer to give them some help. Let them know they're not alone."