Rep. Eskamani said the problem isn't the race on your unemployment application, but what industries were crashed by the pandemic and who made up that workforce. 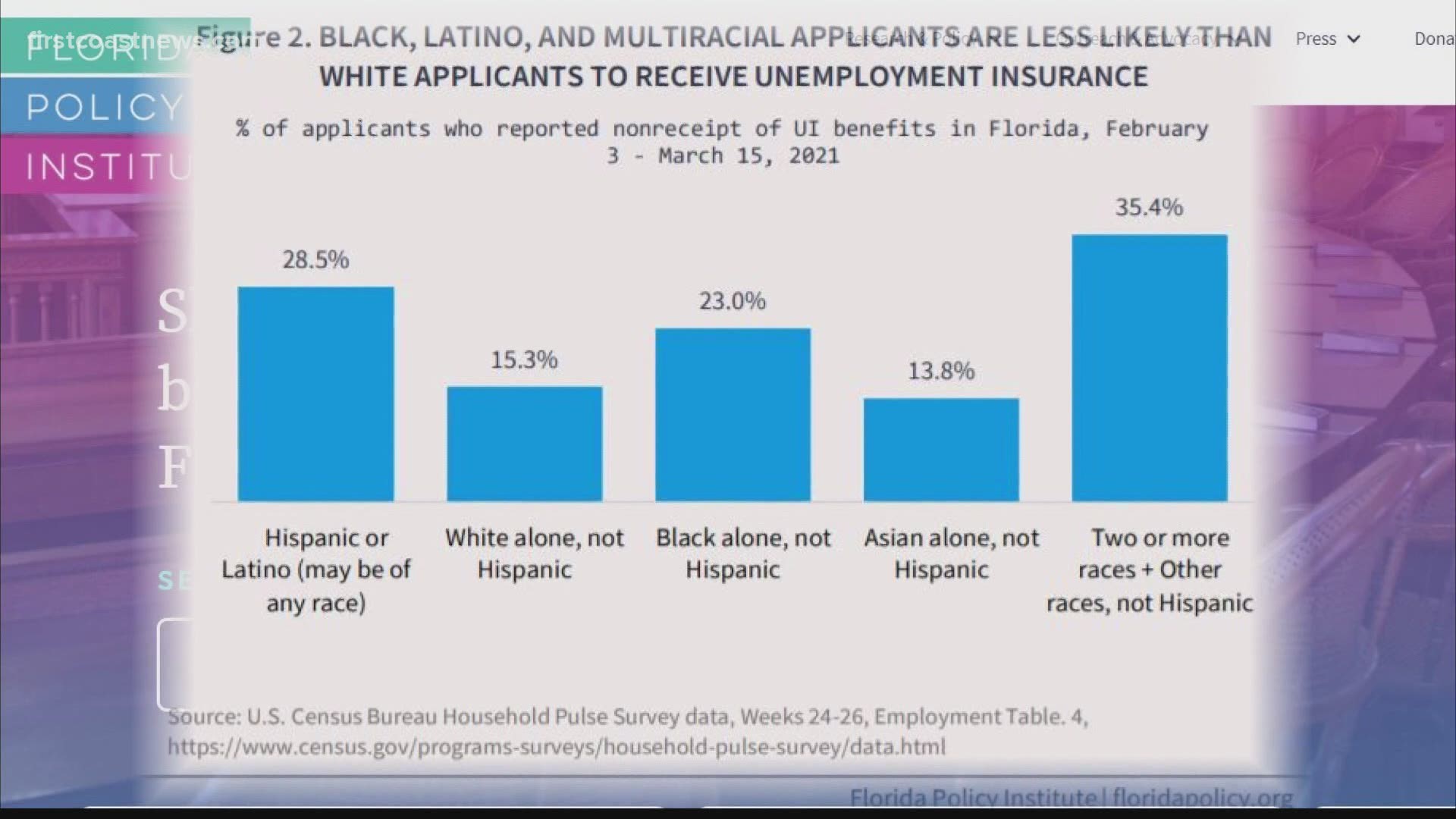 JACKSONVILLE, Fla. — A new report states people of color and those with poor health are being denied for unemployment benefits more often.

“The Florida Department of Economic Opportunity (DEO) is not providing enough information about the resolution of Floridians’ claims for Unemployment Insurance (UI or unemployment assistance) during COVID-19. The limited data that DEO has made available raise serious questions about inequities and contain gaping holes about who is getting denied and the reason for denials.”

The report shows minorities were less likely to receive benefits. About 28% of Hispanic or Latino, 23% of black workers and 35% of multi-racial workers were denied benefits, as compared to the 15% of white workers denied benefits.

The study got this data from the US Census Bureau.

State Represenative Anna Eskamani said the problem may not necessarily lie in what race box you clicked on your unemployment application. It may be about what industries were crashed by the pandemic and who makes up the workforce in that industry.

“The brunt of the pandemic has been on the backs of working-class people,” Eskamani said.

Eskamani referenced the plummeting tourism industry in her district.

The Department of Economic Opportunity shows “Accommodation And Food Services” account for about 14% of initial unemployment claims filed in Florida.

The report states 19% of initial unemployment claims came from the leisure and hospitality industry as a whole.

“So much of the service economy is driven by folks that work at restaurants, hotels, and this can predominantly be folks of black and brown communities,” Eskamani said.

The Accommodation and Food Services industry is often disproportionally done by black or Latino workers compared to their percentage in the total workforce.

“It’s not that DEO goes, ‘Which claimants are Black and which claimants are white?’ This is about a larger systematic structure where there is much more of a likeliness that black and brown folks are going to work in a service economy,” Eskamani said.

The report also states workers with poor health are less likely to receive assistance than workers with better help.

“Almost half of UI applicants in Florida whose health is poor said that they did not receive unemployment assistance, a much higher rate than that reported by applicants in better health,” Huddleston wrote. “Yet poor health does not in and of itself make a claimant for UI ineligible in every instance.”

The report states a low approval rate for people with poor health is not a surprise since, by law, Floridians who are too sick to work are not eligible for state benefits because they are not considered “willing and able to work.”

Workers under 40 also reported a higher rate of denied benefits than older workers. Over 23% of workers under 40 state they did not receive unemployment assistance, compared to the 21% of people over 40 years old.

“Although nonreceipt by younger workers is only two percentage points higher than for workers 40 years of age and older, the impact of COVID-19 based on age is heightened by the numbers of young workers in the service industry,” Huddleston wrote. “Which is among the industries taking the worst hit during the pandemic.”

Huddleston concludes stating unemployment insurance will continue to be the most important safety net to help unemployed Floridians and transparency is key when it comes to its data.

“Detailed data to inform state officials and the public about apparent inequities in Florida’s UI program is critical to addressing unmet needs,” Huddleston wrote. “With a better and more transparent assessment, not only will the public understand the strengths and weaknesses of the system, but officials will be better able to adopt policies responsive to the needs of those who lose jobs during the pandemic.”