Confederate monument's fate to be decided in St. Augustine

The city commission welcomes input as it plans to decide the future of a downtown monument at an upcoming meeting. 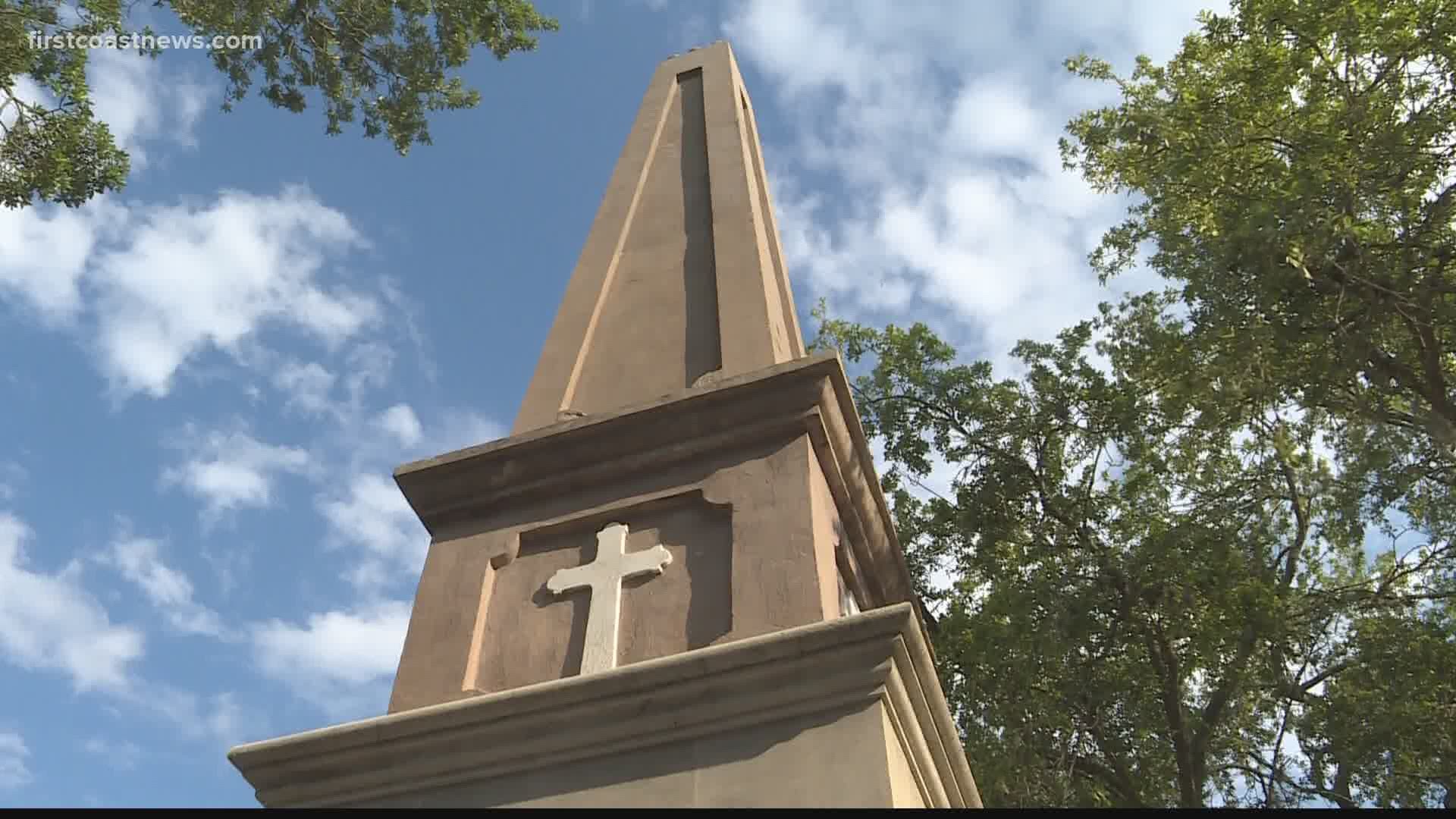 ST. AUGUSTINE, Fla. — Pastor Ron Rawls says he’s glad that the St. Augustine city commission will be discussing – and possibly deciding next Monday – the possible removal of a monument honoring Confederate soldiers, one that’s been standing on the Plaza de la Constitucion downtown since the 1870s.

“I think that a long time ago was the time,” Rawls told First Coast News Wednesday afternoon, three days after leading a loud but peaceful rally on the plaza.

St. Augustine mayor Tracy Upchurch said the obelisk, bearing the names of more than 40 soldiers from the St. Augustine area, would not be dismantled but relocated if the commission votes to remove it from the plaza.

“It is a memorial to those that have died,” the mayor said. “Perhaps there is a cemetery that would be an appropriate location.”

Upchurch clarified that the marketplace where slaves were once bought and sold, as well as the nearby grave of Confederate General William Wing Loring on the University of Florida property, will not be discussed. He said the soldiers' monument could be placed in storage until a future location is chosen if the decision is made to remove it.

But it’s not a done deal. Jill Pacetti of St. Augustine told First Coast News that one of the soldiers whose names are etched on the memorial, Eusebio Pacetti, was her first cousin four times removed. She wants the structure to stay where it is.

“I wouldn’t want anyone to be offended, I love all people,” she began, tempered with “I believe that the men that died from our community deserve to be here just as much as the other war memorial that stands in the other direction.”

“This to us is a memorial," she said. "These men left home, they didn’t return, they weren’t given a proper burial.”

But there was plenty of evidence at Sunday’s rally that many believe the greater good would be served if Confederate monuments come down.

“The idea that black people would have to pay taxes to support something like [a monument], that’s – really it’s become a lie,” Rawls said. “It’s revised history.”

Reverend Rawls, who is also demanding that St. Augustine Police wear body cameras and that the city take formal steps to ensure proportionate minority representation among its staff, said recent incidents in which African-American men have been killed by police should be a tipping point.

“The outrage that swept across the country and then the globe, it got people to listen,” Rawls said.

He said that many African-Americans might not talk much publicly about how Confederate emblems make them feel, but they do talk about it amongst themselves.

“The idea of the Confederacy, whether it’s someone flying a flag, a T-shirt, a hat, a monument – we don’t get warm fuzzy feelings about that,” he said.

To illustrate, he made the comparison, “I think many of us can imagine what the Jews felt like, dealing with Nazism and the symbols they used – the swastikas and everything.”

Pacetti said she sees the monument in a light that empathizes with Rawls’ sentiment but stops short of agreeing with its removal.

“It teaches us a very valuable lesson, something we don’t want to ever do again,” she said, reminding that many of the honored soldiers were draftees and that Confederate soldiers were granted official United States veteran status after the Civil War ended.

“This to us is a memorial," she said. "These men left home, they didn’t return, they weren’t given a proper burial … We don’t know what was in their heart when they went to war, but their lives did matter.”

Rawls, speaking in a much softer tone than during his rally speeches just three days prior, countered, “You can remember that in a graveyard or cemetery. [The monuments are] there to send a message of governmental support of white supremacy.”

Upchurch acknowledged the gravity of the decision, “It’s a great question and it weighs very heavily on all of us,” then offered insight about which priority will win.

“In my mind, those shared values of inclusiveness are going to outweigh the historical concern,” Upchurch said.

But for those who still favor that historical concern, Pacetti said, “The thousands of people who want to still see this historical memorial, I would like to see it placed somewhere where they can still see it.”

The city commission’s discussion and potential vote will happen during its meeting at 10 a.m.. on Monday, June 22. The meeting will be held in virtual format and will be visible here. The link to the agenda is here.

Reverend Rawls said he invites others to join him outside city hall at 75 King St. at 9:45 a.m. He asked that people bring their phones and wear personal protective equipment such as gloves and face masks.

Mayor Upchurch said participants will be allowed to make public comments by phone. The number is 904-293-4330. People can also submit their opinions via email to cityclerk@citystaug.com, with a limit of 400 words. The mayor urged that people send their emails before Monday morning because he anticipated a large number of entries.

RELATED: 'There will be an eye for an eye:' Protesters in St. Augustine demand that city improve policy, remove monuments