The Duval County School district was recently notified that it is under investigation for its mandate, which took effect Tuesday. 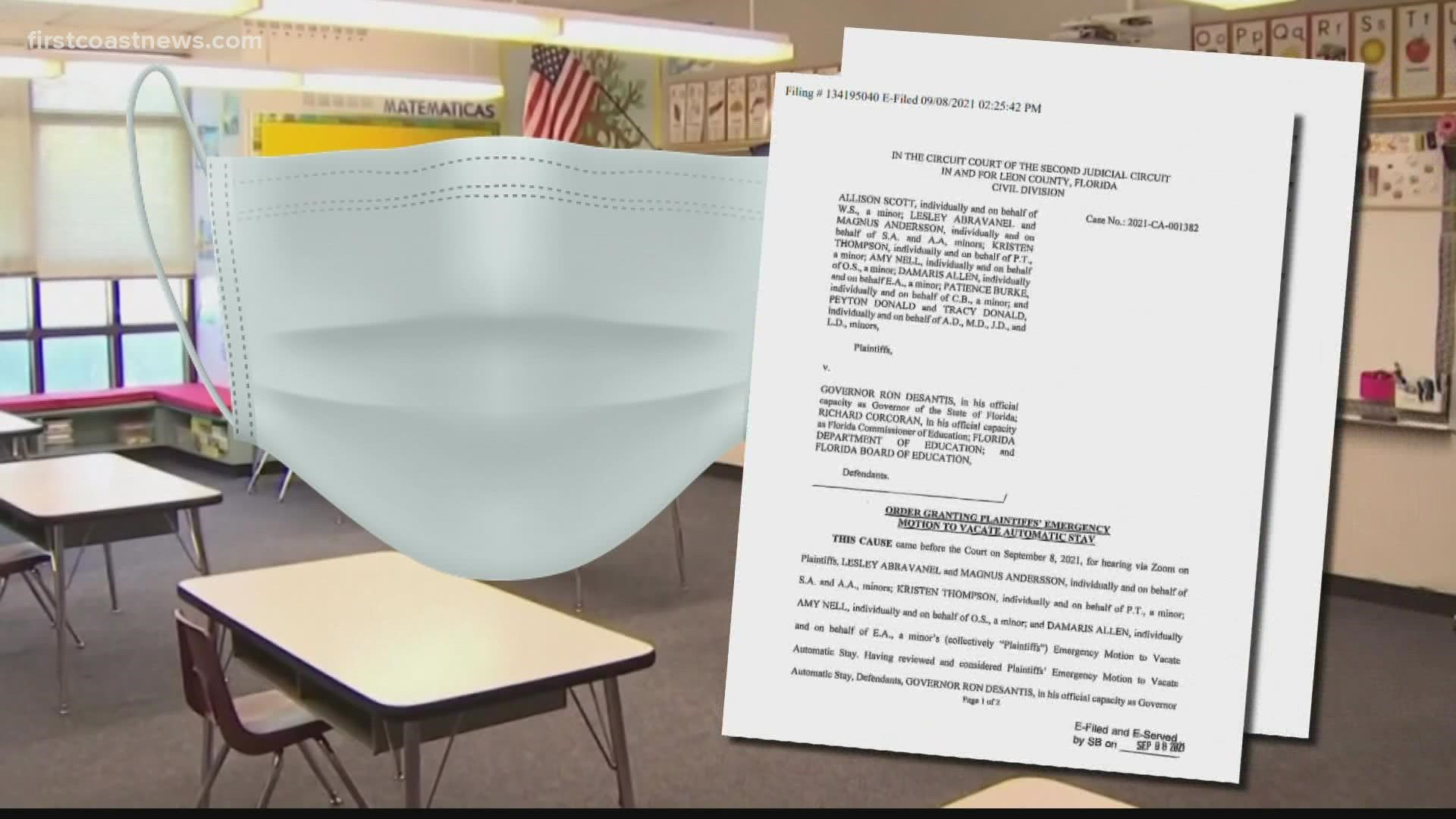 The On Your Side team found out what this means for one local school district whose mask mandate has been under investigation by the state.

Citing an immediate threat to children's health due to COVID-19, Judge Cooper lifted an automatic stay that had been put in place last week by the state's appeal.

“It was ironic because he said he doesn't think you've ever granted one before in the past during his career," said Charles Gallagher, the lead attorney representing the Florida parents suing the state. "He was remarking back about how he had denied plenty of them, but he didn't recall granting one. So, it was a bit of a mountain to climb.“

Gallagher believes the governor's office will now speed up its appeal process.

Despite the ongoing case, the Florida Department of Education has threatened to take away the salaries of school board members in districts where a mask mandate is in effect.

The Duval County School district was recently notified that it is under investigation for its mandate, which took effect Tuesday.

However, Gallagher said the state is no longer allowed to move forward with the investigation because of Wednesday’s decision.

“It means that they can act with their own discretion or own judgment in terms of backing mandates for their districts – without fear of any kind of financial penalties or withholdings," he explained.

Though, Gallagher added, he wouldn't be surprised if the state tried defying the judge's decision.

"I would not be surprised if they continue to double down as they have been over and over again," he said.

Duval County School Board Chair Elizabeth Andersen believes Wednesday's decision does not change anything for the district.

“I think as we were looking at moving forward with our mask requirement that includes the medical opt-out for families, we have continued to maintain that we feel like we are working within the rules set forth by the department of health and department of education," Andersen explained.

She added that the Department of Education has not gotten back with them after she and DCPS Superintendent Dr. Diana Greene responded to Education Commissioner Richard Corcoran's letter last week informing them of the investigation into the district’s mask mandate.

"I think the most important thing for the community to understand and be aware of is that our only priority is making sure, as elected school board members, we are able to help provide a safe and healthy learning environment where students can grow and be nurtured," Andersen said. "And then we're being fiscally responsible and good stewards of taxpayer dollars. And all of that goes into these decisions that we make. I think it's really not as political as some people might believe it to be."

Andersen also told First Coast News that the district is implementing other COVID-19 mitigation measures aside from masks, such as updating a lot of the air filtration in schools.

She said the district is waiting on the state to release more federal funding to cover new ventilation systems that are set to cost $10 million.