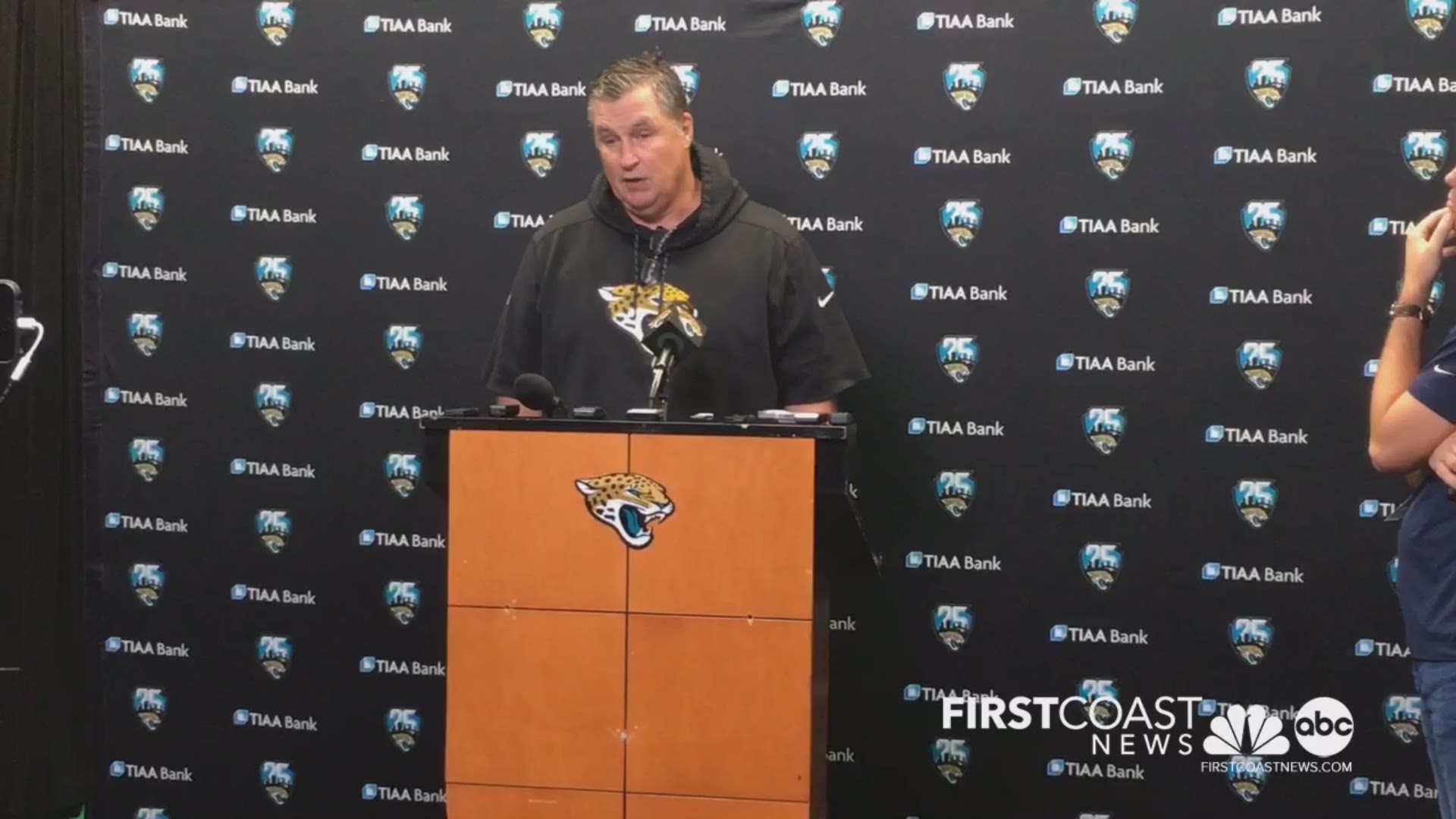 CHARLOTTE, N.C. — Throughout their two-game win streak, the Jacksonville Jaguars have maintained that they're not looking too far ahead: they're just focused on the next one.

Well this one might be the biggest one yet.

Jacksonville (2-2) travels to Charlotte, N.C., to take on the Carolina Panthers (2-2) in the two franchises' seventh-ever meeting Sunday. The meeting also comes in both teams' 25th anniversary seasons.

The Jags are coming off a walk-off, 26-24 win at Denver, while Carolina also won a nail-biter in Week Four, 16-10 over Houston. The Panthers, like the Jags, have won back-to-back games after starting the season 0-2.

Breaking Down the Offenses

Also like the Jaguars, the Panthers' success has come despite an injury to their starting quarterback, Cam Newton. Second-year pro Kyle Allen has flourished since taking over Ron Rivera's offense, throwing for four touchdowns in two games and posting a 71.7% completion percentage. Joining Allen in the Panthers' back-field is the NFL's leader in total and rushing yards this season, Christian McCaffrey.

Meanwhile, the Jaguars' own, back-up quarterback sensation, rookie Gardner Minshew, has thrown for over 900 yards and seven touchdowns in four games (three starts) this season, including leading the Jags on that game-winning drive in Denver. He got some help in the Mile High City from his running back, Leonard Fournette, who ran for a career high, 225 yards -- 190 of which came in the second half.

Minshew, who took a tough hit from Denver's Von Miller on the final drive of last week's game, was a full participant in Friday's final practice and is expected to start and be a full-go against the Panthers.

All-Pro corner-back Jalen Ramsey has already been ruled out for Sunday's contest with a back injury, just the second game he has missed in his career. Rookie tight end Josh Oliver was also ruled out with a hamstring injury for the fifth-straight week.

The Jaguars announced Saturday that nickel corner-back D.J. Hayden (foot) had been added to the injury report and is "Questionable" for the game against the Panthers. Hayden did travel with the team to Charlotte.

The Return of Sacksonville (again?)

After sacking Tennessee Titans' quarterback Marcus Mariota nine times in Week Three, the Jaguars heralded pass rush struggled to get to the Broncos' Joe Flacco a week ago. The Jags did record 15 pressures on the veteran QB, but did not register a sack.

Allen and a beat-up Carolina offensive line that will be without two starters might represent "Sacksonville's" next-best chance at a comeback. Allen has been sacked five times in his two starts this year, and he has also fumbled the ball five times.

Meanwhile, on the opposite sideline, the Panthers' defensive line has been one of the most surprising on the young season. As a team, they have combined for 18 sacks and 28.5 tackles for loss in four games. Minshew was sacked five times in Denver after taking zero sacks against the Titans, so the Panthers' pass rush will be just as eager as the Jags to get after the quarterback -- especially with their three, "Questionable" defensive starters (Gerald McCoy, Brian Burns and Eric Reid) all expected to go.

This battle of the Big Cats gets underway at 1 p.m. EST from Bank of America Stadium in Charlotte. The all-time series between the two is tied at three wins each.

First Coast News has a crew in North Carolina and will have live updates throughout and following the game.