iRacing: Giving sports fans something to cheer for 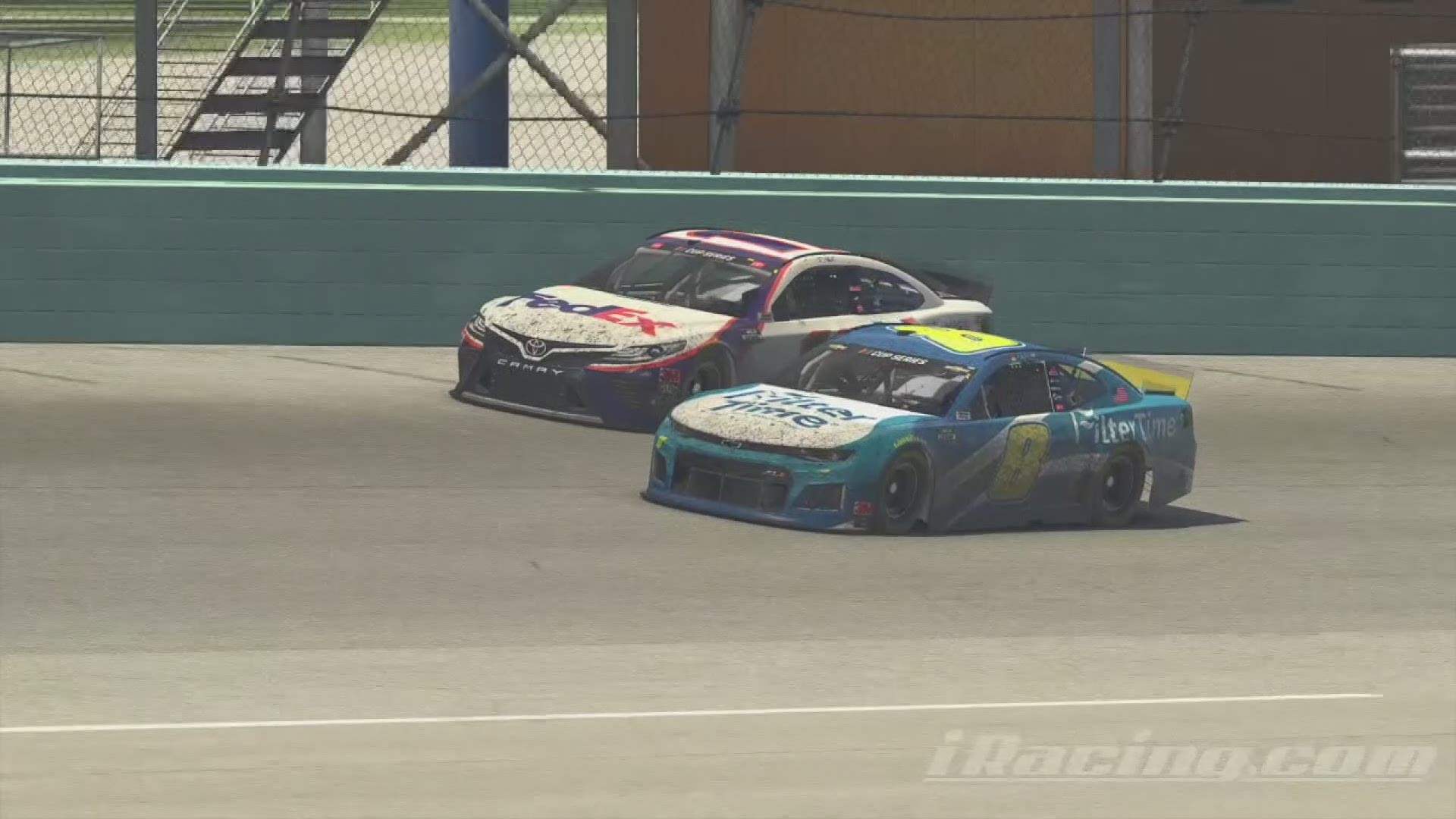 Ty Dillon's wife served as his crew chief and videographer.

All on national television.

"They’ve been trying to push it to the fans for years," Xfinity Series driver and long-time iRacer Chase Briscoe said prior to the Dixie Vodka 150 at a virtual, Homestead-Miami Speedway, the Series' first race. "Now, this is literally a golden opportunity in a bad situation to get more people to see what iRacing is.”

The names of virtual racing programs and devices have evolved over the years in the "eRacing" community. But what has remained the same: how they create these tracks. Programmers laser-scan major speedways to completely recreate  Daytona International Speedway, Homestead-Miami Speedway, and more.

"I think it's to the ten-thousandth of a millimeter [in terms of precision]," Briscoe said. "Every bump is in the racetrack.

"When you go to a place like Chicagoland [Speedway], for example. There's a huge bump in the middle between Turn's 3 and 4. And when you're in iRacing, that bump affects the car the same way it does in real life."

The "car" is where things differentiate a bit between a real-life NASCAR race.

While the virtual cars on the screen all look like a car you'd see at a standard, NASCAR race, the drivers' set-up's range from $400,000, virtual reality computer systems to a laptop and a steering wheel.

Ty Majeski, one of iRacing's winningest racers, opts for the latter. His career winning percentage? Over 80-percent.

"It's unbelievable how good he is with the most simple set-up you can get," Briscoe laughed.

While not every set-up features "motion," almost all of them feature a three-computer screen set-up. Briscoe's is set up in a separate office in his home. Clint Bowyer's is inside his actual rig, which he drove to FOX Motorsports headquarters for Sunday's race.

Ty Dillon's? It's in his guest room -- built last-minute, over the weekend prior to Sunday's first race. It's "a bit of an eyesore," according to his wife.

There are fans in the stands, but they are, of course, virtual. That's where, Dillon says, the biggest difference lies.

"The emotion of heat, smelling, the inside of the car. There's a whole different dynamic -- us race car drivers, we call it 'the feel,'" the Cup Series driver explained. "We wanna be able to feel the car move, we wanna be able to feel the car a certain way when you're driving.... there are some simulators -- I believe Denny Hamlin's is one -- that moves around when you're driving. It's quite expensive. And that helps with that 'feel.' But it's hard to beat that natural feeling of being in a car."

But during these trying times, these drivers will take any race they can get. Of which, on iRacing, there are quite a few beyond the Pro Invitational Series: there are races going on every day -- many for cash prizes -- that anyone can sign up for and join.

"Denny Hamlin and Dale [Earnhardt] Junior said [Sunday] they'd been racing together on there for two decades on their machines," Dillon said. "It kinda made me feel better when I finished 19th out of 32 [at Homestead]."

Added fellow Cup Series driver Garrett Smithley: "Denny was talking about racing with Dale Junior for 20 years. I'm only 27 so you do the math!"

Hamlin and Earnhardt are just two of the dozens of drivers who've spent hours, months and years on the iRacing platform. Sunday's virtual race at Homestead-Miami saw plenty of first timers on the iRacing circuit, Dillon included.

But Chase Briscoe said he's on iRacing at least once or twice a week. It's not just for fun or cash prizes.

"Racing is not like football or basketball where you can just go practice," Briscoe explained. "Getting on the computer is the only way you can go practice [in NASCAR]."

"When I first started racing, I was obsessed with trying to find anything that could make me better," Smithley added, noting he "tested" on iRacing more prior to Sunday's race than he ever had in his 11 years on the service.

As Sunday's race unfolded, a new element unfolded on live television: from the safety of their living room, garage or guest room, drivers were able to interact with their fans in real time.

“I think the fans enjoyed kinda seeing the behind the scenes of our personal view," Dillon said, adding he'd love to find a way to permanently fix an interactive camera into his real car. "There’s no other sport that you can get inside the office or the head of the athlete.”

FOX Sports did place several "pit reporters" in drivers' homes (while still social distancing) and was able to interview several drivers via phone while they drove. But many more drivers didn't have that luxury. So, their wives and children became their "camera crew," posting "post-race" interviews on their social media channels.

"[My wife and I] were answering questions [on Instagram live] about normal things in our house while we were racing," Dillon said.

NASCAR and FOX Sports announced jointly on Tuesday evening that the remaining iRacing Pro Invitational Series races will be broadcast on the FOX Sports family of networks through NASCAR's hiatus.

Its drivers couldn't be happier.

“For the first three or four days [of the COVID-19 pandemic], I was completely lost," Smithley, who is in his first year on the Cup Series, explained. Smithley noted how, while he travels for races on the weekends, his Monday's, Tuesday's, and Wednesday's are filled with interviews and sponsorship phone calls. With businesses closed, "it all came to a screeching halt."

Smithley was on the pole for the race at Homestead-Miami and finished fifth in what proved to be a thrilling finish to kick off the Series. Earnhardt and Hamlin both made late pushes, with this year's Daytona 500 champ edging the retired legend on the final turn. Briscoe finished fourth and fellow newcomer Timmy Hill finished third.

As fun as it was to wake up knowing he'd finished near some of NASCAR's most legendary drivers, there was something greater Smithley took away.

"[Monday] morning, I got up, got on Twitter, looked at some of the headlines, and I was like, 'man. We're seeing articles. We're seeing the same people tweet the same things [they normally would] about the race.'

Over 903,000 viewers tuned into the race on FS1, for what would prove to be the most "social TV program" on Sunday. NASCAR's various entities saw over one million engagements on their social channels.

“If we can provide any entertainment, us riders are usually the best at rallying together and putting on a good show," Dillon smiled.

"This shows that there is a way to get through this together.”

Results from the first iRacing Pro Invitational Series race can be found here. The next race is Sunday, March 29, 2020, from a virtual Texas Motor Speedway, beginning at 1 p.m. EST.