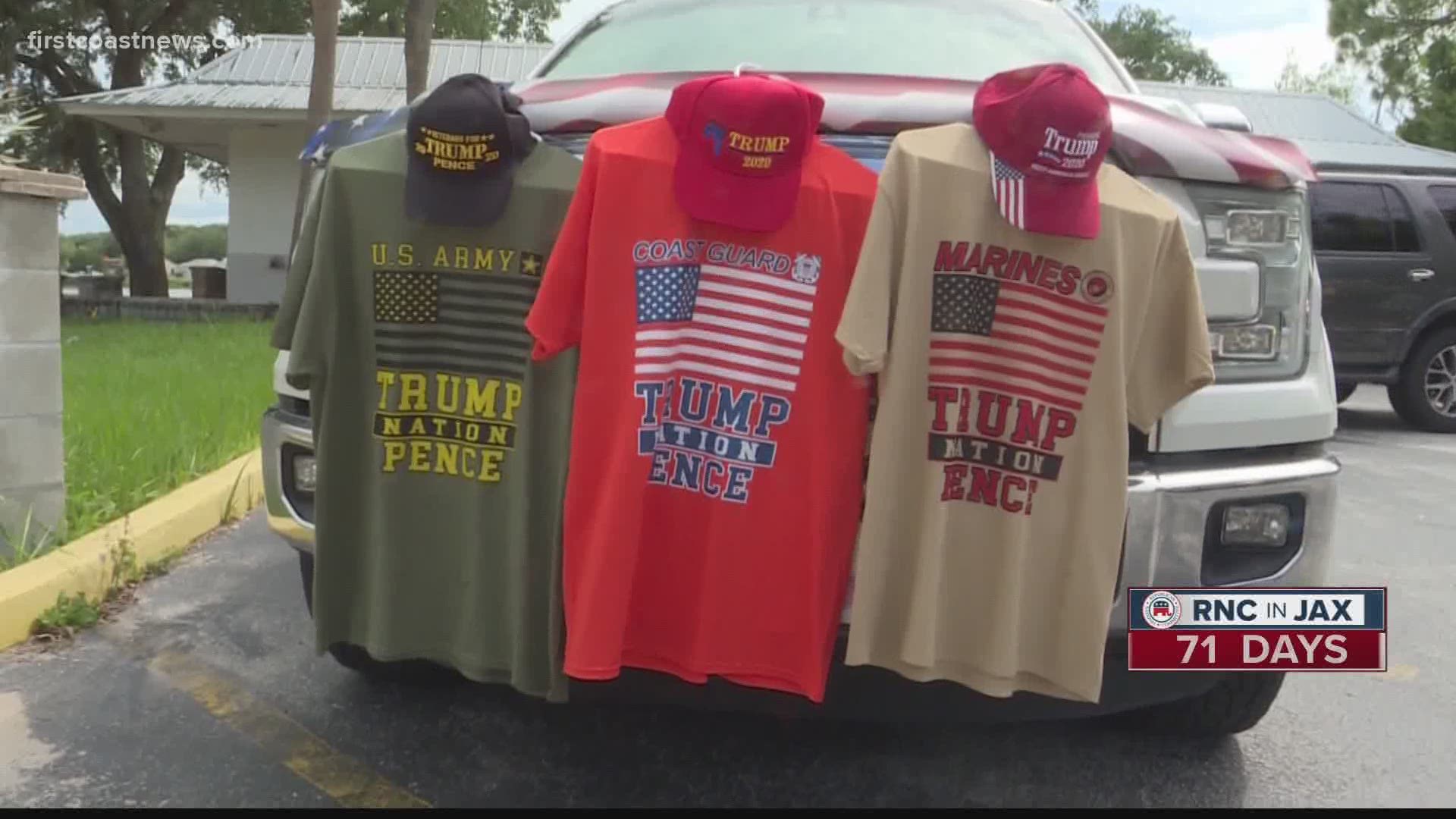 ST. AUGUSTINE, Fla. — As the First Coast prepares for the Republican National Convention this August, the proliferation of roadside pop-up stands supporting President Donald Trump seems to be growing in the region. First Coast News talked with Charles Davis, who said he’s been running his stand for about six weeks next to the southbound side of U.S. 1 in St. Augustine.

“It’s been fantastic,” Davis said. “We’ve been seeing a lot of support.”

That seeing was accompanied by the sound of many honking horns – apparently, another sign of support - as vehicles passed his stand near the intersection with Clark Street.

Davis explained that his stand is independent of any others in the area. He also detailed that while he designs of the merchandise, it is produced by suppliers. Most of the items sell in the $15 to $20 range. Davis said proceeds don’t go to the Trump re-election campaign, but that he doesn’t make a bottom-line profit either.

“We’re not really here to make money as much as we are to get [President Trump] elected," he said.

Perhaps ironically, Davis paraphrased one of history’s most iconic Democrats – John F. Kennedy – in explaining why, then, he has made so much effort supporting the Republican, Trump.

But Davis insisted that he’s not motivated by party lines, offering a non-partisan opinion of why the country is seeing what’s arguably the most prolific merchandising of a United States politician – incumbent or otherwise – ever.

Customer Ron Colbert of Clearwater, who pulled over to check out the merchandise, gave his viewpoint about the same observation.

“I think what [the merchandising] does is bring perspective into who this president is,” he said. “And I think also, you know, [President Trump] needs to be brought back in another four years. And the reason is because he tells the truth.”

Davis said it’s exciting that the RNC is coming to Jacksonville, which was announced earlier in the week, but, “Has it made our sales go up? We haven’t felt anything yet.”

And although a fairly steady stream of customers and honking drivers this Saturday afternoon seemed to indicate support, Davis said he gets resistance, which he takes in stride.

“[Police] come around and visit you because somebody may have called, who didn’t like Trump, or whatever," he said.

Asked about whatever permitting or zoning hurdles he had to clear in order to set up shop, Davis implied that he had permission from the owner of the lot. As of Saturday evening, First Coast News was still working to obtain clarification from city officials about what the requirements are.

“That’s more, probably, of a legal question, for somebody to answer than me, Davis said. “We’re here as patriots.”