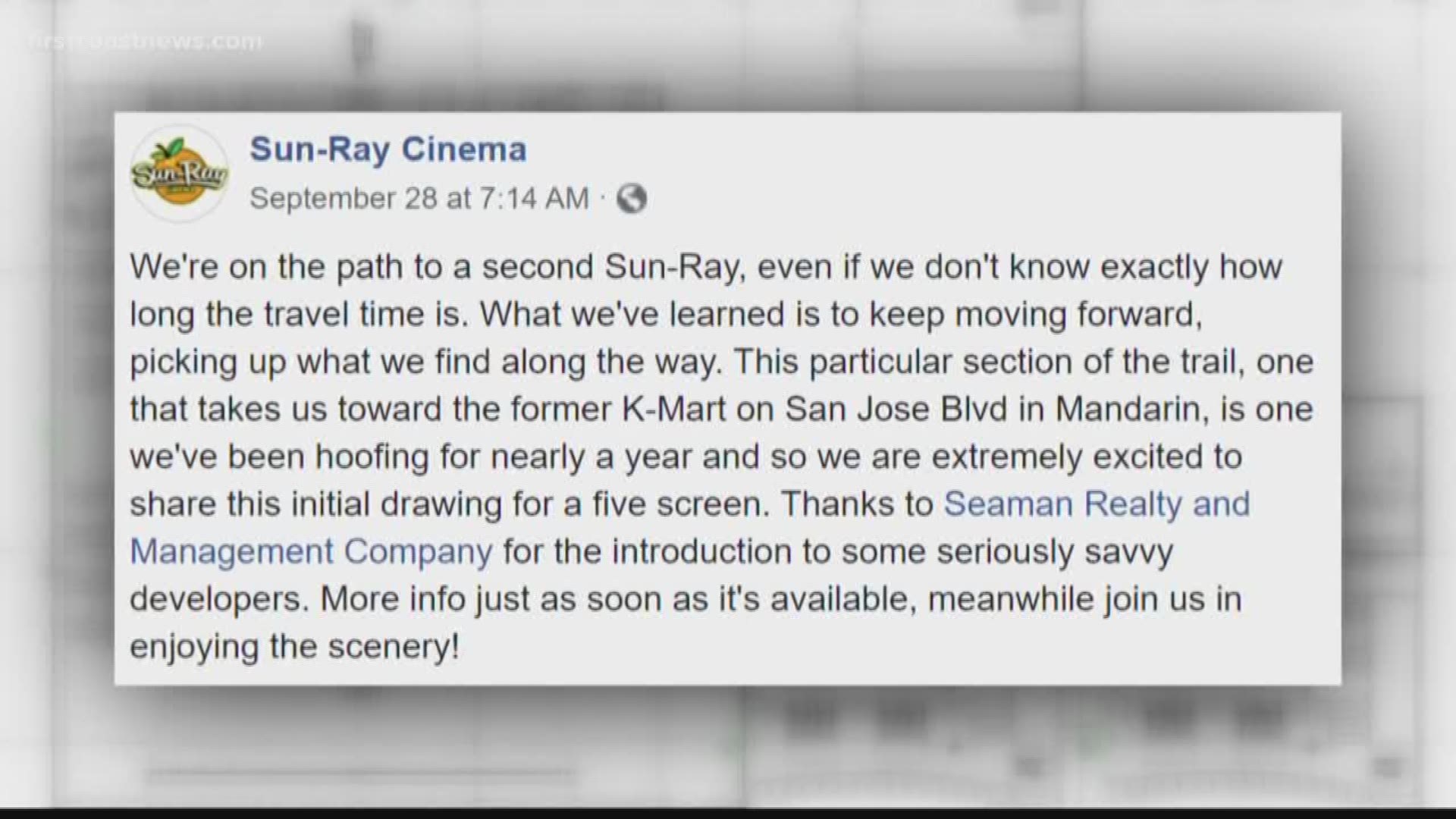 UPDATE May 12: These shows are sold out.

Sun-Ray Cinema is about to raise the curtain on its first pop-up drive-in movie night.

The Jacksonville movie theater in Five Points is hitting the road north to Callahan Speedway in Nassau County for two drive-in movie nights at the end of the month.

“Smokey and the Bandit” will top the play bill Friday, May 29, and “Mad Max: Fury Road” will be the feature presentation Saturday, May 30, said Shana David-Massett, co-owner with her husband, Tim, of Sun-Ray Cinema.

“It’s going to be a blast,” David-Massett said. “We’ve always thought this would be a great idea because we like showing movies to people,” she said.

David-Massett said she hopes the pop-up drive-in will become a regular event. They are keeping their eyes open for other possible locations, she said.

“We expect this will be the first of several pop-up drive-ins,” she said. “As often as it makes sense to have them, we’d like to have them.”

Also closed temporarily because of the pandemic, is Sun-Ray’s popular restaurant, Pizza Cave, just two doors down from the theater at 1028 Park St.

Opening a drive-in movie theater, David-Massett said, has been something the couple has wanted to do for a long time.

“We’ve been looking to grow Sun-Ray from the very beginning. We’ve looked at other locations for a potential drive-in pre-pandemic because we just loved the idea of executing the concept really, really well.”

Over the years, the couple has looked at former drive-ins as well as areas that might be converted but never found the right location for a permanent installation, she said.

Unfortunately, she said, most drive-ins are gone. And the world around them is now brighter and nosier than it was in the past.

The couple really wanted to keep showing movies the way they always have done it, with a lot of people getting together. Because of the pandemic, however, indoor movie theaters are out of the question.

“It seems right now in this environment, the drive-in is really the only safe way to do that other than at home with your Netflix,” she said

Amid 51 days of self-isolating together, the couple renewed their search for a drive-in location.

After many weeks of searching, they finally found the perfect spot for their inaugural pop-up drive-in — Callahan Speedway, she said.

“It’s really, really tough to find an open space in this area without an ambient light to interfere with the picture,” David-Massett said.

Callahan Speedway is the perfect venue and its owners were gracious and eager to let the couple try out their drive-in concept, she said.

“They have kindly opened up their field, as well as their bathrooms for this two-night only event,” Tim Massett said, announcing the pop-up drive-in on the cinema’s Facebook page Sunday.

Drive-in movie-goers are encouraged to bring their own snacks and beverages, David-Massett said, because the concession stand won’t be open due to social distancing rules.

Tim Massett said their friends at AVL Productions will be providing “a nice and bright 32 foot wide picture screen.” They also will provide “the big sound” that movie-goers will hear via their FM radio, he said.

“Shana and I are so excited to hang out around a big screen with you all again,” he posted.

The couple picked the two movies for their first two nights with the speedway in mind — a theme of fast cars driving on the road, David-Massett said.

“We watched a lot of movies and picked those two because we thought they were the right movies to watch in that space,” she said.

The bottom line, the couple said, is they want people to have a good time watching movies, whether it’s a drive-in or an indoor theater.