The fire at the Fusion Apartments, which luckily caused no injuries, took over 110 firefighters to contain. It also caused lane closures for parts of Sunday morning. 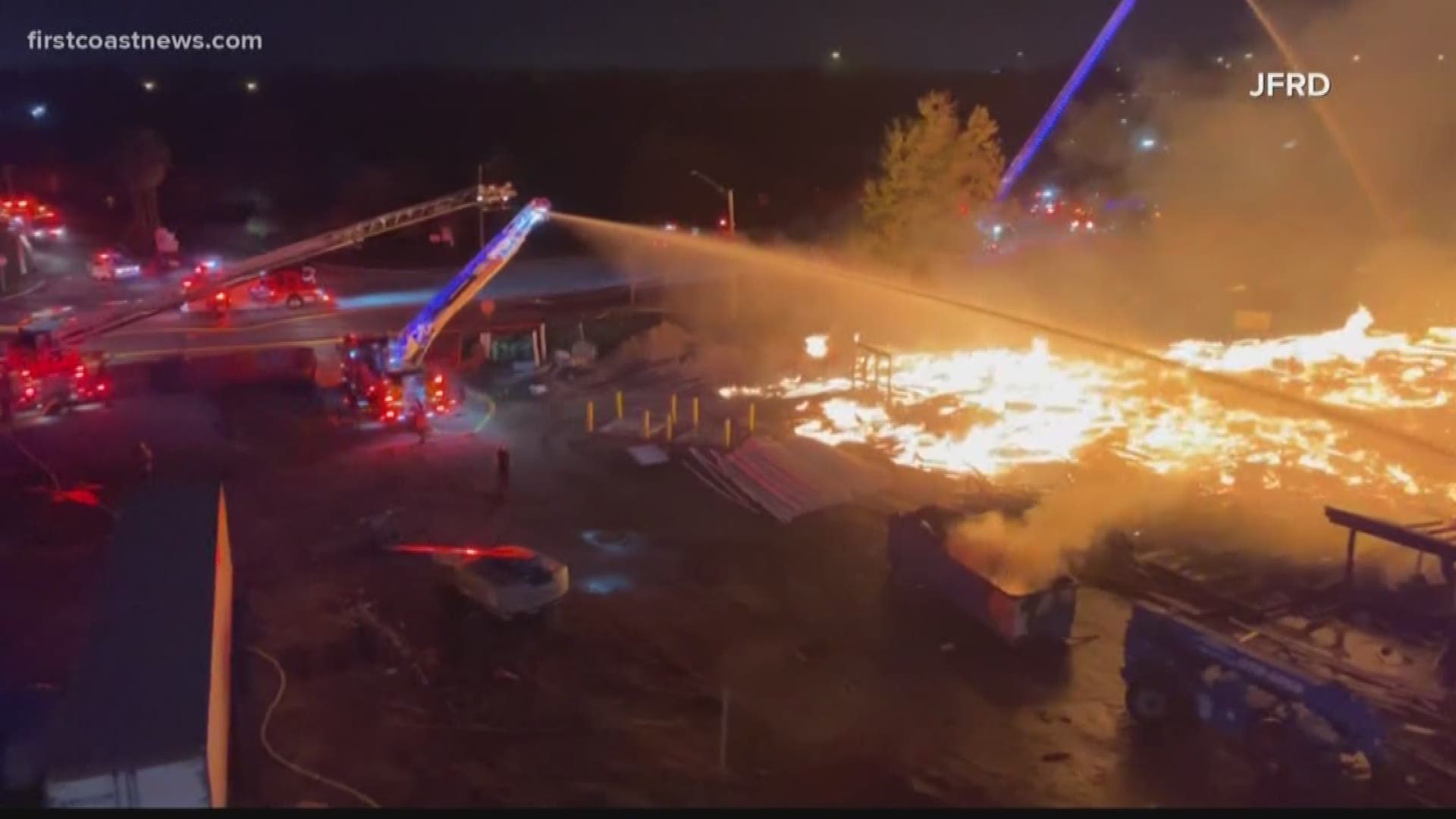 A massive 3-alarm fire in the Baymeadows area Sunday caused no injuries but required over 110 firefighters to contain, according to the Jacksonville Fire and Rescue Department.

The fire started just after 4:00 a.m., with JFRD tweeting their initial response notification at 4:25 a.m.

On scene, flames could be seen rising out of the Fusion Apartments complex, under construction at 8283 Baymeadows Rd. E. Viewers saw flames and smoke from miles around the area.

The fire quickly progressed to a 3-alarm fire with over 110 firefighters, 45 apparatus, 14 engines and 7 ladders responding to fight the flames.

JFRD Chief Keith Powers held a press briefing on scene, informing the public that there were no injuries but detailing the extent of the fire and the damage to the apartment building under construction.

"It just totally burned into the ground," Powers said. "It's totally disintegrated."

According to Powers, the fire spread to a wooded area behind the complex near the Hampton Park neighborhood. The fire also spread inside the parking garage located on the Fusion Apartments complex.

Neighbors in Hampton Park woke up to flames lapping near their backyards.

"I looked behind our house and some of the trees were on fire," said Hampton Park resident Vyki Barton. "I really was afraid for everybody in our subdivision, especially the ones that bordered up against where the flames were the highest."

Barton said she and other neighbors went door to door in the subdivision to wake people up, packing up valuables in their home and putting pets in crates.

The developers of Fusion Apartments were on scene in the morning as crews sprayed down the area with water, according to JFRD. On Your Side has reached out to the developers for comment.

Online, the company lists Fusion Apartments as slated to open Spring 2020. It remains unclear how that timeline will shift, although a captain with JFRD said they do not believe there was structural damage to the other building on the complex.

"The men and women did a phenomenal job with this," Powers said. "What they were facing when they got here, it was an extremely large fire."

The cause of the fire is under investigation by the State Fire Marshall.

According to its website, the company has offices in both Jacksonville and Atlanta, and has several other projects under construction around Jacksonville. First Coast News reached out to  Fusion Rental Community LLC, and the builders, Summit Contracting Group and are waiting to hear back.

Lanes of Baymeadows Road at Interstate-295 were closed as a result of the fire.