Ordinance 2020-0615, if passed, would carve out a provision for honorary street designations for first responders who died in the line of duty. 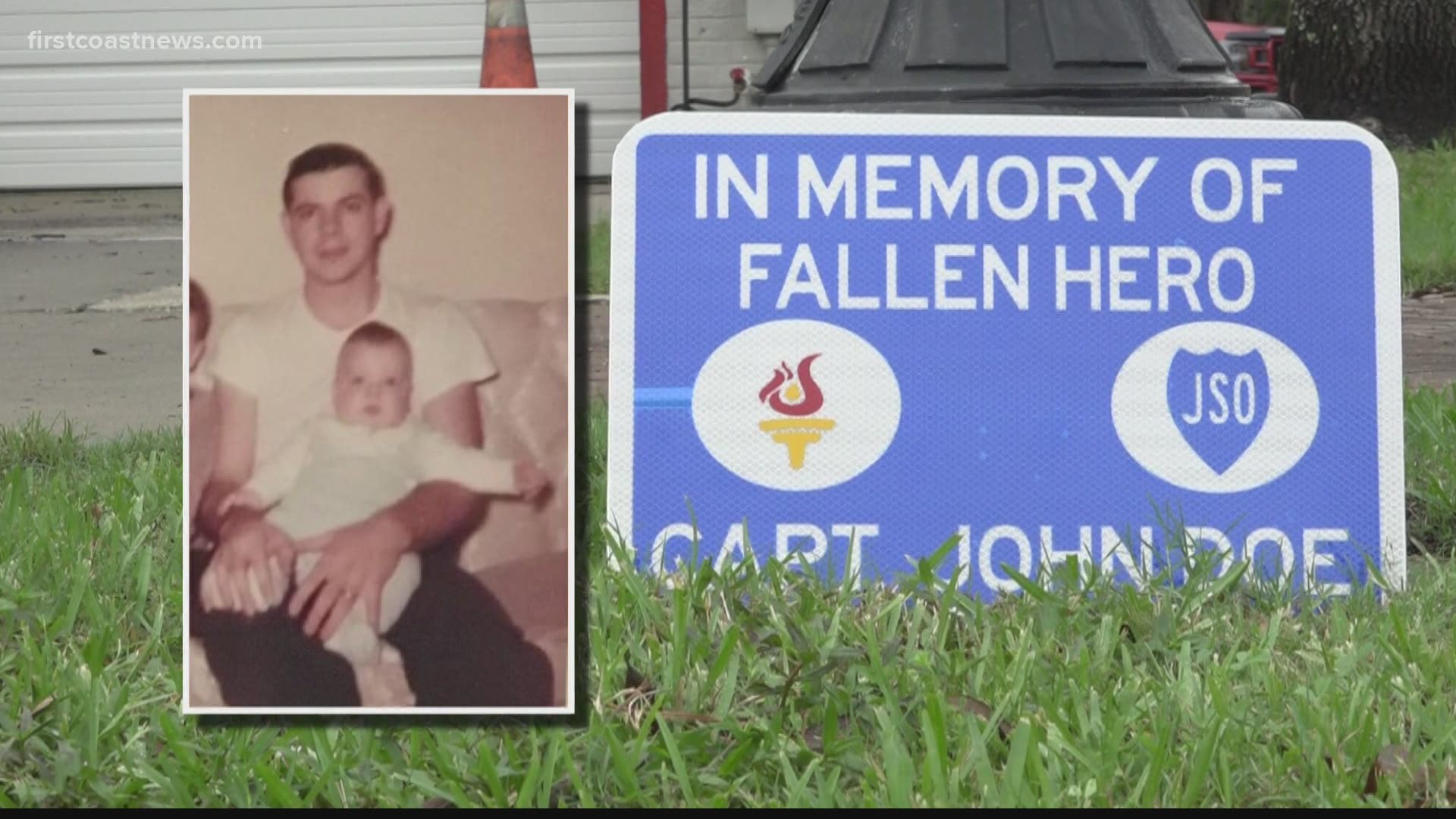 JACKSONVILLE, Fla. — A bill being considered by Jacksonville City Council would create a new designation to honor fallen first responders who lost their lives while serving the community.

The loss of a first responder has ripple effects throughout the community in which they served. But it's the families who have to endure the burden of loss for the rest of their lives.

Mollie Granger knows that burden, and has lived with it for 52 years.

"As long as I knew him, it was what he really wanted to do, to be a firefighter," she said of her first husband, Walter Whitney Flowers.

Flowers, a former Army medic, joined the Jacksonville Fire and Rescue Department in 1968 at the age of 30. He and Granger had been married for six-and-a-half years, and had four boys together.

She said he got to know some firefighters at Station 13 in San Marco while he was managing a local grocery store.

"It had been his lifelong dream to be a part of the firefighters and especially the group in San Marco that he knew so well," Granger said.

Four months after joining JFRD, on Christmas Day in '68, Granger and the boys dropped Flowers off for work at the station.

"It was the first time either of us had had to work on a Christmas," she said.

After dropping her husband off, Granger went to her parents' home for the day. Later in the afternoon, she took three of the boys back home before she would get ready for a Christmas dinner at the station with Flowers and other firefighters.

"I just had this overwhelming something that told me to go home," she said. "I did, and I no sooner got in the house then there was a phone call from a lieutenant with the fire department."

The fire department sent a car to pick up Granger and take her to Baptist Hospital. When she arrived, she learned Flowers had died in an accident.

"My first thought was, 'How do you tell four babies their father is never coming home?'" she said.

Credit: WTLV
JFRD firefighter Walter Flowers prior to his passing in 1968.

The accident happened at a railroad crossing on Atlantic Boulevard, just blocks from the station. Flowers and his crew were responding to a call of a brush fire next to the tracks, and the engine was struck by the train that made the call, Granger said.

"It started a whole new life for us," she said. "We were going to grow older together."

Now, 52 years after that fateful day, a bill in city council would establish a special honorary designation for Flowers and all other local first responders killed in the line of duty.

Ordinance 2020-0615, if it passes in council, would amend the city's street naming codes to carve out a subsection for a designation specifically for first responders.

A sign with the name of the fallen responder and an emblem would be featured on city property near where the life was lost.

"If somebody has paid the ultimate sacrifice of giving their life to protect anybody in our city, it needs to be recognized," said Councilman Al Ferraro, who is spearheading the bill.

Currently, honorary street designations in Jacksonville do not specify whether the designee was a fallen first responder.

If the bill, which has already garnered wide-ranging support, is approved, blue signs with a badge or emblem specific to that responder's agency would be used to recognize that person's service.

"This was a concerted effort to recognize these families in our community, to show the strength of how we feel about this," Ferraro said.

The bill has been around two-and-a-half years in the making, with coordination between council and local groups.

"It will forever memorialize their memory for the families, and it will be a constant reminder to our community of the sacrifices they made while serving," said Steve Zona, President of the local Fraternal Order of Police. "We hope all of council will support this worthy legislation."

For Granger and her surviving children, the legislation is a reminder of her late husband's selfless service to a community in which they both grew up.

"His service to the community was so important to him," she said. "It's a huge honor, especially since it's been so long. It does something good and helps to remember the good is absolutely vital for all of us to heal and repair."

Credit: WTLV
An emblem of the Fraternal Order of Police at the Fallen Officers Memorial Wall.

RELATED: Fallen firefighter's daughter gets escort to her first day of school