By 5 p.m. Tuesday, the site administered nearly the same amount it did all of Monday. Tuesday was the first day J&J was the only option for first doses. 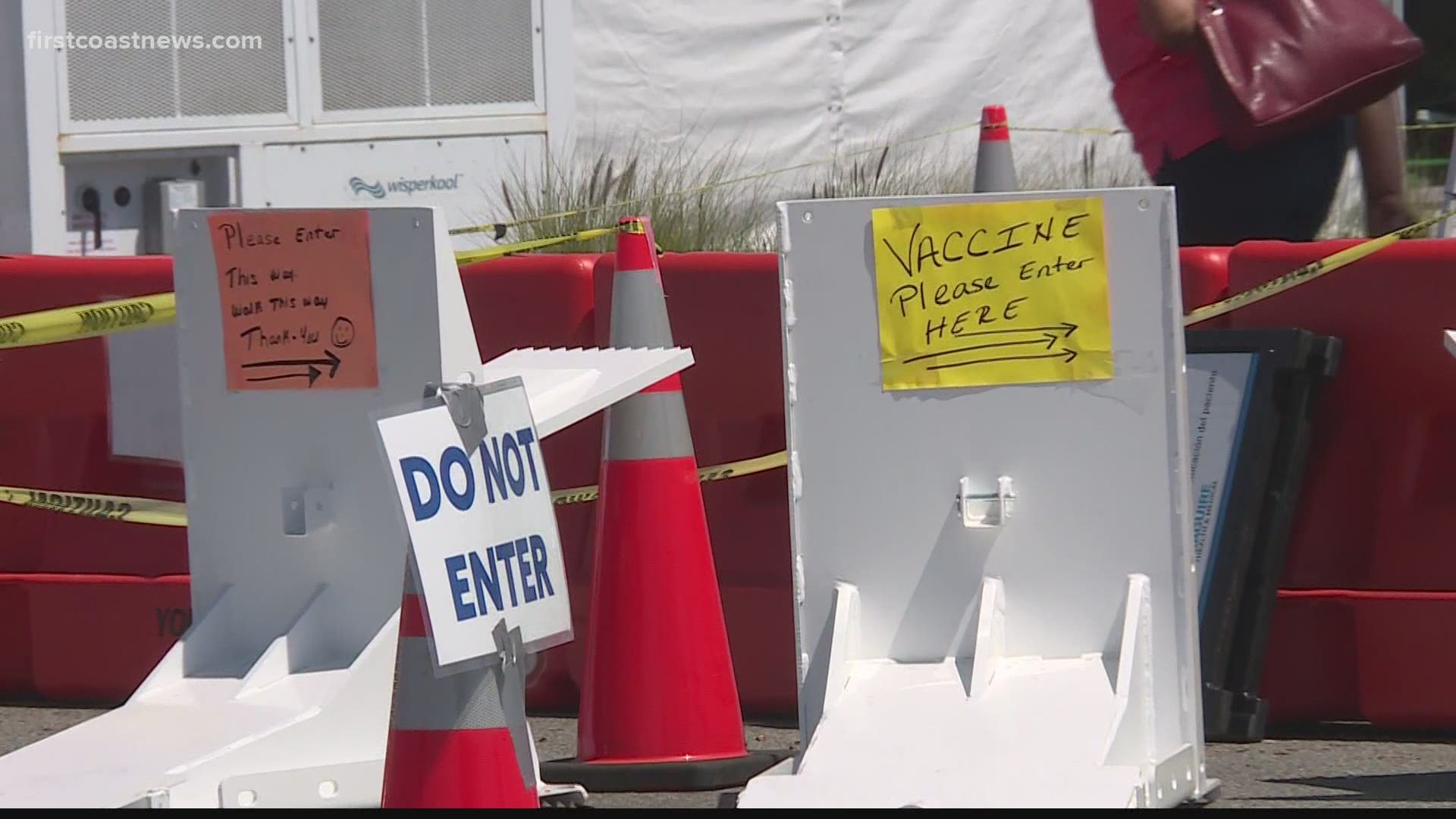 JACKSONVILLE, Fla. — On Tuesday morning just before 7 a.m., the line to get a COVID-19 vaccine at the Gateway site stretched into the parking lot. It was the first day the site saw a line that long.

It also marked the first day the Johnson & Johnson shot was the only option for first doses.

The line for #vaccines outside Gateway Mall is into the parking lot this morning. The PIO says don’t be discouraged by the line. It moves very fast. They have about 20 vaccination booths inside ready to process patients. @FCN2go pic.twitter.com/tmSl1sEaRj

The Pfizer/BioNTech COVID-19 vaccine will still be administered for second doses only. Site staff moved people through the line pretty fast. Site directors said they have the system down to a science.

Several people at the site said they came specifically for the one and done Johnson & Johnson shot.

“I’m terrified of needles," Latressa Allen, who got her J&J shot at Gateway Tuesday, said. "I know they’re not going to kill me, but if I had to do it I would rather have the one dose and be done with it."

A lot of people shared Allen's sentiment. Over the past few weeks at Gateway, people have even told First Coast News they would come back to the site when J&J was available.

“I was a little hesitant because I did not want to get the two vaccines, so I said, 'Well if Johnson & Johnson comes in my neighborhood, then I will get it," Allen said.

Eric Wolf, who got his J&J shot at Gateway Tuesday too, agreed with Allen.

“The Johnson and Johnson is only one and done, and so after that, you sit down for the observation. And now I’m done so now I’m ready to rock and roll," Wolf said.

Both Allen and Wolf said the longest wait was the 15-minute observation period afterward.

“You might not see a line out here, but they have a small line and they have a little set up [inside]," Allen said.

"The tables are pretty full and when one person gets up, they wipe the table and chair down and the next person goes there," she said.

According to site directors, Tuesday morning there was no wait to get registered. Between registration and getting the shot took about 5 to 10 minutes.

Allen said the shot signified more than just hope to end the pandemic for her.

"It was a big deal to me to get it and be through with it," she said.

Allen battled COVID in August. She was hospitalized for four days with the virus and pneumonia, and her kidneys were failing.

"It hit me like a ton of bricks," Allen recalled. "It really did. It wasn't anything nice, I can say that. It's not an experience I would wish on anybody."

Despite her hospitalization, Allen said, she was initially skeptical about the shot. It took a family member sharing her positive experience, and lack of side effects after getting the shot to convince Allen.

Wolf said he was initially hesitant to get the vaccine too.

"Personally, I wanted to wait until [...] and then once I was seeing more results of it and everything, I said, 'Ok, might as well get it,'" Wolf said.

"As far as it being rushed [the vaccine], it’s better to get it over with than to wait and wait until it’s too late," Wolf continued. "I tell everybody, I'm like, 'Hey. It's better to go ahead and get it and be safe.'"

Wolf said he's an AAU basketball coach and also wanted to keep the kids he coaches safe by getting the shot.

As of 1 p.m. Tuesday, the second day those 16 and older in Florida could get the vaccine, Gateway administered 1,130 doses. Johnson & Johnson accounted for 871 of those doses. Pfizer second doses accounted for 259.

According to the state spokesperson on site, 1,130 doses have been administered as one p.m. 871 are J&J first doses, 259 are Pfizer second doses.

By five p.m., Gateway almost surpassed Monday's numbers. A total of 1,677 doses were administered. Johnson & Johnson accounted for 1,284 of those doses. Pfizer second doses accounted for 393.

The seven sites in Jacksonville overall saw higher numbers Monday than they've seen in the past.

The seven sites totaled 6,152 Monday, using about 96 percent of their total capacity, compared to 3,883 Sunday.