While this is the goal with every whale calf, it's rarely caught on camera. 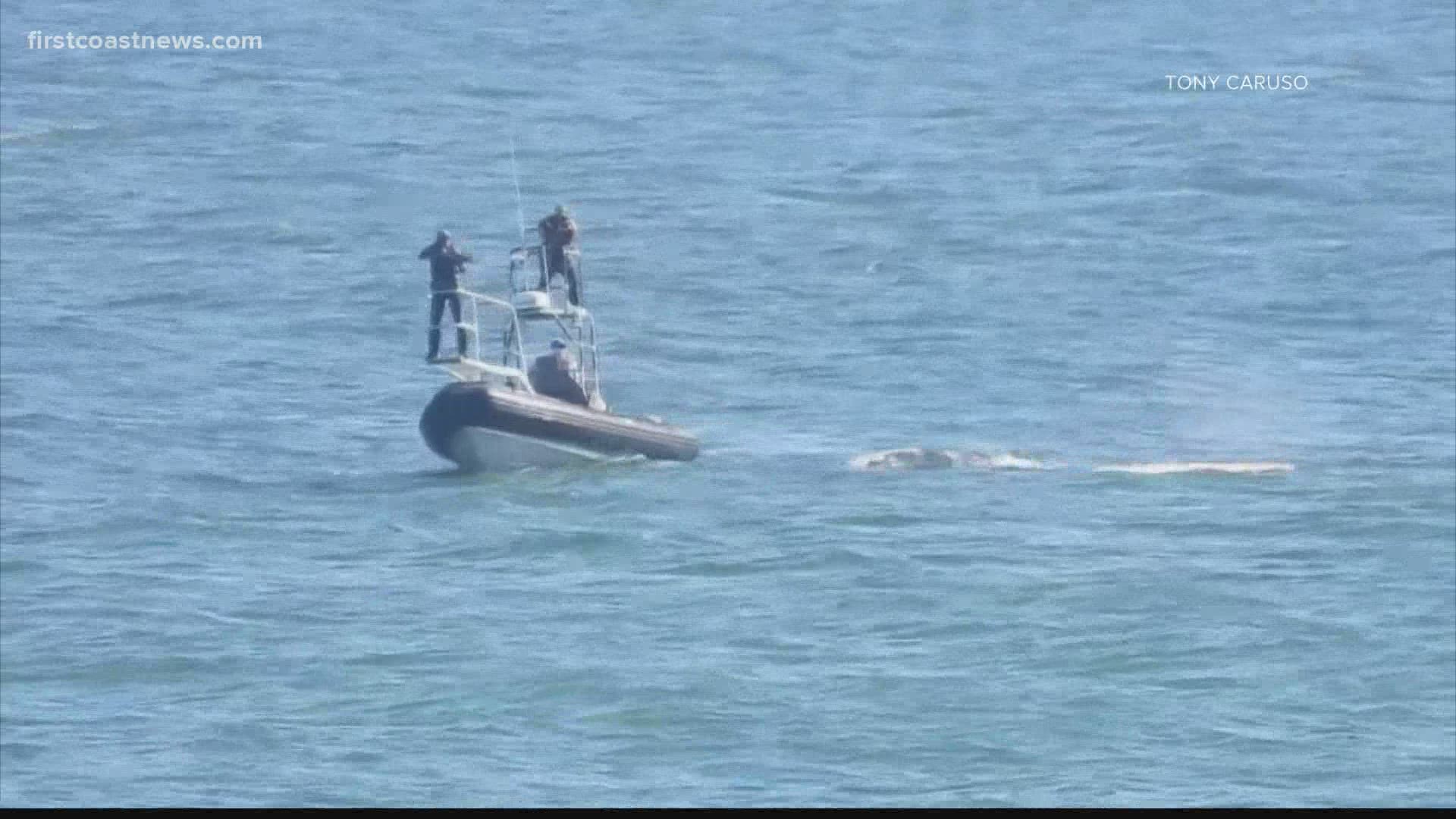 FLAGLER BEACH, Fla. — Video caught something that we here on land don’t get to see very often, which is a whale calf DNA sample.

This is the time of year,  the endangered species migrates to northeast Florida waters to give birth.

Off Flagler Beach, Wednesday morning, a mother Right Whale and her new calf splashed in the waves.

"My phone rang with the report," Jim Hain, Senior Scientist for the Marineland Right Whale Project said. He cranked up his telephone chain, calling the state and his team of volunteers.

"We needed a drone, needed to connect with a boat, and get photos," he said.

Volunteers quickly took to the beach. By phone, they directed the Florida Fish and Wildlife Conservation Commission team who were on a boat to the mother and baby.

The goal is for the boat to get close enough to the calf to get a DNA sample from it. The captain’s job is tricky.

"She is very capable and also very careful. She’s had a lot of experience with approaching whales in a benign manner. And that's a skill," Hain said!

An archer aboard collected the DNA using a modified arrow.

The tip of that altered arrow pulls a small amount of skin and blubber from the calf. The sample is the size of a pencil eraser. Biologists say it doesn’t really hurt the calf.

The state team has a special permit to get so close. Typically, you have to stay 500 yards away.

First Coast News asked if the mother whale "puts up a fuss" when the boat gets that close to the calf and Hain said, "Well, it would if you weren’t being too careful. She’d be putting up quite a fuss. Because the mother’s very protective, as you can imagine."

But Wednesday, the mother did not protest, and the state team was able to collect a sample.

The DNA is used to help identify the calf because it doesn’t have markings on its skin yet. Those markings are how adult Right Whales are identified.

When the calves migrate back north, a second DNA sample is collected and used for comparison.

"We need to learn about the life history of the animal and where they’re going and what they’re health it," Hain said.

Knowing more about the whales helps in the conservation of them. North Atlantic Right Whales are on the edge of extinction, with about 400 left.

It turns out this mother whale seen Wednesday is named Chimenea.

"She was first seen as a calf on the Florida calving grounds," Hain explained. That was 13 years ago.

"And this is her first calf. So hooray hooray!  You just cross your fingers and hope for the very best," Hain said.

This is a blessing of hope for a diminishing breed.