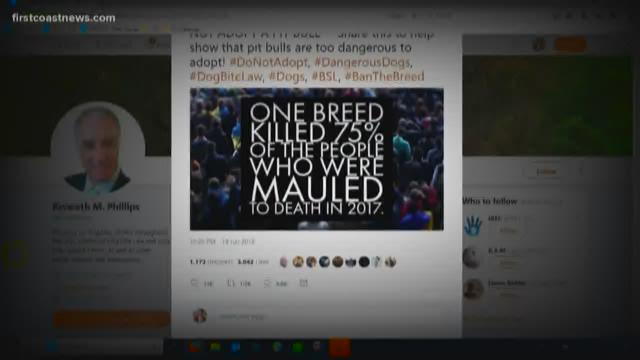 After he placed the ad on Twitter, it was viewed more than 6 million times.

Kenneth Philips said he created the ad because he's frustrated by the number of people injured or killed by the breed.

“I do this in Florida and all across the nation,” Philips stated in a message to First Coast News. "I have been doing this for 25 years ... I follow all of the major cases and study all the reports of deaths and disfigurements.

“One of the worst issues is the intentional concealment of the breed of a dog, by official government shelters as well as rescue groups,” Philips stated.

Many dog lovers reject the ad and say it's not accurate.

"It saddens me that it's getting so much attention, that it's being shared so much on social media," Dean said.

Millions of people on social media sharing the add or commenting on it are saying it's slated to run during the Super Bowl.

FCN's Eric Alvarez will tell you if that's accurate and he'll have much more on this story. WATCH First Coast ON YOUR SIDE at 5:30 p.m. and 6 p.m.

SUPER BOWL COMMERCIAL THAT SAYS "DO NOT ADOPT A PIT BULL" - Share this to help show that pit bulls are too dangerous to adopt! #DoNotAdopt, #DangerousDogs, #DogBiteLaw, #Dogs, #BSL, #BanTheBreed pic.twitter.com/ybNxkcI5M9