A TUTT, or tropical upper tropospheric trough, means rain for Florida to end off the work week. These types of systems can act as a double agent in the tropics, too. 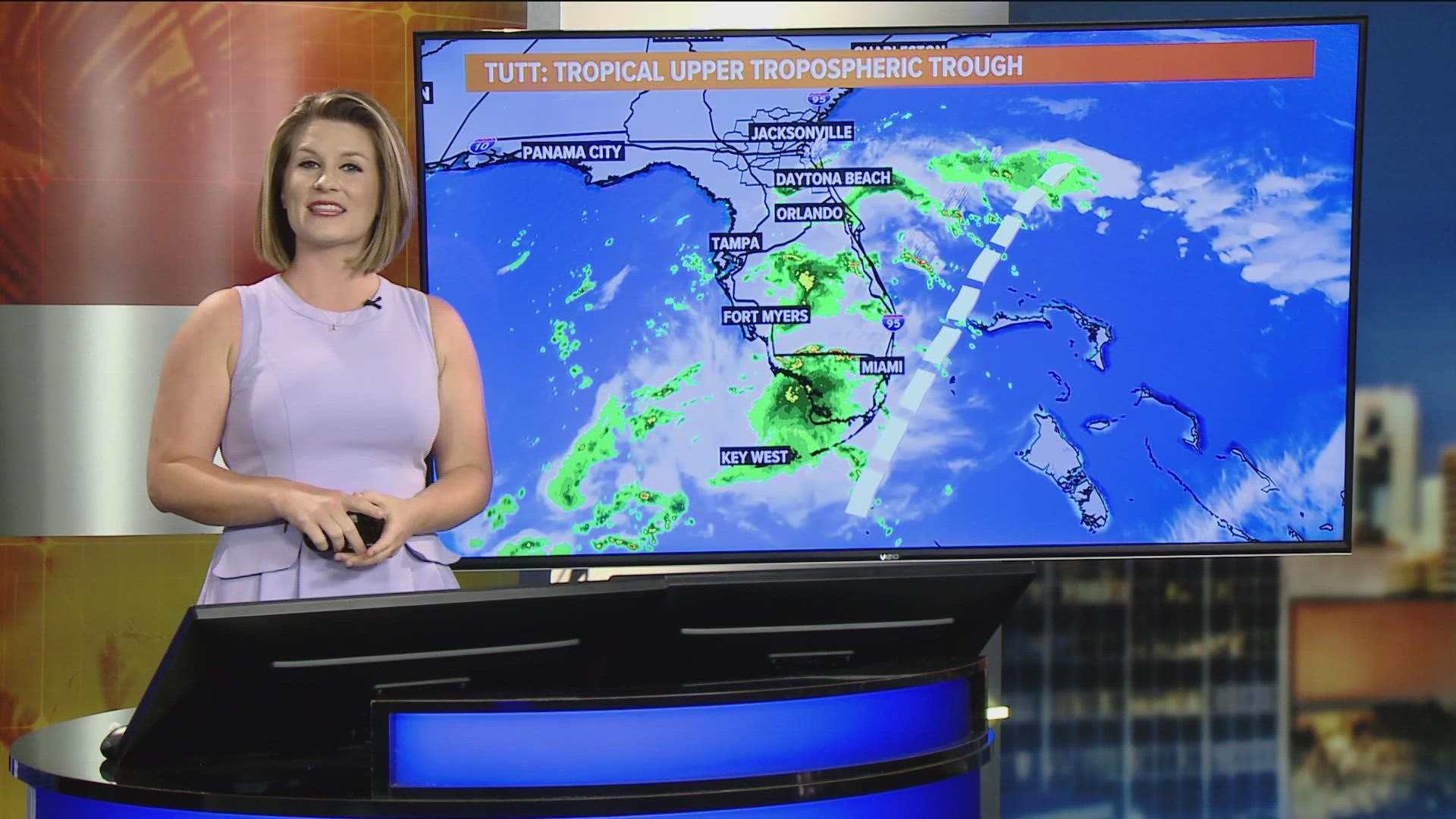 JACKSONVILLE, Fla. — The Sunshine State is being impacted by a meteorological feature this week that is helping to enhance rain chances, especially along the Atlantic coast. These types of systems also can be a double agent when it comes to tropical development.

First things first, it's called a Tropical Upper Tropospheric Trough. Say that five times fast, or we can just call it by the acronym "TUTT."

Defined, a TUTT is a cut-off low in the tropics at the upper levels of the atmosphere. TUTTs typically begin to appear in June, are at their strongest in July and August, and begin to fizzle through September with the season change.

TUTTs can be weaker or stronger throughout the summer months. Typically, the stronger the feature, the greater chance for thunderstorm chances depending on its proximity to the peninsula.

For example, this week the TUTT is moving northwest across Florida. This means, showers and storms are more likely to move in from the coast with the persistent onshore wind.

RELATED: TROPICS: Invest 99L a concern for TX and LA this weekend, early next week

There's another side to these TUTTs as well and they are important when it comes to forecasting tropical storms and hurricanes. They can act in one of two ways -- helping to strengthen OR weaken a system. On one hand, TUTTs can force large amounts of vertical wind shear over tropical disturbances, which may inhibit their development by ripping their developing thunderstorms apart. On the other hand, TUTTs can assist in cyclone genesis and intensification by providing additional lift in the atmosphere near the storm's center. TUTTs can also allow a cyclone to breath more efficiently by allowing an outflow channel in the upper troposphere.

As we watch the developing cyclone headed into the Gulf of Mexico this weekend, we'll have to also track the movement and strength of the TUTT that's currently focused over the Sunshine State this week. It's forecast to move west into the Gulf and weaken, which could allow the potential cyclone to strengthen with a more favorable environment on top of very warm sea-surface temperatures.

For all of the latest on what's happening in the tropics, stay tuned for updates on our main tropical article. Visit our Hurricane Central page for all you need to know to keep you and your family safe this season.

RELATED: Saharan dust has arrived over Florida with another batch in the Atlantic; What it means for hurricane season