Power outages in Florida are skyrocketing due to Hurricane Irma

Power outages are rapidly on the rise as Hurricane Irma starts making her way across the state of Florida.

Power outages are rapidly on the rise as Hurricane Irma starts making her way across the state of Florida.

An interactive map showing real-time updates on the power outages across Florida has been released by PowerOutage.us.

As of 6:30 p.m., more than 5.7 million accounts were without power. However that number is increasing by the minute. It is hard to predict when and if the power will be knocked out in your area on the First Coast but our Storm Expert team has advised that you be prepared to be in your home for 4 -5 days without power in the worst case scenario.

The Jacksonville Sheriff's Office reported as of midnight Monday, Sept. 11 that there were 33,000 without power in Duval County, a sharp increase from the 12,930 that were out as of 10 p.m. Sunday.

As of 6:30 p.m. Monday, the JEA outage map showed that approximately 238,205 customers were without power in Duval and St. Johns Counties.

The City of Green Cove Springs Government posted a message on Facebook at 10 p.m. Sunday saying electric crews were ceasing operations for the night.

"Due to wind speeds Electric crews will cease response calls for the evening," Green Cove Springs Government said. "They will begin again on Monday once conditions improve. Please stay indoors and be safe."

Statewide, there are over 3.6 million FPL customers who are currently without power as of 3:40 a.m., according to PowerOutage.us. Of those outages, 124,598 are in Volusia County and another 21,866 in Nassau.

A majority of FPL outages remain in Brevard, Broward, Miami-dade and Palm Beach Counties, where Hurricane Irma's force was felt on Sunday.

Three outages on Jacksonville's Northside, along Lem Turner Rd. and I-95, are affecting around 10,000 JEA customers. Outages are being assessed, according to the JEA outage map.

To the southwest, there are approximately 16,000 customers in Putnam County currently without power, according to the Clay Electric outage map. In Columbia County, nearly 100 percent of Clay Electric customers are currently dark, as of 6:30 p.m.

Outages in Clay County, according to the Clay Electric outage map, have increased to around 61 percent as of 6:30 a.m. Nearly 48,000 customers are currently without power.

As of 5 a.m., FPL outages continue in St. Johns County. There are now 65,460 customers without power, or approximately 75 percent of the county.

Statewide, outages continue to increase in almost every area except for the panhandle.

Close to 100 percent of FPL customers in Nassau County are currently without power, according to the company's outage map.

Similarly, FPL and Clay Electric outages in Bradford County have left nearly all county residents without power. A total of 5,381 Clay Electric customers and 3,720 FPL customers are currently in the dark.

As of 6 a.m. Monday, outages continue to be seen across Northeast Florida. A total of 10 JEA outages on Jacksonville's Westside has left more than 23,000 customers without power. A total of 230,413 customers are without power across Duval County and parts of Nassau and St. Johns.

FPL customers without power in St. Johns County have now increased to 66,370, as of 6 a.m. Monday.

As of 7 a.m. Monday, JEA power outages seen on Jacksonville's Westside have continually increased, resulting in more than 58,000 customers without power.

Citywide, there are more than 180 active electric outages and more than 267,000 customers without power.

Out of the total 171,186 customers that Clay Electric services, more than 128,000 of them are without power, according to the company's outage map at 7 a.m.

All of FPL's customers in Clay and Duval Counties are currently without power, as well as 99 percent of those in Nassau County.

It is currently unsafe for @BeachesEnergy crews to be out. Crews will resume as soon as the winds subside and it is safe to head back out.

The City of Jacksonville Beach Government said on Twitter early Monday morning that most Beaches Energy customers are currently without power.

"We know most @BeachesEnergy customers are without power," the city municipality tweeted. "We are currently assessing damage. We will send out crews when it is safe to do so."

As of 8:30 a.m. Monday, there are 192 active JEA electric outages across Jacksonville, affecting more than 260,000 customers. Some of the biggest outages are still on Jacksonville's Westside and Northside.

If you encounter down power lines, please stay away and call 630-CITY in Duval or 911 in other counties. #HurricaneIrma pic.twitter.com/qPioqDgC7p

Statewide, over 5.7 million customers are now without power, according to PowerOutage.

The FPL outage map went down around 8:30 a.m. and no further information regarding outages in St. Johns County can be found at this time.

In Southeast Georgia numerous power outages have left thousands without power as Hurricane Irma passes up the west coast of Florida.

As of 8 a.m. Monday, there were over 180,000 customers without power in all of Georgia, according to the Georgia Power alert messaging system.

"As Hurricane Irma passes thru Georgia, Georgia Power is ready and plans to respond to power outages as quickly and safely as possible with approximately 3,400 field personnel," a Georgia Power alert message reads. "Crews are standing by and will begin restoring power when it is safe to do so."

As of 9 a.m. Monday, the Georgia Power outage map showed that over 17,000 of its customers in the Kings Bay area are without power. There are approximately 76 outages in that area.

As of 11 a.m. Monday, Irma has been downgraded to a tropical storm, but more than 260,000 JEA customers remain without power. The number of outages has increased to 199.

In Southeast Georgia, approximately 66,874 Georgia Power customers in Charlton, Camden and Glynn Counties are without power, as Irma slowly starts to dissipate over Florida. A majority of those outages are currently being seen in Glynn County, according to the Georgia Power outage map, where a tornado warning remains in effect.

As of 2 p.m. Monday, approximately 250,000 JEA customers remain without power across Duval County. There are over 200 active electric outages that stretch from Nassau County down to St. Johns.

A majority of Beaches Energy customers in Jacksonville remain powerless as of Monday afternoon. The company left a voicemail statement to its customers around 2:30 p.m.

“Beaches Energy services currently has all available crews deployed in an effort to remove fallen trees and repair damage to our transmission lines from the mainland," the Beaches Energy voicemail said. "Once these lines have been repaired we will begin to restore power to a large portion of our service territory in the next several hours, then we can begin to concentrate on smaller isolated pockets of outages.”

Approximately 150,000 Clay Electric customers remain without energy as of 2 p.m. A majority of the outages exist in Clay County, where 84 percent of customers have been affected.

Statewide, there are more than 5.9 million electric customers who remain without power, as of 2 p.m.

1 / 85
Viewer Lena Joseph shared this photo of a large tree knocked down on Melson Avenue by the church. 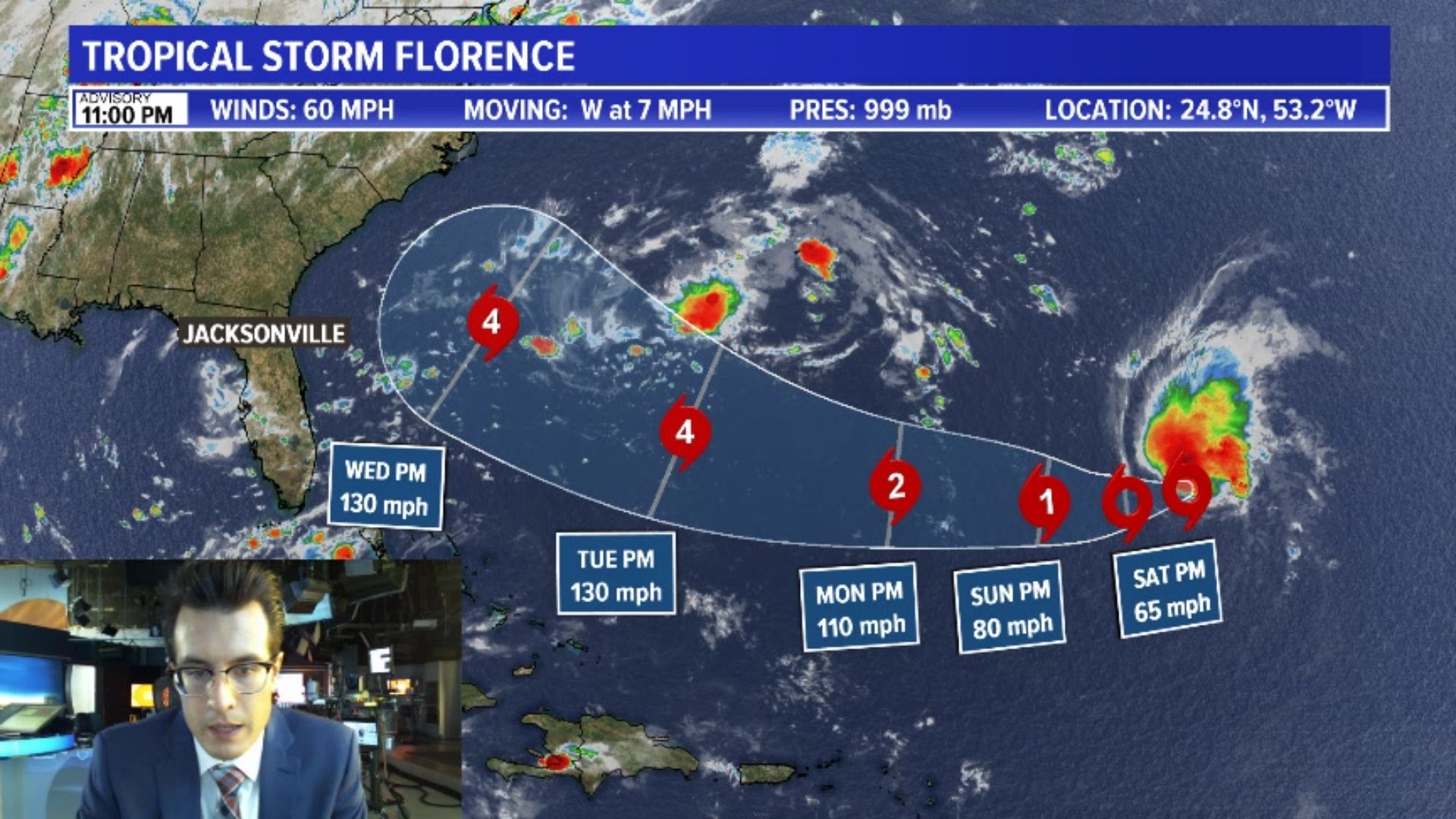