Hurricane Irma and its aftermath

The storm had passed when the worst began.

As Hurricane Irma pushed north, water – some 2.2 trillion gallons of rain, coupled with a 5-foot storm surge and strong south winds – came surging over the banks of the St. Johns River. It poured from the sky, boiled from manhole covers and literally swamped hundreds of acres of San Marco.

For the residents that fled -- and those that stayed behind -- the water delivered a shared dose of misery and indiscriminate ruin.

For a few days, silence replaced the hum of traffic and air conditioners. Then, for weeks into months, the scream of chainsaws and bandsaws and backhoes and dumpsters – Shop-Vacs and fans and insistent, incessant backup alarms.

On wet days – and there were many – streets re-flooded, rising to meet still-sodden sandbags. Yards, black with muck, were pitted with chunks of disintegrating drywall, piled with sofas, and lined with bag after black plastic bag of wet mess.

And, of course, the smell: Of rot, of sewage, of mold and death, and occasionally, the bright honeysuckle scent of Porta-Potty deodorizer.

Those who had to leave left.

Those who couldn't, remained.

Don Pepe, a resident of San Marco for nearly 30 years, is familiar with the routine street flooding his neighborhood sees at high tide. And he’s no Pollyanna about the twin realities of low-lying streets and rising seas.

Pepe lost his pickup truck and five motorcycles in the flood, along with his hot water heater, his washer/dryer, every appliance in his kitchen, and a few hundred photographs.

Pepe moved into the bedroom of his two-story house shortly after Irma’s floodwaters began shorting out his electrical outlets. He has spent the weeks since then living on protein shakes, trying to salvage what he can – pictures of his time as a pilot in Vietnam, his home’s hardwood floors -- and replace what he can’t.

Each purchase is made with an eye to the next flood: it must be washable, expendable, or high enough off the ground to avoid floodwaters. His new washing machine and dryer stand on a home-made platform 4 feet off the ground; the delivery men made him sign a waiver releasing them from liability.

Some things, however, cannot be replaced. Like his next-door neighbors. They are also his ex in-laws. But they were good friends, Pepe says, and their departure leaves a great void.

“They aren’t coming back and I don’t blame them,” he says. “Because this is going to happen again. The times have changed and we all know why.”

“We underestimated it. Badly.”

Jeff Mulrain, who waited out the storm from his second-floor Palm Avenue apartment, expected floodwaters to rise inches, not feet. He set his cell alarm at three-hour intervals, planning to keep watch and leave if things got bad. But between 3 and 6 a.m. on Sept. 11, while he slept, the water rose from ankle to chest high, making evacuation impossible.

“Two and half hours, and that’s all she wrote,” he says ruefully. “And once you’re staying, you’re stuck.”

It was Mulrain’s cellphone footage, posted to social media, that gave many of his evacuated neighbors their first glimpse of how bad things were. The videos mimic his disbelieving gaze, careening from people on rooftops (“Jesus Christ!” he can be heard swearing) to the flood-choked street beneath his balcony.

Eventually, FEMA came. The Red Cross dropped off bags of chips and cans of water. And residents trickled back, to stare disbelieving at the scale of destruction.

“Our neighborhood is in shambles,” says Mulrain. “I’ve never seen so many people crying.”

He’s optimistic San Marco will rebound eventually but says for long weeks, it was a sea of garbage bags “as far as you could see.”

“Cleanup is pretty much day by day,” he says. “It’s almost like running in the sand.”

“It was a very crushing thing.”

David Harris got exactly two weeks of married life with Shannon before Hurricane Irma forced them out and ruined their home.

Like many San Marco residents, they left not because they really believed they needed to, but just to be safe.

“We’ve got a friend up in Charlotte,” Shannon says. “We were going to make a mini vacay out of it.”

Before they left, Shannon tied up the hem of her wedding dress – just in case. She put her computer on a high shelf. Everything else, including their wedding gifts, and a new vacuum specially designed to pick up dog hair from their puppy, Preacher, was destroyed.

“The only time I got emotional was when I saw the vacuum,” Shannon says with a small laugh. “For some reason, that vacuum cleaner was like the symbol of the big thing we got when we got married, and it was so exciting were going to do this life together you know? And then seeing that was hard.”

For David, the stress of the disaster was compounded by what felt like a new level of responsibility.

For a couple just starting out, the timing could not have been worse. Then again, David says, it may have been lucky.

“I guess in a way it helps we’re still in the honeymooner phase,” he says. “It’s still new and exciting.”

Life on the move

Michele O’Malley couldn’t have managed without the gray Sterilite bins. In the weeks after the storm, the family of six moved five times – each time packing everything they still owned, or had been forced to buy -- into the bins, and into car. “It takes about two trips,” she says about the now-familiar drill.

They farmed out laundry to neighbors and elementary school teachers; they learned every “kids eat free” night within driving distance, and they couch surfed with friends.

It took three weeks for Michele to find an available FEMA-subsidized hotel room. “All the rooms were either booked or not participating anymore,” she says. “So it was hard – hard, and lots of hours to find a place to stay.”

Even then, the family had to pay extra to get a “suite” – a room with a pullout couch and large enough for all four kids. And there was no guarantee they’d be able to stay more than a week.

“Our FEMA lodging approval is only through Saturday,” Michelle said the Tuesday after moving in. “So we have to check out by Sunday, and we don’t know where were going next.” Calls to FEMA led only to long holds and eventual automatic disconnects. “Sorry, there’s no one available to take your call,” the recording says. “Your call will now be disconnected.’”

“I sometimes get a little down because I don’t know were going to live,” O’Malley says admittedly. “That’s a little scary for me for the kids. Right now, I just try to keep positive for them. And I’m very lucky nobody was hurt nobody was injured and we’re all still here. And that’s the most important thing.”

Like a lot of San Marco merchants, Jackie Grzebin didn’t have flood insurance. The 25 inches of water that swamped the Flame Broiler restaurant put her eight employees temporarily out of work, and cost her dearly.

Expenses come on top of lost revenue, which mounted each day the doors were shut. The location, would lose about four weeks of sales, but still had to make payroll for displaced employees. After just a year and a half in business, Jackie says. “Having to put this kind of additional money into it, it’s extremely difficult.”

But the flood was as emotional as it was economic, even for business owners.

“Mentally is beyond even something to discuss,” Jackie says. “It’s horrific. Every time I’ve talked about it before today, I’ve cried. I’m crying now.”

As she talks, a customer walks in, wrongly believing the restaurant has reopened.

“That’s my fourth customer today, and it’s almost worse,” Jackie says, after turning him away. “It’s nice that they’re still coming and hoping that we’re here, but it’s really disheartening.”

“Most of the time, not a whole lot happens.”

Jorge Argueta calls his family The Brady Bunch – a blended stew of six kids, ranging from 8 months to 12 years.

Were it not for the kids, Jorge says, he and his wife, Mandy, probably wouldn’t have evacuated their small blue house on Children’s Way. Jorge has lived most of his life in Jacksonville, he says, and he’s “not the type” to get excited about a hurricane. “Most of the time, not a whole lot happens.”

As it turned out, they wouldn’t be able to return to the house they left behind.

“Everything I picked up was soaking wet,” says Jorge, who reached his house the Tuesday after Irma by wading through floodwaters. “I called my wife told her what was going on. I just broke down, and told her everything was ruined.”

The family has since moved to Riverside, an apartment in which virtually every piece of furniture was donated. Jorge says the help of family and friends has been invaluable, but the stress still shows. Even the baby, when she went to her seven-month checkup in October, was showing signs.

“The doctor said it seemed she may have been under a little bit of stress, and she didn’t really gain the weight she was supposed to,” Jorge says. “They said it’s just like adults -- if you’re dealing with change and stuff like that, the baby’s got to adapt.”

"I think we got a problem.”

Michael Butler remembers his son-in-law waking him at about 3 the morning of the storm. “He said, ‘I think we got a problem.’”

Butler sat up, and put his feet down in ankle-high water.

For the next few hours, he and his wife Kathy huddled in their elevated kitchen and watched in shock as the water continued to rise.

“It was just pouring in,” Kathy says. “It was like a lake out there.”

“It was like a waterfall coming in the door,” Michael says.

By the time they decided they had to leave, they felt like refugees. They stumbled through waist-deep water for a block and a half – Michael still in T-shirt and boxers, Kathy cradling their ancient cat, Peanut.

Since then, the couple has been living with relatives, waiting for the inscrutable timelines of insurance and contractors to align. They’ve made some progress -- Michael returned to work, the couple replaced their ruined car. But they’ve suffered other setbacks – illness, insomnia, the death of Kathy’s sister.

And they still grieve over the loss of all their possessions, their years of photographs, Michael’s antiques collection.

“I’ve saved so many years, so many treasures of family things,” Michael says. “I’m very proud of my history, and all that’s gone. It’s all … gone.”

WATCH THE FULL DOCUMENTARY HERE OR WATCH INDIVIDUAL SEGMENTS BELOW: 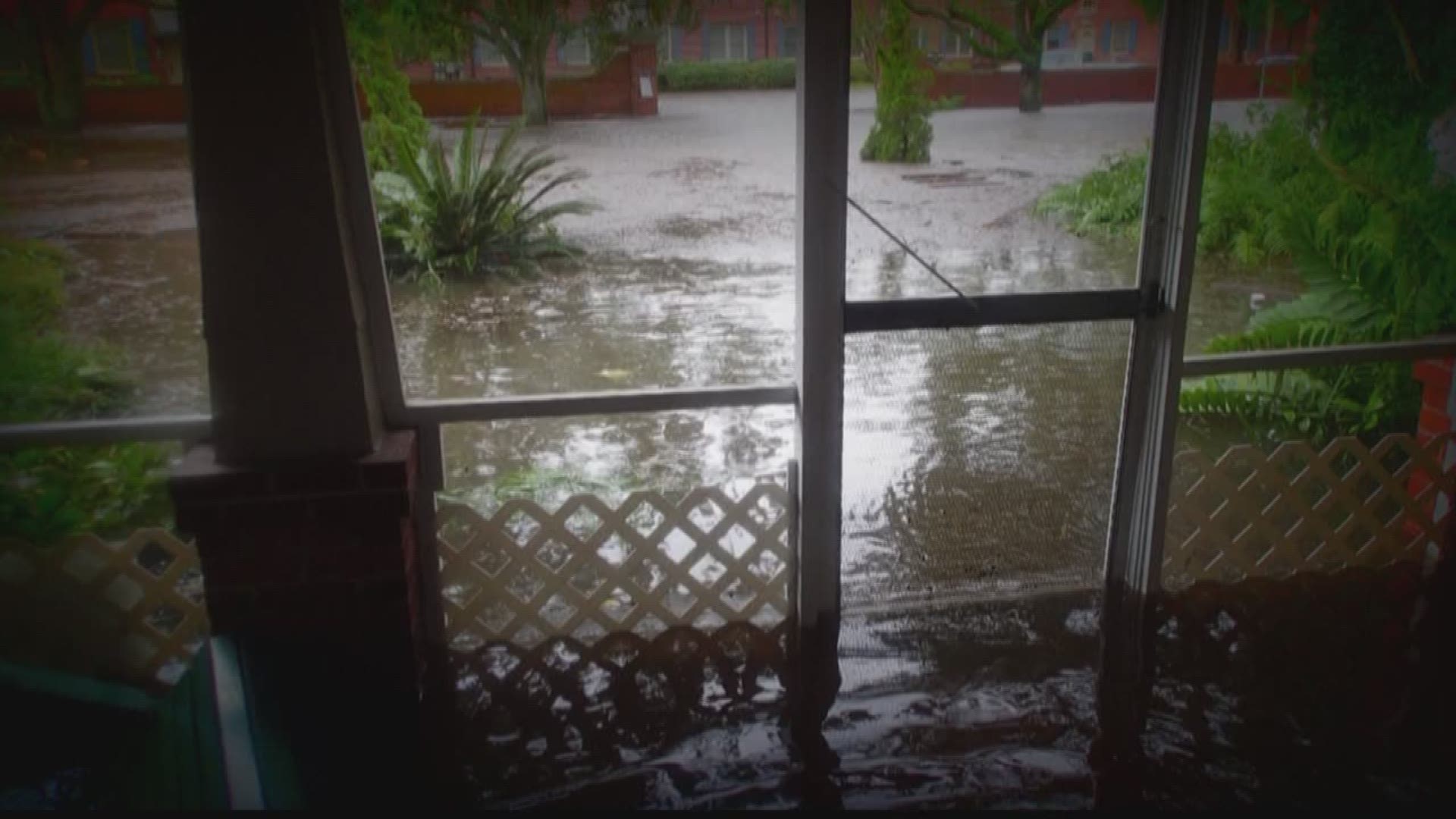 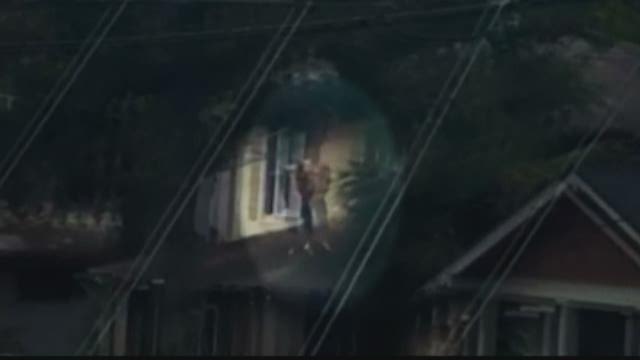 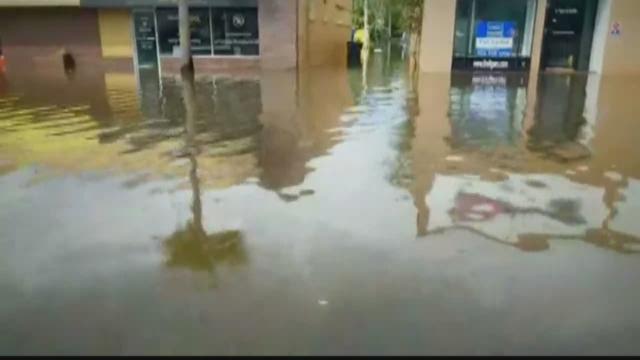 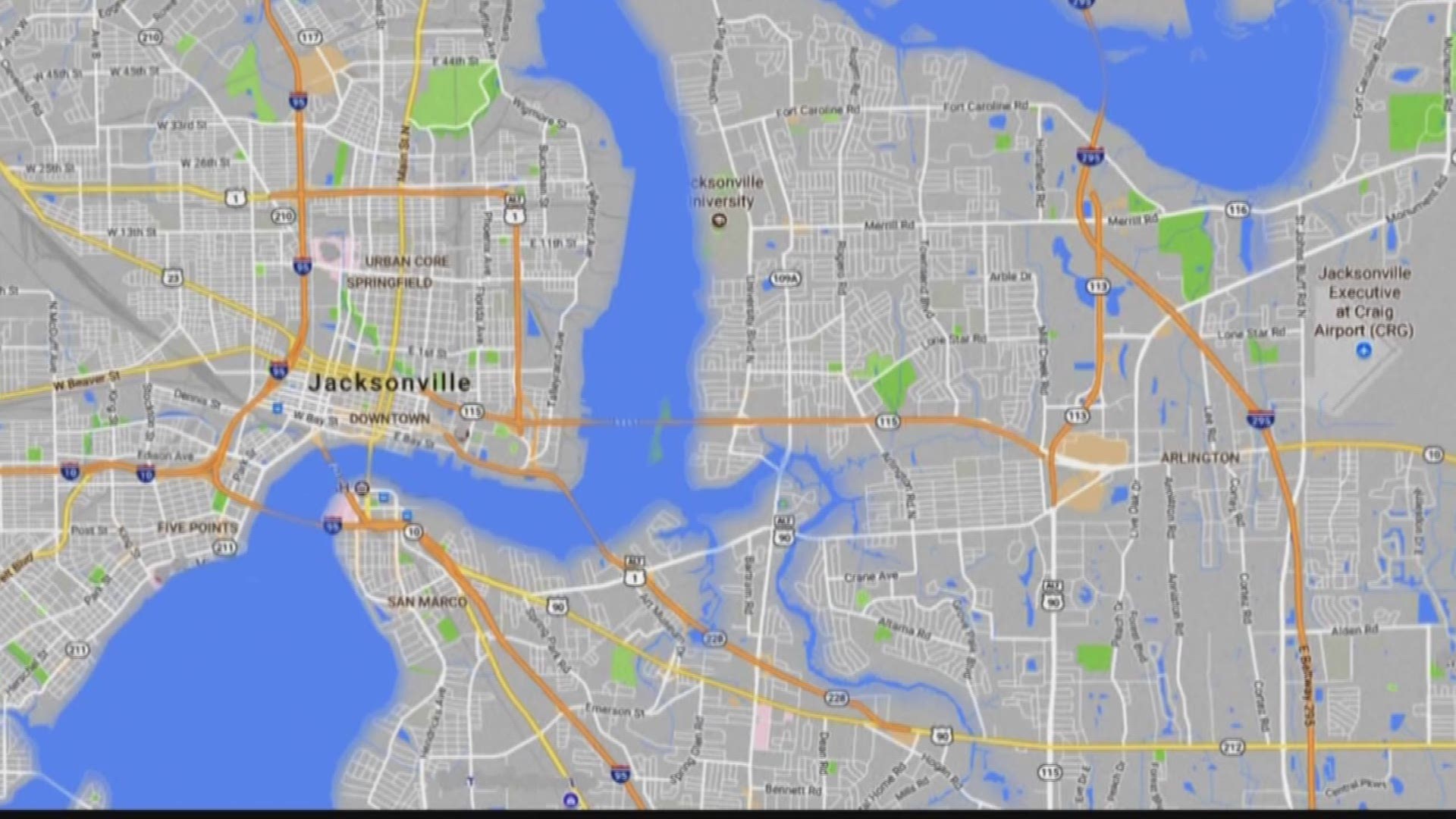 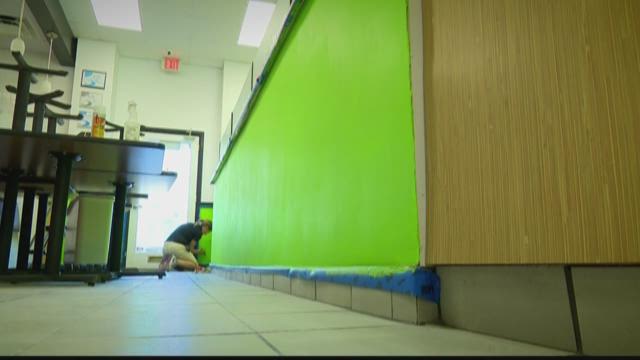 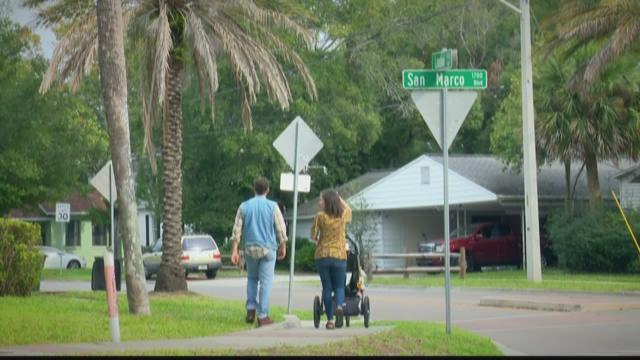 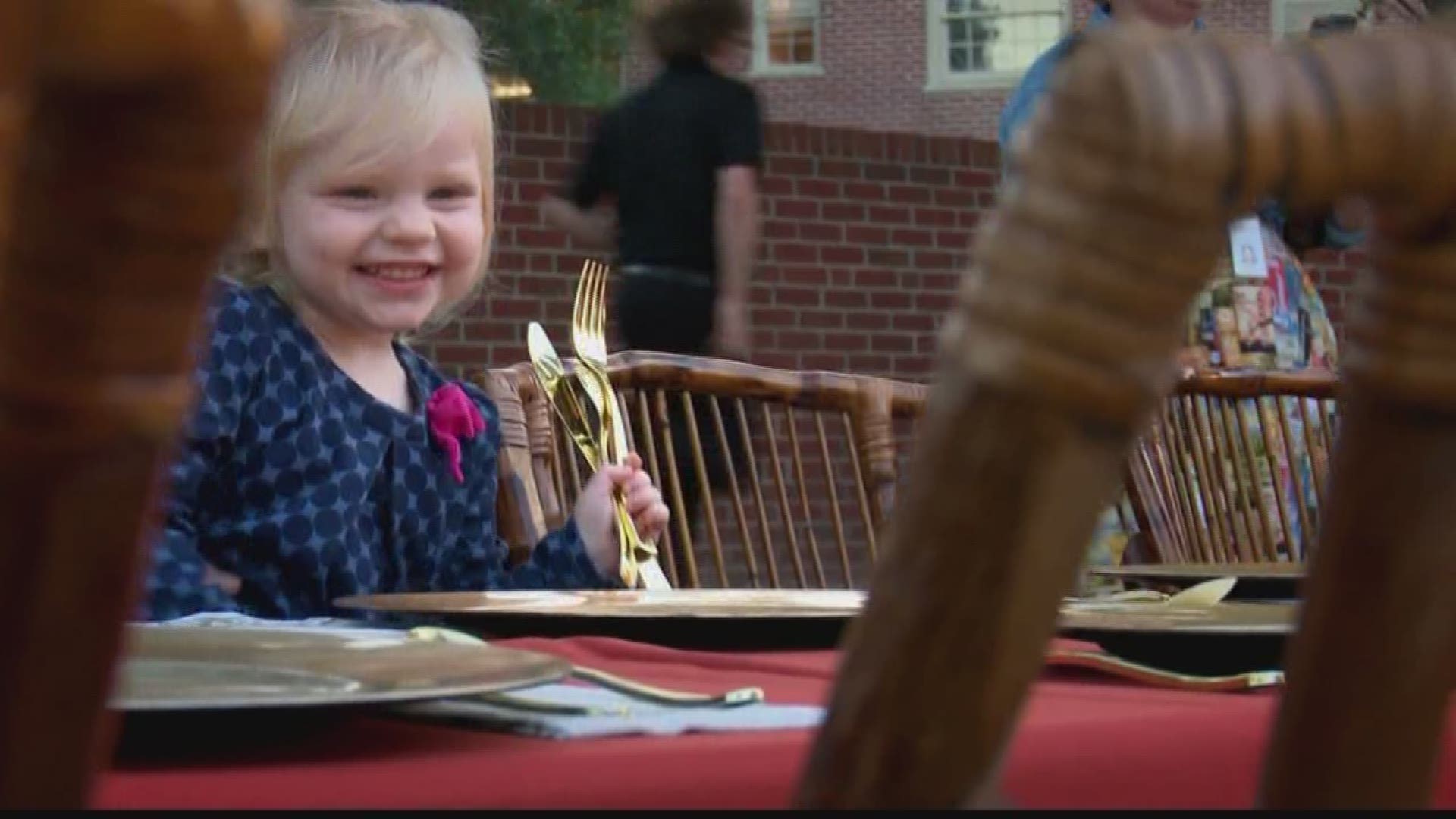 Mobile users can click the following links for the videos:

Why we did this: A note from our News Director