"It's important that Floridians don't focus on the cone," DeSantis said Tuesday. "Most of the rainfall is going to be east of the center of the storm." 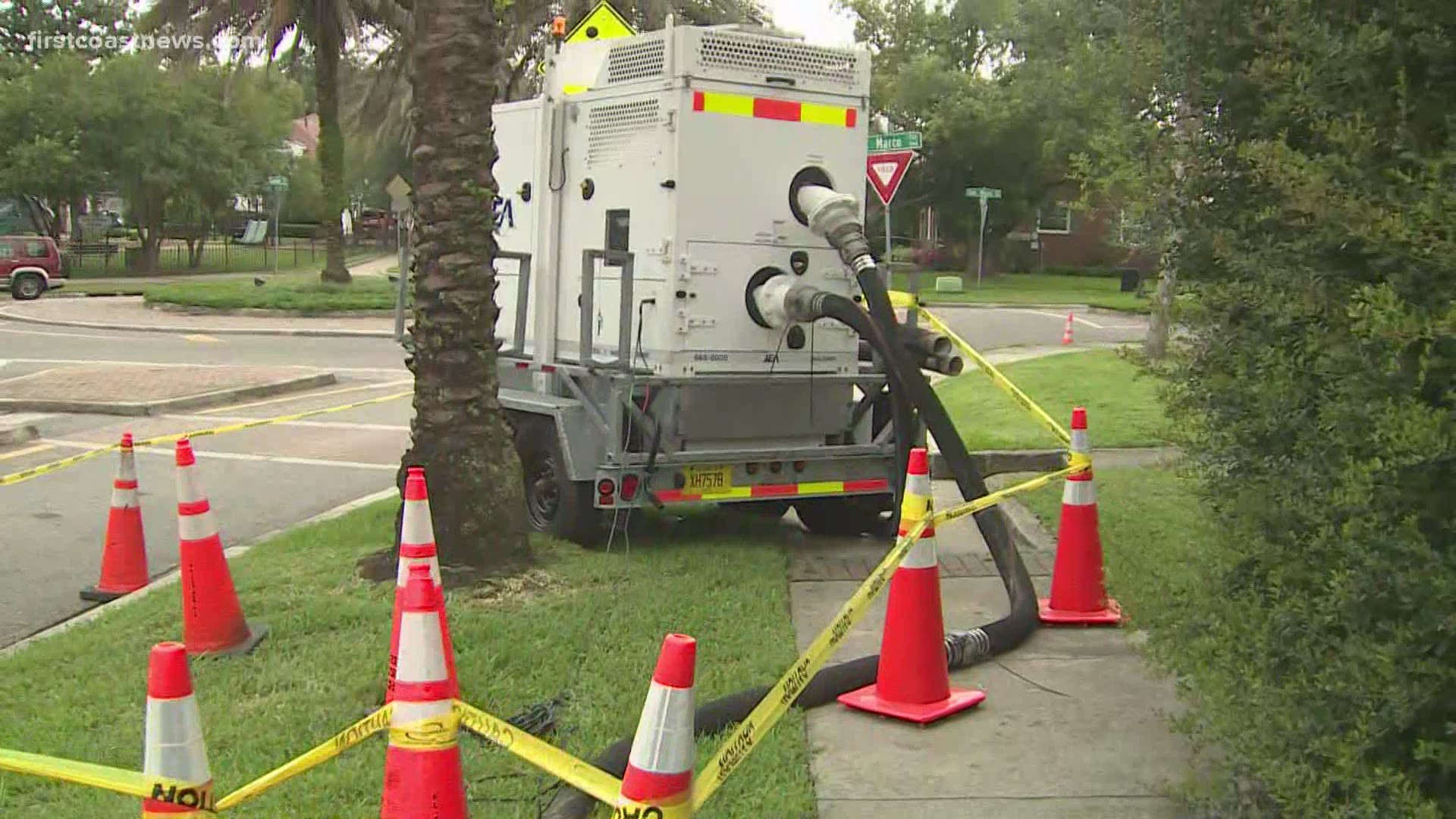 JACKSONVILLE, Fla. — State and local leaders are monitoring the impacts that Tropical Storm Elsa is expected to have on Florida, and they are sharing preparedness plans Tuesday.

Curry said the city's public works department has been working diligently in the past few days to prepare for this storm by cutting down branches and clearing hazard areas.

Curry also announced that all of the Duval County school's student-related summer programs are canceled for Wednesday and all city-owned pools will be closed. For a list of county-by-county closures and cancelations, click here.

"I want to encourage citizens to stay informed via the city website, Jaxready.com, our JaxReady mobile app or via local media outlets," said Curry. "Know your evacuation zones and routes so you are prepared if you need to act quickly."

JEA announced that the utility company is suspending the deactivation of utility services for nonpayment until Thursday, July 8. You can call 904-665-600 to report outages or visit the JEA website.

Atlantic Beach Mayor Ellen Glasser spoke on behalf of all beach mayors and urged residents to refrain from doing yard work today in anticipation of Elsa due to a large amount of debris that the city works department is already dealing with.

Sulzbacher will provide overnight shelters for anyone in need of shelter

Here are some important links to bookmark:

Florida Gov. Ron DeSantis held a news conference in Tallahassee regarding the tropical storm, speaking from the State Emergency Operations Center this morning.

Between 200 and 250 National Guardsmen are now on standby to assist with the storm as part of the state's response to Elsa. The majority of them are currently at a logistical staging center in Orlando, working to help push commodities out of a warehouse in preparation for the storm.

"It will track parallel to the West Coast of Florida today, with strong wind gusts and heavy rain, along with the potential for isolated tornadoes," DeSantis said. "It's important that Floridians don't focus on the cone. Impacts are expected well outside that area ... Most of the rainfall is going to be east of the center of the storm."

Right now, there are tropical storm warnings for 22 counties along Florida's West Coast, with a hurricane watch in effect for the Florida coast from Pinellas County to Dixie County, DeSantis said.

There is also a storm surge watch for 12 counties along the Gulf Coast, he said.

"So if you're in those coastal areas, begin those preparations now," DeSantis said. "Be prepared to be without power for a few days, having enough food and water for each person in your family, including for your pets."

It's important for Floridians to have weather alerts turned on, DeSantis said, especially because most of Elsa's impacts will begin overnight.

While widespread evacuations are not expected, the governor said people should heed warnings from local officials regarding evacuations and shelters opening if needed.

The governor reminded everyone to use caution when trimming trees or when using a generator. Exhaust must go to open air, and not inside your home or garage, or outside an open window.

"The last four years, there have been more fatalities as a result of people getting carbon monoxide poisoning than direct impacts from a storm," DeSantis said.

You can watch both of those news conferences live here.

RELATED: Flood Watch in effect for portions of the First Coast with Elsa's heavy rains expected on Wednesday