It seems like we've been watching the storm named Dorian for a really long time.

Consider that until the start of the satellite era, we didn't know what was "out there" unless direct observations were made by planes and ships. There was a short window in the 1950s where cameras mounted on rockets took pictures of the atmosphere - that is what sparked the satellite meteorology era.

Hurricane Esther in 1961 was the first hurricane to be discovered by satellite.  The TIROS III satellite  (TIROS: Television Infrared Observational Satellite) captured images of Esther, as well as Anna, Betsy, Carla and Debbie in 1961.  At the time, scientists at NASA were able to assist the hurricane center with supplements to the observations being done by planes.

"I remember in college using the LFM (Limited Fine Mesh) model and it kept killing Hurricane Alan back in the 80s," recalled WTLV/WJXX Chief Meteorologist Tim Deegan.  "But the models didn't have any sense of tropical weather."

Hurricane Alan went on to cause more than a billion dollars in damage in the Caribbean, eastern Mexico and southern Texas over its life from late July to early August 1980.

Deegan noted that later in the 80s the early form of the GFS (Global Forecast System) started to integrate the idea that warmer air aloft and lighter winds meant intensification of hurricanes.  Forecasts began to improve.

Since then, scores of meteorologists continue to develop, improve and fine tune forecast models specifically targeted to tropical meteorology.

Meteorologists utilize computers that process complex probability and statistics calculations to produce forecasts.  The forecast models (and there are many) take data in and numerically plot most likely scenarios based on time.  Every model is "built" with a bias, like having its own personality, on how it deals with various atmospheric conditions.

The problem is the forecasts can (and often do) conflict with each other.  That is where expertise and experience come into play.  Often times forecasters out-predict the models by using basic meteorological principals that forecast models can overlook.  Common sense is a human forecasters best tool.

The biggest challenge to ANY forecast is the fact that the atmosphere is a vast, dynamic fluid environment that is constantly changing.  From bottom to top the atmosphere averages 50,000 feet and forecasters have to consider that vertical extent of the atmosphere over thousands and thousands of square miles.

So, what about Dorian?

That which would eventually become Hurricane Dorian was first mentioned in National Hurricane Center outlooks (general comments of observations of the tropics) on August 23, 2019 at 8AM.

National Hurricane Center Tropical Outlook from August 23, 2019. The area of concern in yellow would eventually organize and grow into Hurricane Dorian.
NHC

Using satellite imagery, NHC meteorologists noted:
"Showers and thunderstorms have increased since yesterday in association with a tropical wave located about 1400 miles east-southeast of the Windward Islands.  Additional slow development of this system is possible during the next few days as it moves generally westward at about 15 mph. * Formation chance through 48 hours...low...10 percent. * Formation chance through 5 days...low...20 percent. "

Later that day, in the 2PM outlook, the NHC upped the cyclone formation chance to 40%-60%.  By 8PM it was at 60% or greater.  It was obvious that Dorian was going to form.  "Environmental conditions appear conducive for additional development," was noted in the outlooks.

Tropical Depression Five became official at 8AM on Saturday, August 24.  At that time the storm was still 950 miles east of the Windward Islands and forecasters noted it was showing signs of organizing.

Tropical cyclones start as clusters of thunderstorms near an area of low pressure.  The storms get their energy from warm ocean water.  When the atmospheric conditions are right the storms will begin to work together.  The better the organization, the stronger the system becomes.

Tropical depressions are somewhat organized systems that are producing maximum sustained winds of less than 39 miles per hour.

As the system gets better organized the sustained wind speeds increase.

Once maximum sustained wind speeds get to 39 miles per hour or greater the system is a tropical storm and given a name.  The names are used to help differentiate one from another.

If the storm continues to organize and strengthen, once the maximum sustained winds reach 74 miles per hour, the named storm becomes a hurricane.  As the storm intensifies and the wind speeds increase the storm climbs up the Saffir-Simpson Scale, a classification of hurricane intensity based on wind speed. 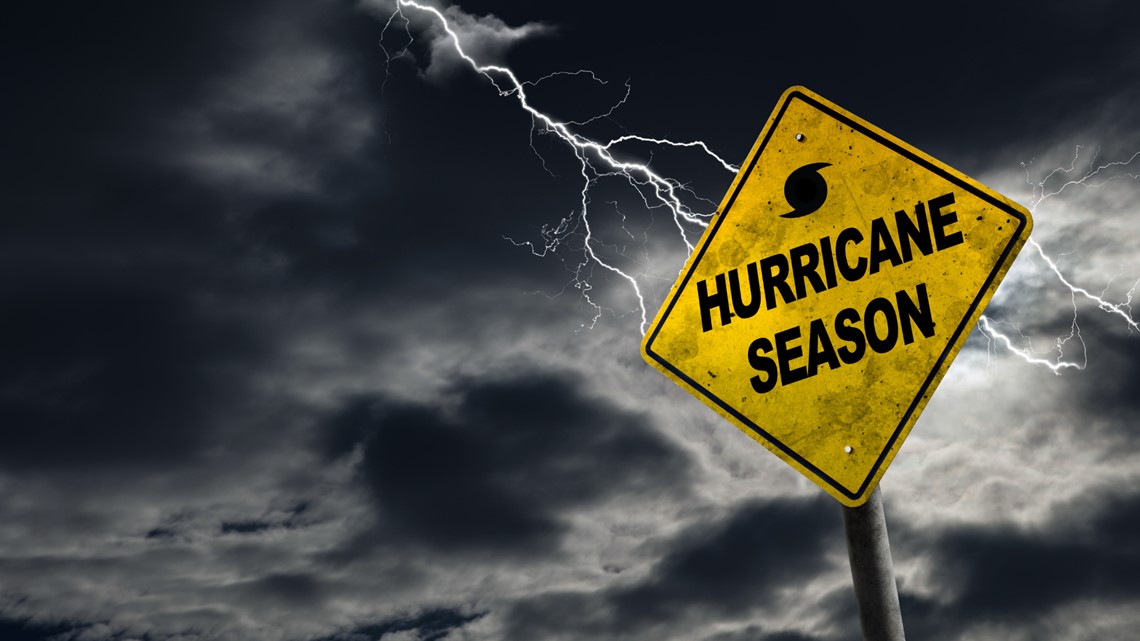 So, back to Dorian.

At 8PM on Saturday, August 24, 2019 Tropical Depression Five became Tropical Storm Dorian.  Maximum wind speeds were estimated to be 40 miles per hour.  In the forecast discussion from the NHC, meteorologists noted that the "inner-core of the small cyclone has noticeably improved since the previous advisory." Dorian was sitting in an area of shear (atmospheric winds that are unfavorable for development) but that shear was expected to lessen and they anticipated the storm would grow.

And grow it did.

The Air Force Reserve Unit Hurricane Hunters (specially equipped airplanes that fly into storms) started investigating the system.  They provide critical data as to what is going on inside the storm.  Incredible amounts of data  give forecasters real-time observations to feed into forecast models.  Often this data can change the accuracy of forecasts - for the better - significantly.

At 2PM on Wednesday, August 28, 2019 Dorian was upgraded to a hurricane.  Forecasters noted an inner core with an eye and the potential for "marked intensification" that would bring the storm to category 3 after 72 hours.  They also began to focus longer term forecasts toward Florida for the Labor Day holiday weekend.

The environment surrounding Dorian was favorable for intensification.  There was great concern for the Virgin Islands, Puerto Rico and surrounding Caribbean Islands.

Hurricane Dorian forecast from the NHC on August 28, 2019. Forecasters noted great concern for the US/British Virgin Islands and Puerto Rico. They also included Florida in their longer range forecasts.
NHC

After the storm cleared the islands, it moved into very favorable territory to grow stronger.  Very warm ocean water, little atmospheric shear and no land anywhere around ... the perfect set-up.

The track Dorian was expected to take was based on the Atlantic Ridge, a huge area of subsidence (sinking air) over the Atlantic Ocean that would not allow the hurricane to move north.  Instead, the storm would skirt the edges of the ridge and move northwest and then west-northwest.

As it became clear that Dorian would be a significant threat to the United States, the National Oceanic and Atmospheric Center and National Weather Service began to launch weather balloons into the atmosphere from all over the southeastern US every six hours.  This would give forecasters more data to feed into the computer model forecasts.

It proved to be the turning point in forecasting where Dorian would go.

After the extra weather balloon launches began, a curve showed up in the forecasts.  The Atlantic Ridge was going to break down and Dorian would have an opening to move northward.

The "Curve" showed up in forecasts on Friday, August 30
NHC

At the same time, forecasters were watching a sweeping change in the steering winds of the upper atmosphere known as a trough that would begin moving toward the southern US.

The problem was the retreat of the Atlantic Ridge and the arrival of the trough were going to be a couple days apart.  That meant the storm would stall.  Forecast models were more aggressive with Dorian moving, but meteorologists believed the storm would linger.

An intensifying storm and decreasing forward speed is the recipe for disaster.

Dorian strengthened into a category 5 hurricane with sustained winds of 185 miles per hour and estimated wind gusts of nearly 200 miles per hour.  At the same time, the storm slowed to a stop.

And it was right over the northern islands of The Bahamas. 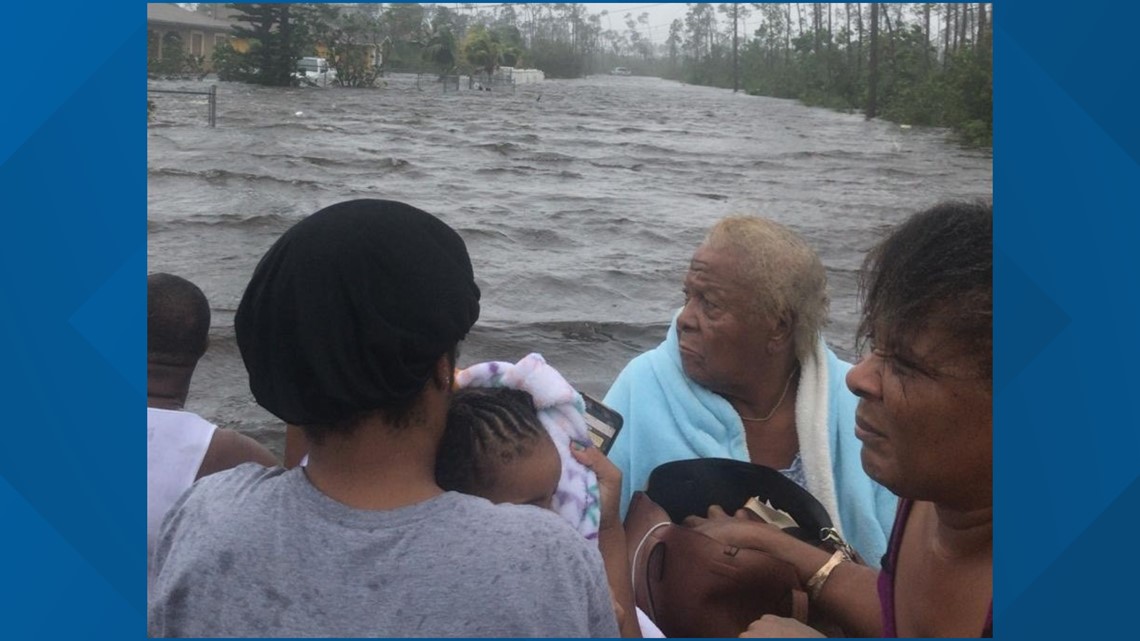 'No one is OK': Woman in Bahamas waits out Dorian as home becomes shelter
FREEPORT, The Bahamas - Aisha Roberts sent picture after picture from the Bahamas - and videos that show waves flowing between cars on Bahamian streets. But for each picture she takes, the one thing missing from them that she says is the most important - the people.

Catastrophe.  Dorian was the strongest hurricane to hit the Bahamas and sat over the northern islands with unbelievable fury for more than 30 hours.

All the while, forecasts continued to show the storm would be moving northwest.  But when?

Meteorologists showing "spaghetti plots" (the possible storm tracks from multiple weather models all shown at once) were showing good consensus on forecasts for near-term, but differed in longer ranges.  The spaghetti plots also only show the location of the eye - not the impacts.

Because the storm sat for so long churning the ocean water beneath it, the warm ocean water was stirred.  That brings colder water from the depths and cools the overall sea surface temperatures.

A dropsonde from one of the Hurricane Hunter missions found that Dorian had cooled the water beneath it by about 10 degrees.  That took away a huge source of the storm's energy.  So it began to weaken.

As Dorian weakened the damaging wind spread out.  As Deegan puts it, the power of the core of the storm was collapsing and the energy was spreading out.  Hurricane force winds, which were contained in the innermost 20 miles of the storm at its strongest point, now stretched out to 60 miles from the center.  Tropical storm force winds spread out to over 100 miles away.

Finally, later in the day on Tuesday, September 3 the storm began to move.  One mile per hour, two miles per hour, three miles per hour - Dorian was slowly but surely finding the weakness in the Atlantic Ridge.  Right on forecast.

Over the course of the day on Tuesday, September 3rd the weaker (but still vicious) hurricane started an expected parallel track off the east coast of Florida.  As the storm spread out tropical storm force winds worked up the coast, as did rain and storm surge.

As the data continues to stream in the forecasts are still being refined.  Hurricane Dorian is expected to continue its parallel track off the Florida coast before nudging just a bit to the west.  This puts the Carolinas in the cross-hairs for significant impacts from the storm.

Betsy Kling is the Chief Meteorologist for WKYC-TV in Cleveland, Ohio and assisted WTLV/WJXX meteorologists during the storm.  Both stations are owned by TEGNA Broadcasting.