The changing face of the Statue of Liberty

Over the years, the statue's copper-color shifted to green as the metal oxidized. 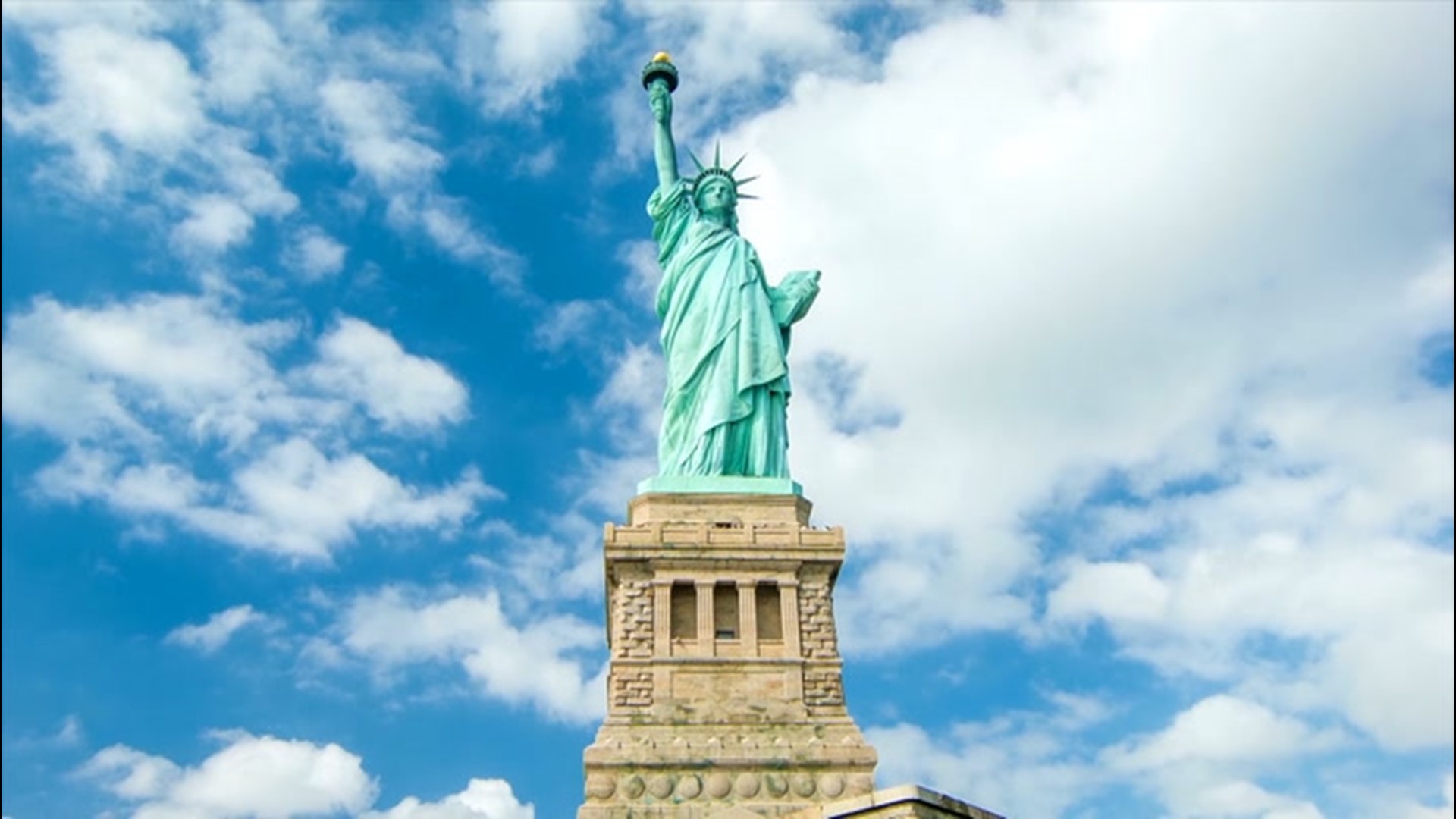 Since 1886, Lady Liberty has stood as a sentinel for liberty and justice for all, but both the copper exterior and the American interpretation of the colossus has transformed into how it is seen today.

When the statue was completed in 1886, the copper panels shined like a new penny. However, over the years, the copper-color shifted to green as the metal oxidized.

"When the air and moisture interact with the copper plating on the Statue of Liberty, a copper carbonate known as patina forms on the surface of the copper plating," AccuWeather Meteorologist Brett Rossio said. This mask of patina then protects the deeper copper layer underneath from weathering, he explained. Pennies undergo the same process.

"This is why statues are frequently made with copper or brass, due to its inherent durable nature when oxidation occurs," Rossio said. "This oxidation actually turned the Statue of Liberty the greenish/blue color that we see today. It was actually once brown in color when it was gifted to us in 1885 by the French."

Edward Berenson, a New York University history professor and author of the book The Statue of Liberty: A Transatlantic Story, spoke with AccuWeather Field Reporter Dexter Henry on how the statue came to be gifted to the U.S.

"Most people in our country know the American half and they don't know the French half," Berenson told AccuWeather.

In 1865, a year after the American Civil War came to a close, French political thinker, U.S. Constitution expert and abolitionist Edouard de Laboulaye proposed to gift the U.S. a monument to commemorate the perseverance of freedom and democracy.

At the same time, France was facing the authoritarian regime of Napoleon III, the nephew of Napoleon Bonaparte.

"They saw American liberty as a kind of antidote to their lack of liberty, and so, especially when the U.S. finally got rid of slavery, they thought, OK, this is the model France should follow," Berenson said. "And so you could direct attention to the United States by creating this colossus, unprecedented gift. And that would be a kind of a bleak way of saying to France's leaders that they have liberty and we don't."

The reception of the proposal in the U.S. was conflicting. There was unease as to what the French might want in return for the gift, according to Berenson. Not to mention that while France was covering the cost of the statue itself, Americans would have to scrape together the money for the pedestal.

The Statue of Liberty stood fully built on French soil for two years before being dismantled and shipped to New York where it sat unopened for months as Americans raised money to fund the pedestal.

"There's all these cartoons about the Statue of Liberty shivering in the water because there's no pedestal," Berenson said.

Eventually, New York City pulled together the money with help from an advertisement from Joseph Pulitzer, a famous publisher at the time and the namesake for the Pulitzer Prizes, which are awarded annually to honor excellence in American journalism to this day, and an art auction featuring Emma Lazarus' poem "The New Colossus," which is now engraved at the pedestal's base, with the famous line: "Give me your tired, your poor, your huddled masses yearning to breathe free."

And so began the process of rebuilding Lady Liberty.

Over the course of a year, workers endured complications from rebuilding the colossus in the windy harbor. Due to those winds threatening to swing any scaffolding and dent the softer metal, workers had to resort to more dangerous methods of scaling the statue.

The architects had accounted for the wind while designing the monument. The copper skin of the colossus is about two pennies thick, suspended by a series of springs that allow the monument to "absorb the wind." Berenson compared the principle of it to a suspension bridge. Had the statue been solid like others at the time, a hurricane could have toppled it over, Berenson added.

"This was built almost a century-and-a-half ago and the engineers were smart enough to figure out how to build a statue that would withstand the wind and the rain for more than a century," Berenson said.

While the designers of the statue had taken into consideration how the weather could impact the structural integrity, not all of the materials used were capable of withstanding the weather conditions in the harbor.

When the statue was renovated from 1982 to 1986, the rusted iron was replaced with steel to better withstand the environment. The torch, too damaged to repair, was also replaced.

The Achilles Heel of the statue, however, isn't at Lady Liberty's heel or even in the iron that eventually had to be replaced, but a more iconic part of the structure. Originally, Gustav Eiffel, for whom the Eiffel Tower was named, had planned the statue's torch-bearing, raised arm to be at a more stable angle. However, the sculptor, Frederic Bartholdi, decided that the original plan looked unnatural. He changed the arm to an angle that Berenson called "a design flaw in the Statue of Liberty right from the start."

"He deliberately weakened the structure so that the arm could be up there at what he thought was a better angle," Berenson said. The sculptor also had no idea that the copper statue would change into its iconic greenish-blue color some 20 years later, according to Berenson.

By the time the new colossus had been built, the original symbol of "a statement against slavery and racism," alluded to by the chain at Lady Liberty's feet, had been lost over controversies over reconstruction and "a more conservative turn in the United States," Berenson said. "You got away from the celebration of emancipation toward a more generic liberty."

But the symbolism of a generic liberty left behind a bitter taste for the African-American community, women and working people at the time of the project, according to Berenson.

"You have a lot of communities in this country, the black community, women and the working people who see the Statue of Liberty as, at best, a kind of ideal that the country needs to live up to, but isn't living up to," Berenson said.

On Oct. 28, 1886, the Statue of Liberty stood a sentinel for liberty and justice for all. But just three years earlier on Oct. 15, 1883, the U.S. Supreme Court declared the Civil Rights Act of 1875, which protected African Americans against racial discrimination, unconstitutional in the Civil Rights Cases. In its wake, the Jim Crow laws, which enforced racial segregation in the South, ensnared the nation for nearly a century until the 1950s.