On Sunday evening, the two brightest planets in the night sky will appear very close to each other in a nearly annual astronomical event known as a conjunction. 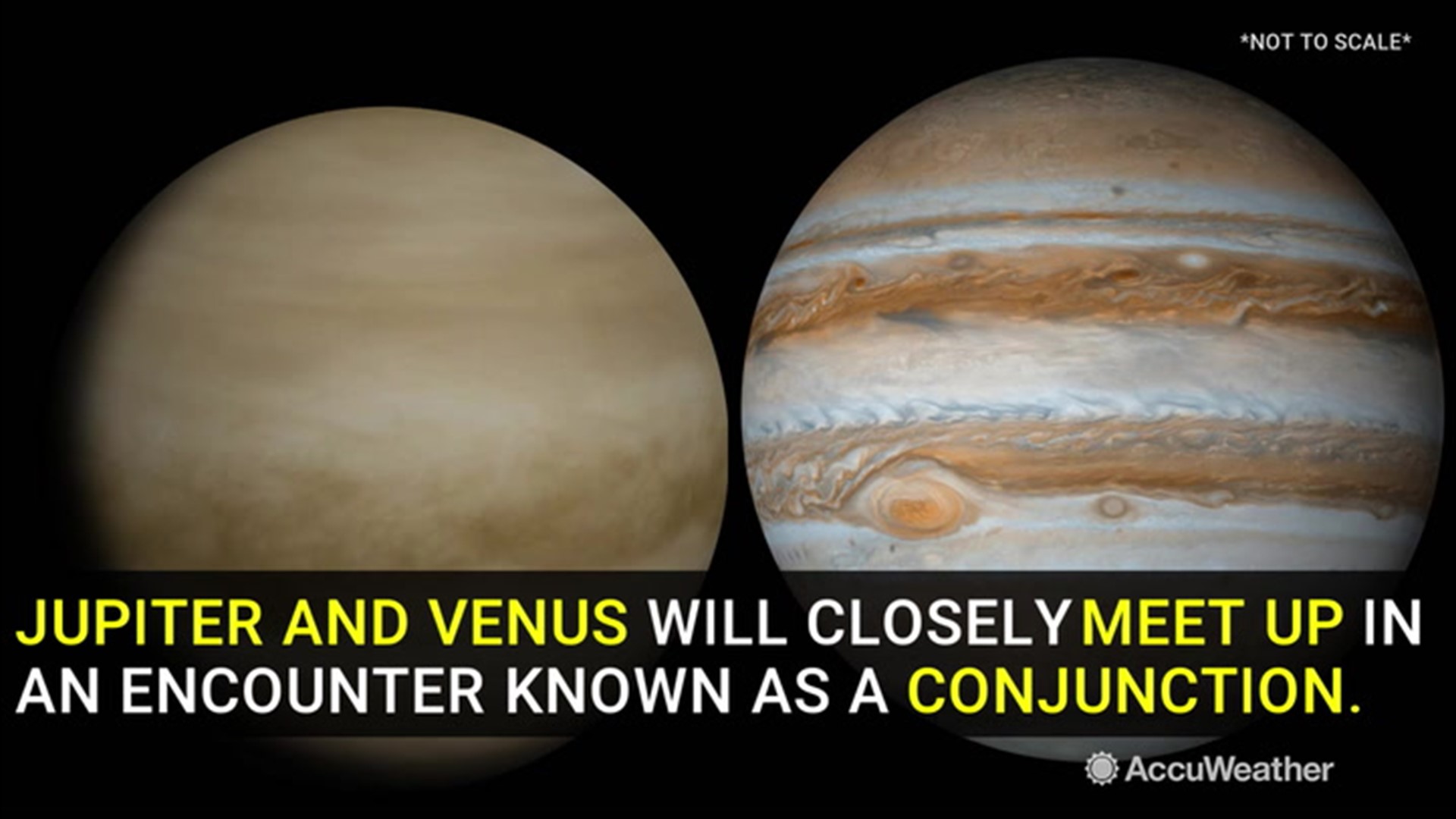 On Sunday evening, the two brightest planets in the night sky will appear very close to each other in a nearly annual astronomical event known as a conjunction.

People that step outside after sunset on Sunday and look to the Southwest will see Venus and Jupiter right next to each other. This event is easy to spot, making it a great one for younger stargazers to view -- and this year's conjunction will be a treat since it falls early enough on a school night.

The two planets will shine brightly side by side for about an hour and a half after sunset, which will occur around 4:30 p.m. along the East coast and around 4:45 p.m. along the West coast, before the planets follow the sun and dip below the horizon. No telescope is needed to see the two planets as they will outshine every star in the sky. They are so bright, in fact, that people in large cities where there is a high amount of light pollution will still be able to take them in.

For those hoping to break out a new telescope, the planets will serve as easy and interesting targets for people to familiarize themselves with their new equipment.

Additionally, focusing in on Jupiter with a telescope will reveal the planet's four largest moons: Europa, Ganymede, Io and Callisto. They will look like small specks of light in line near the bright planet. Some better telescopes may even allow onlookers to see some of the colorful cloud bands in Jupiter's atmosphere. Jupiter and its four largest moons as seen through a telescope. (Jan Sandberg)

Venus does not have any moons, but a telescope pointed at our celestial neighbor will help to reveal the planet's phase. Similar to the phases of the moon, Venus appears to go through phases from the Earth's perspective. The phases of Venus photographed between February and May of 2004. (VT-2004 programme/Statis Kalyvas)

Meanwhile, stargazers will be able to view other planets as they look for Sunday evening's spectacle. Saturn will be visible in the same area of the sky and can be found by peering above and to the left of Venus and Jupiter. Pluto, a dwarf planet, will be located near Saturn, but it is far too dim to see without a high-powered telescope.

People that miss out on Sunday evening's planetary conjunction will be able to spot Jupiter and Venus in the same part of the sky into the start of December; however, they will gradually grow farther apart.

Thanksgiving will be another good day to step outside after sunset and look to the Southwest as the thin crescent moon will meet up with Venus.

The following evening, on Friday, Nov. 29, the moon will move a bit higher in the sky and appear just below Saturn.

In early December, a different planetary alignment will occur. Venus will join Saturn in the night sky, and the two planets will appear nearly as close to each other on the evening of Wednesday, Dec. 11, as Venus and Jupiter will appear on Sunday, Nov. 24.