Climate Central's study shows Jacksonville's average temperature could be up to 6 degrees warmer than surrounding areas due to the urban heat island effect. 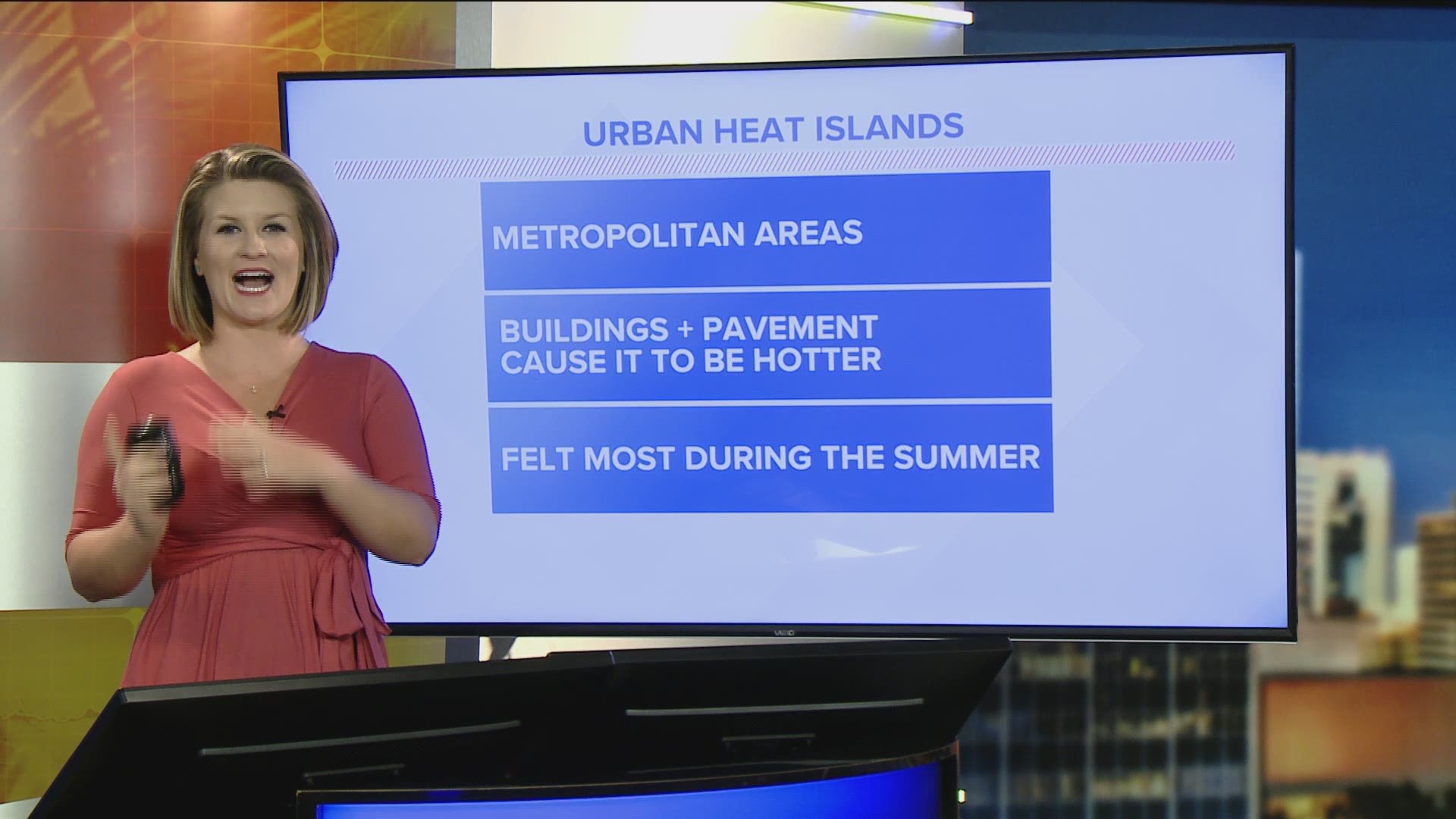 JACKSONVILLE, Fla. — Picture this - you're walking around town and feel the breeze, but it's rather steamy. A hot burst of air seems to be coming from... the pavement? the buildings? the sidewalk? You're not crazy. That's the urban heat island effect.

Urban heat islands are metropolitan areas, Jacksonville included, where buildings and pavement cause it to be hotter than their outlying areas. Impacts are felt most during the summer months.

The paved roads, parking lots, and buildings that make up a city absorb and retain heat during the day. That heat is radiated back into the surrounding air making it hotter than it would be in places like a park or rural part of town.

Neighborhoods in highly-developed areas can even experience mid-afternoon temperatures that are up to 15 to 20 degrees hotter than somewhere outside of the city with more vegetation and less development.

Climate Central recently created an index to evaluate the intensity of urban heat islands across the United States. Researchers measured the type of land cover in each city and population density.

Their study suggests Jacksonville's urban heat island effect may impact the city's average temperature by about 6 degrees - not only calling for warmer afternoon highs, but also warmer overnight lows.

"The index score for each city is a temperature representing the potential difference in average temperature for the city compared to its less developed surroundings," a Climate Central press release reads.

"Our results show the index temperature scores range from less than 5°F to nearly 9°F. Each score represents an average for the entire city, and certain neighborhoods or areas of a city will likely be cooler or hotter, depending on vegetation and other factors. So for example, our index shows that Baltimore may be up to 7°F warmer on average, although within the city, residents living next to a park will be cooler than residents living next to a parking lot or highway."

"The cities with the five highest scores are New Orleans, Newark, N.J., New York City, Houston, and San Francisco. Cities in the Midwest and Northeast, such as New York, Newark, Boston, Chicago, Providence, Detroit and Cleveland have more compact, historically built-out environments, with taller buildings. These factors add to the intensity of their urban heat island footprint. Cities like Houston and Fresno, Calif., scored higher due to the large percentage of impermeable surfaces that make up their city’s topography."

Urban heat islands are strongly influenced by factors like albedo, or the reflectivity of a surface and the amount of impermeable surfaces, like buildings, driveways, sidewalks, roads, and parking lots. Hard, dry surfaces provide less shade than a natural landscape with trees and greenery would. Heat is also created by human activities like running engines and air conditioners.

Climate Central researchers have some solutions, too. Some are more practical while others are more long-term solutions that would require more planning: