All other prototypes went up in fiery explosions. 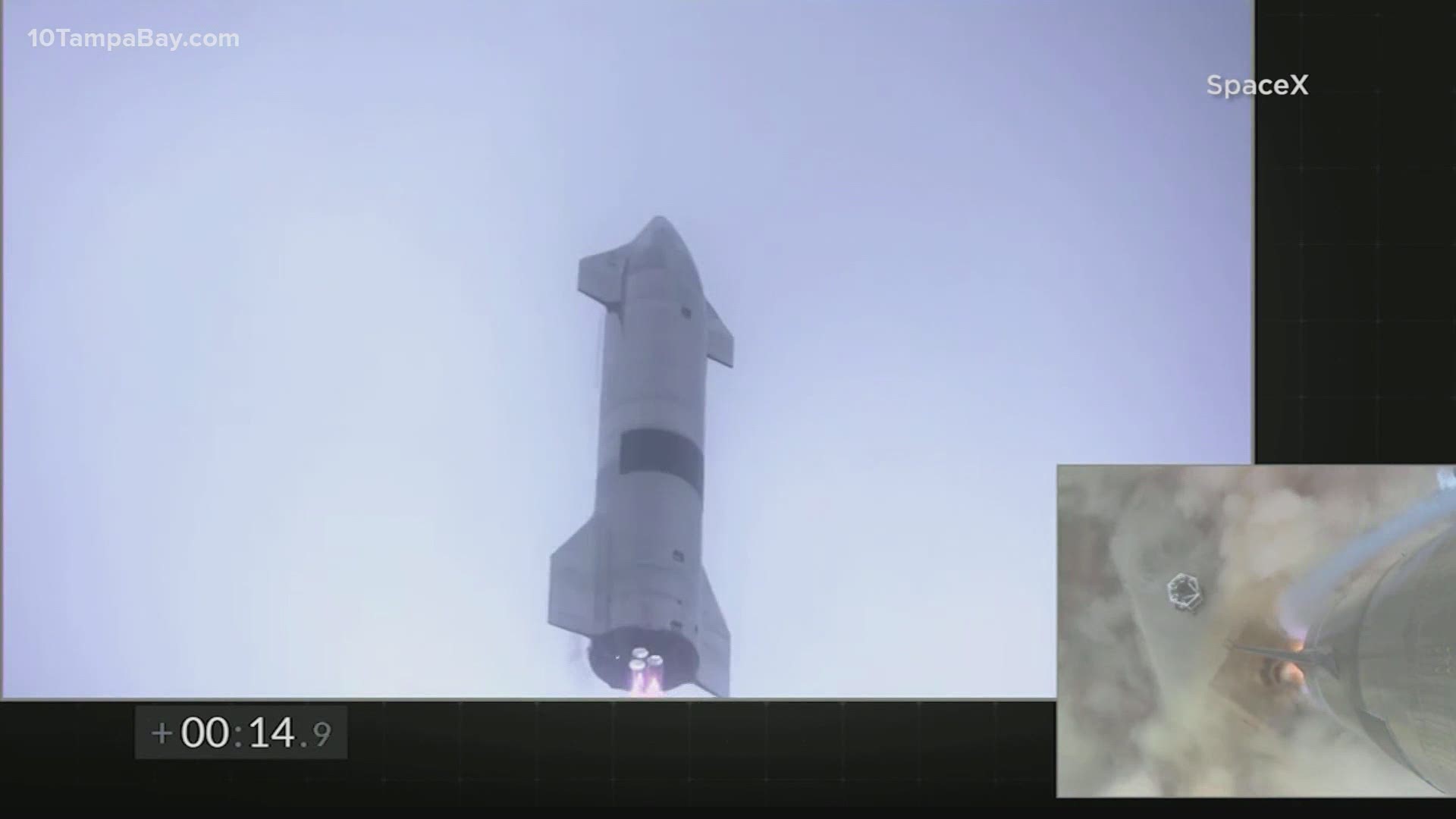 CAMERON COUNTY, Texas — UPDATE 5: And SN15 sticks the landing! Wednesday marked the first time a SpaceX Starship flight test did not end in a fiery explosion.

The prototype spacecraft that looks to fly future Mars missions received the final "GO" with about one minute left in the count.

About seven seconds before liftoff SN15's Raptor engines roared to life and began the climb to its 6-mile altitude where it hovered before bellyflopping and making its descent.

As the prototype reached the landing pad flames could be seen at the base of SN15. SpaceX confirmed during its live feed that a small fire had broken out during landing.

Water cannons were deployed and after several minutes flames were no longer seen near Starship.

It's been a busy week for SpaceX with two Starlink satellite launches, a nighttime crewed capsule splashdown and the launch of Crew-2.

You can re-watch the successful landing of Starship below:

UPDATE 4: Another day, another hop attempt. Things are looking good for a Wednesday flight test for SpaceX's latest Starship prototype.

The launch window for SN15 in Boca Chica, Texas is open until 9 p.m. ET.

SpaceX is aiming for its first non-explosive landing of the model after SN8 to SN11 have met that exact unfortunate fate since December 2020 when each ended in some variation of a fiery explosion.

UPDATE 3: It's another scrub for SpaceX Tuesday. NASASpaceflight member and Boca Chica resident Mary, who lives in the flight test evacuation zone, has reported it's a no-go for SN15.

Officials in Cameron County have also lifted the area closures put in place for safety ahead of launch attempts.

The reason behind the halting of Tuesday's hop is not yet known.

UPDATE 2: It appears Tuesday could be the day that SpaceX once again attempts the flight test of its SN15 Starship prototype.

All eyes are on the launch base in Boca Chica as the company looks to complete the first non-explosive landing of the model.

Only time will tell though, as the window for today's potential hop spans nearly the entire day.

UPDATE 1: Friday's test has been scrubbed. The Cameron County government website shows the closures put in place for safety ahead of launch have been canceled.

An immediate cause behind the halting of SpaceX's latest flight test is not yet known.

The saying is 5th time's a charm, right? Well, it is for SpaceX as the company is still chasing down the first non-explosive landing of its Starship prototype.

And we might be able to see SN15 complete that feat as early as this week, according to SpaceX founder and CEO Elon Musk.

He tweeted Monday saying the latest prototype completed its static fire test and was "preparing for flight later this week." An official date and launch window have yet to be released, which is normal for Starship hop attempts.

When SN15 does finally fire its engines, it will mark the company's fifth test of the prototype that hopes to eventually complete Mars missions. A variation of the model being tested in Boca Chica will also be responsible for landing U.S. astronauts back on the Moon.

SpaceX was awarded a contract by NASA on April 16 to design and develop a human landing system for its Artemis program.

But first, they have to stop exploding. This is the unfortunate fate that SN8 to SN11 have met since December 2020 when each ended in some variation of a fiery explosion.

Like prototypes in the past, SN15 will attempt to lift off the pad, hover above the ground for several minutes and then cut off its Raptor engines for descent. The goal is then to reignite its engines and reorient itself to attempt a vertical landing.