First Coast News went out on Rick Wilder's canoe to learn more about how he believes the litter problem can be remedied. 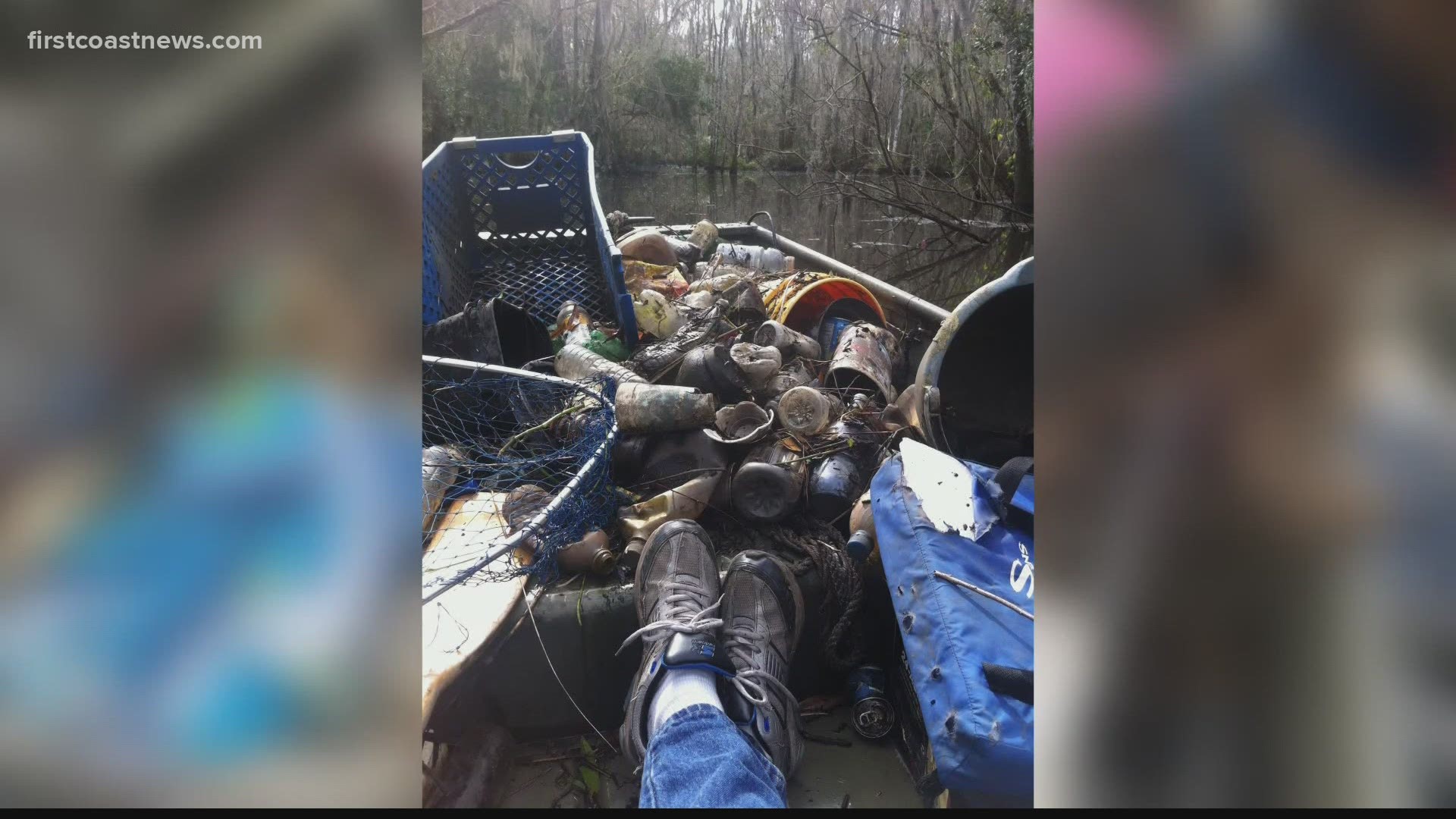 JACKSONVILLE, Fla — Thursday marks one week since the clean-up from Tropical Storm Elsa began. While much of the damage has been easy to spot and worked on, other impacts are easier to miss.

This includes litter becoming more visible than ever, but it's not just after a tropical storm that one Jacksonville man takes matters into his own hands to clean things up.

After any storm you can expect to see Rick Wilder and his Yorkie, Lance, out on Little Pottsburg Creek behind his home. First Coast News first learned about Wilder last week and got the chance to go out on his canoe with him and Lance.

"This is where I picked up all the stuff the other day, a whole boat load," Wilder said.

"How far would you say this is?" asked reporter Renata Di Gregorio.

"From where we put in? Not even a quarter mile," Wilder said.

After a storm like Elsa, the amount of litter in the creek is especially bad, but Wilder fills up trash bags multiple times a month.

RELATED: Avondale apartments without power one week after Elsa

"All this garbage comes from the storm sewers," he said. "If they put some kind of collection devices on it this would end. My job would be over."

The city of Jacksonville's Right of Way and Stormwater Maintenance Division oversees stormwater drainage including ditches, ponds, curbs, gutters and inlets, according to the city's website. The public affairs department says the city does not have nets or screens to capture trash.

Here's the response from the city to First Coast News' question about if the city has considered or is considering any type of technology to capture trash at storm drains or in stormwater systems or if something like this already exists:

"We do not have this type of technology for inlets within our drainage system. The challenge is the need to balance some type of trash filtration/collection system without restricting flow capacity of our system."

Jacksonville has a zero-tolerance litter policy. The first offense is a $50 fine, the second offense is $300, and the third offense and every time after is a $500 fine.

Wilder says he runs into kayakers who see what he's doing and start doing it too. Most of all, he enjoys being out on Florida's waterways.

"It's complete relaxation at its finest," he said. "Yeah I'm picking up garbage, but look at what I leave behind, a really pristine place that people come out and kayak in all the time. They don't realize how bad it's been over the years."

Read how litter can impact the environment on the EPA's website here.

Learn about what trash capture technology exists on the EPA's website here and learn about Jacksonville's stormwater drainage system here.

These are a few pictures from times Rick Wilder has picked up trash out of Little Pottsburg Creek. I went with him Wed.

We're waiting to hear from @CityofJax if the city has considered/is considering nets or screens in the stormwater drainage system to capture trash. @FCN2go pic.twitter.com/RtkvSdE4wC

RELATED: No tropical development expected for the next 5 days