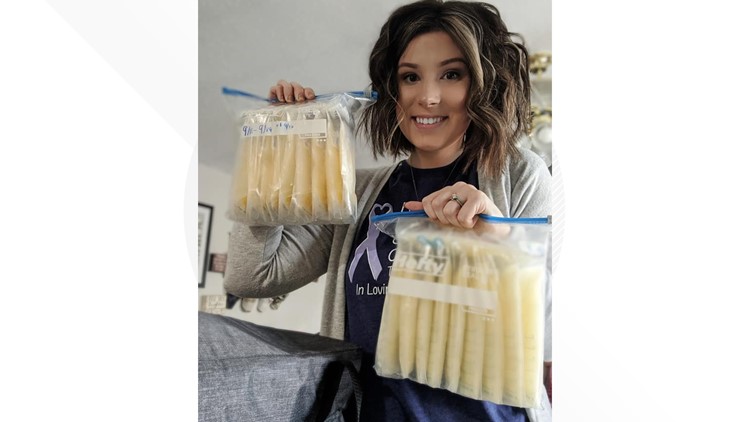 NEILLSVILLE, Wis. — Heartbroken after the death of her baby boy, Sierra Strangfeld had a dilemma: What should she do with her breast milk?

Pumping it was painful, mentally and physically. But it was coming in whether she like it or not and she didn't want it to go to waste.

Just over nine weeks earlier, Sierra and her husband Lee were hopeful they'd deliver their son Samuel into the world. But they knew it might not be easy.

The Strangfelds first learned their baby might have some health complications at 23 weeks. An ultrasound showed he was small, had clenched fists, clubbed feet and heart issues, all signs of a rare condition called Trisomy 18 or Edwards Syndrome.

Babies with Trisomy 18 have an extra chromosome 18 that disrupts normal development in ways that can be life threatening, according to the Trisomy 18 Foundation.

Only about 50 percent of babies with the condition are born alive and just 10 percent will make it their first birthdays, according to the foundation.

Doctors were hopeful Samuel would make it to birth, but then things tragically took a turn for the worst.

RELATED: Teen donates more than 600 Barbies with prosthetics like hers to hospital

At 30 weeks, Sierra and Lee learned her son would likely die in utero within the next few weeks. The two decided that day to have an immediate C-Section to "bring him into the world alive."

After doctors performed the procedure, the family got a few precious moments to hold Samuel and take photos with him before he passed away.

As she was mourning her son, Sierra contemplated what to do with the milk meant for her baby.

"I couldn't control his life or death, but I could control what I did afterwards. And maybe, that would mean saving another baby's life," she said in a message to HeartThreads.

RELATED: 'It's cool to be a good dad' | Watch these dads adorably crash their daughters' ballet class

In an incredible act of compassion, she pumped her milk for 63 days, donating it to a NICU milk bank on Samuel's due date.

Women can donate breast milk to other babies as long as they pass a blood test and are approved by a milk bank organization, according to the Mothers Milk Bank, a milk collection organization based in Austin, Texas.

Babies with health issues might need to use donor milk if their mothers aren't able to produce it themselves.

"There were times I was angry because why did my milk have to come in when I had no baby to feed? Why was I waking up in the middle of the night for this? The other part of me felt it was the only thing connecting me to Samuel here on Earthside. I sure hope he's proud of me!" Sierra wrote in a Facebook post that's been shared over 5,000 times.