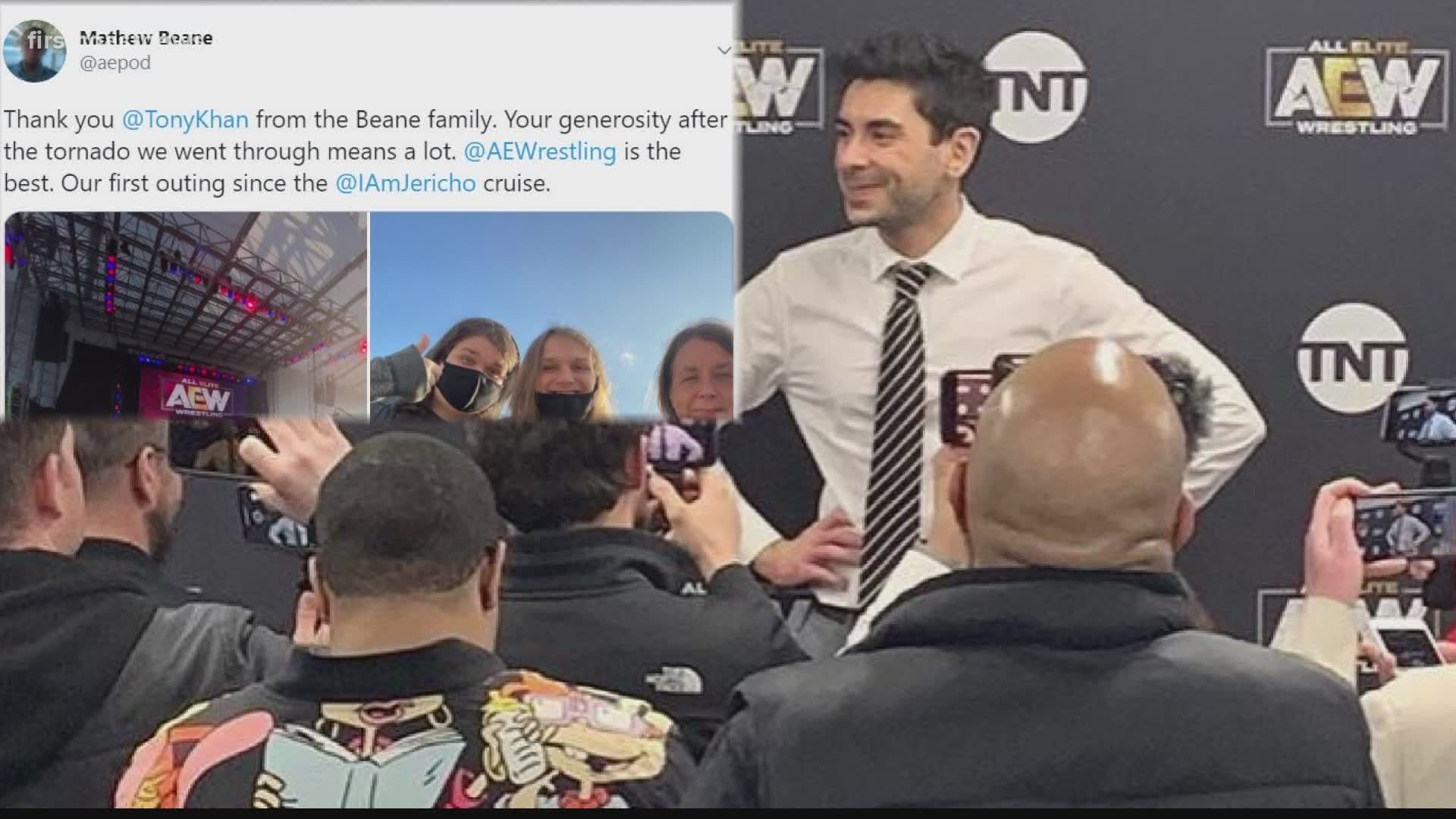 Matthew Beane's neighbors couldn't believe it. Who were these people helping clean debris around their homes?

“They kept asking me if it was a church group or something like that. They didn’t really understand," Beane recalled earlier this week. "Like ‘wrestling? You guys wrestle together?’ Like 'no! We’re just fans of wrestling.'”

Those "people" were Beane's friends from NXT United, a social group centered around a love of professional wrestling. Its members hail from Jacksonville to Boca Raton to Tampa to DeLand, where the Beane's live. Prior to the global pandemic, the group would attend live wrestling shows together throughout Florida, helping each other score tickets, go to group dinners, and host watch parties.

In reality, in its two years of existence, NXT United has become more than just a "group of fans."

"[When it happened] we really didn’t have any family to call," Matthew's son, Owen explained. The Beane's are originally from Minneapolis, Minnesota, and moved to Florida in 2015.

"But I guess we were wrong because we did have them.”

"It" was a five-mile wide, EF2 tornado that rolled through the Beane's DeLand neighborhood on August 18 with no real warning. Both Matthew and Owen were outside when the tornado hit.

"For me, it was like an action movie to actually watch the trees fall down like dominoes. Everything was flying past," Matthew described.

They emerged moments later to debris everywhere. Nearly every tree was down; one landed on top their neighbor's roof. The Beane's roof was slightly raised. The damage was significant, but thankfully for the Beane's, their house was still livable. Matthew estimates almost a third of the houses in their neighborhood are not.

The clean-up began immediately. Matthew also began posting photos on his social media pages, which caught the eyes of some of the family's friends from NXT United. The group, which is also active in fundraisers and other community service work like Toys for Tots, began talking sans the Beane's about ways they could help.

"Matt didn't ask for help, [but] if something happened to us – like when I got laid off or we’ve had people with health issues – Matt and his family would be there for us," explained fellow member Kyle Niblett.

"The group has always been there for each other.”

So, 72 hours after the tornado hit, there was NXT United: braving the treacherous tree branches, 95+ degree heat, and, of course, the omnipresent threat of the coronavirus to help clean-up the DeLand neighborhood.

It turned out they weren't the only ones looking to help.

Tony Khan, CEO and co-founder of AEW Wrestling -- also a fan favorite of the Beane family and NXT United members -- had seen a story done by MyNews13 in Orlando about the clean-up. He and the AEW ownership group wanted to gift the Beane family and their NXT United friends free tickets to that Wednesday's AEW Dynamite show at Daily's Place in Jacksonville.

For the Beane's, it was their first show since the pandemic began in March. As Niblett described, the Beane family was put in "the best seats possible," and the AEW staff couldn't have been more attentive.

Thank you @TonyKhan from the Beane family. Your generosity after the tornado we went through means a lot. @AEWrestling is the best. Our first outing since the @IAmJericho cruise. pic.twitter.com/ZkSSYNA6bf

“Tony Khan wasn’t related to the clean-up in any way. He just saw that NXT fans – wrestling fans – helped each other and he wanted to be a part of that," Owen Beane said.

It was also the first time, outside of the clean-up that the NXT United group was able to attend a show together, in-person, as a group.

"To have 22 people that I consider my family to all be in the same section, the same building, watching the one thing that we all have in common; the one thing that we're so passionate about and love... there are no words," Niblett reflected. "It rattled your soul in the most beautiful way possible."

Because this is more than a wrestling fan group.