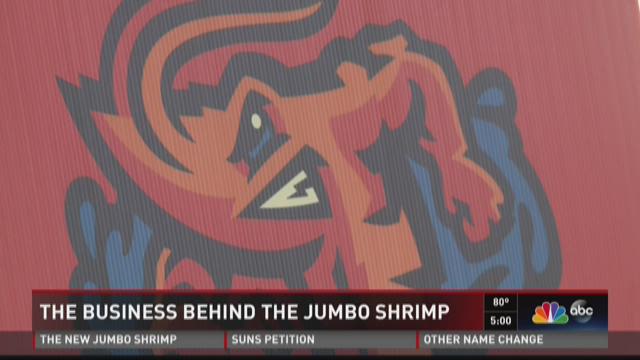 The long-standing tradition of the Suns’ minor-league baseball team in Jacksonville, which dates to 1962, will undergo a major transformation next season when the franchise changes its name to the Jacksonville Jumbo Shrimp.

Owner Ken Babby, who purchased the Florida Marlins Double-A affiliate from Peter Bragan Jr. two years ago (allowing Bragan to stay as owner in 2015), will unveil the name change and new logo Wednesday in a 10 a.m. news conference at the Times-Union Center.

“This is a high-energy, impactful, bold move,” Babby said Tuesday. “There’s certainly risk that goes along with it. There’ll be feedback and, I’m sure, some resistance. We’ve been holding on to this for a while and look forward to sharing it with the community. The tradition of the Jacksonville Suns is entrenched in Northeast Florida. It’s been known and loved. The passion for minor-league baseball in Jacksonville doesn’t change [with a new team name]. It’s just a new chapter in its evolution.”

The Jumbo Shrimp logo will have a large “J” running through it, with the colors being St. John’s Navy and patriotic blue, accented with American red.

Babby, who has repeatedly emphasized “affordable, family fun” in promoting both his Jacksonville and Akron Double-A franchise in Ohio, believes Jumbo Shrimp meets his criteria of wanting a creative name that has a direct tie-in to the local community.

“There’s something fun and quirky about minor-league team names,” said Babby. “In our league alone, you have the [Pensacola] Wahoos and [Montgomery] Biscuits. When people see this logo and hear the name for the first time, they’ll see this experience is all about fun.”

Changing the name of Suns to Jumbo Shrimp follows the Babby blueprint of what he did with his Akron franchise. After he purchased the Akron Aeros in late 2012, he changed the name to RubberDucks for the 2014 season, a move that coincided with a 27 percent jump in attendance over a three-year period. The RubberDucks won the 2016 Eastern League championship.

The 36-year-old Babby says while name changes are often viewed as a move influenced by merchandise sales, he says the bigger reason is to create synergy with fans in the marketplace.

“The merchandise advantage of going through an identity change is not as financially beneficial as people think,” said Babby. “Every sign in the ballpark has to be changed. That expense surpasses the instant merchandise sales.

“The impact [of a name change] is the activation and the energy, the love people feel for the hometown team. We recognize there’ll be lovers and haters to what we’re doing. It’s OK for people to be initially upset and surprised by this change, but we believe people will come along with us on this journey.”

Since the Suns began play in Jacksonville as a New Mets Triple-A affiliate from 1962-68 (no minor-league team in 1969), then returned as the Suns in 1970 in the Double-A Southern League, there has been only one previous name change.

Babby, who has already invested $1.8 million in amenities to the Baseball Grounds of Jacksonville, admits a name change has been in the works for about a year.

He hired the Brandiose company out of San Diego, who also developed the Akron RubberDucks logo, to put together a Jumbo Shrimp logo back in the spring. He didn’t see it until mid-July.