Did you know Mike Shannon was one of this area’s greatest multi-sport stars ever? 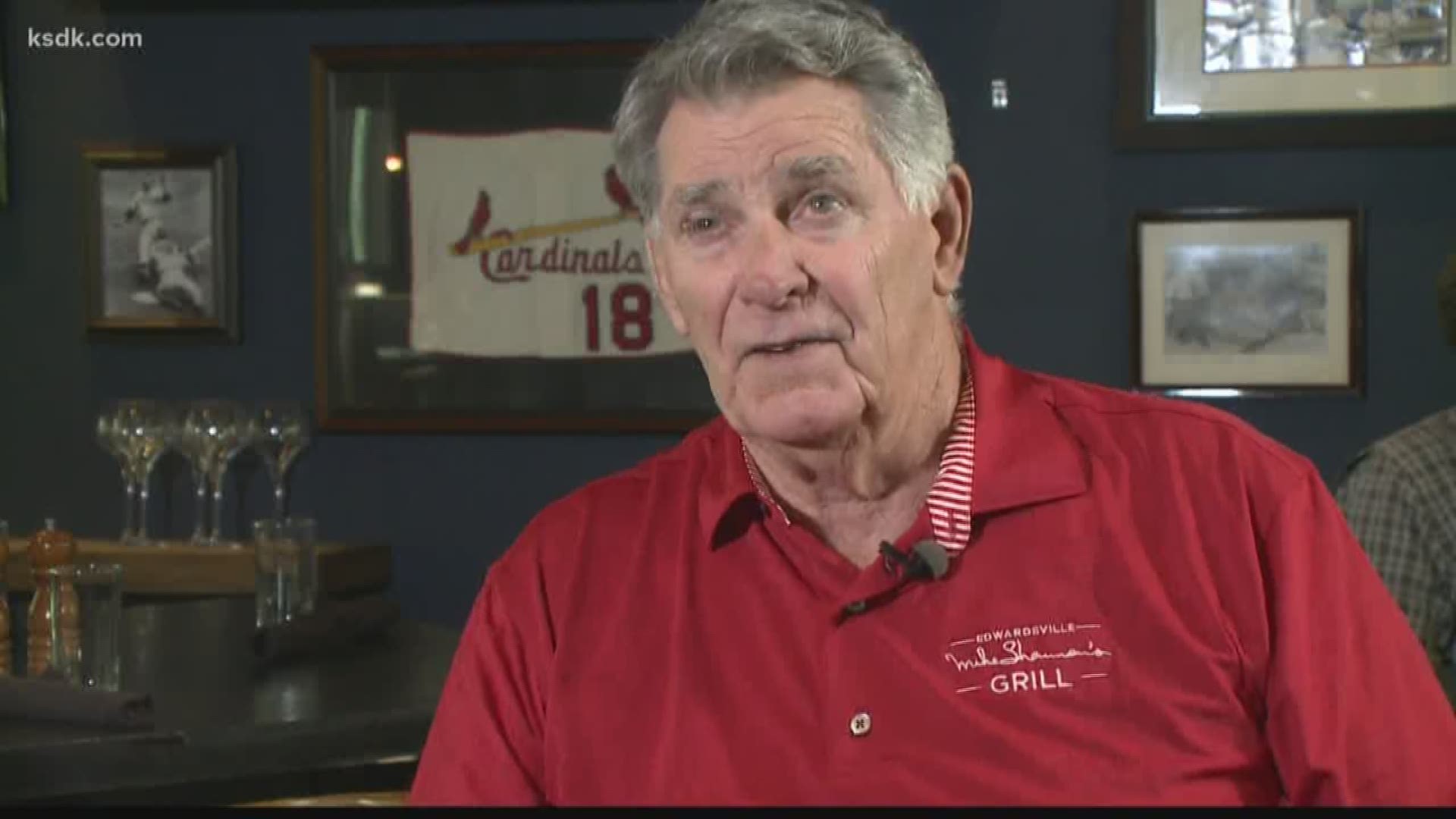 ST. LOUIS — Happy Birthday to one of a kind.

For those of us of a certain age that can remember when Mike Shannon was a Cardinals player, it’s a little hard to imagine.  But when you stop for a minute and think, no matter how old you might be Mike Shannon has always been there.

In the meantime, let’s touch on some things that maybe you don’t know about Mike Shannon. You’ll get more on Wednesday night, but I’ll touch on a big one right now.

Did you know Mike Shannon was one of this area’s greatest multi-sport stars ever?

Mike played football and basketball in addition to baseball at CBC. Ok, lots of guys do that – but do they excel in all three?

In baseball, Shannon was good enough to get offers to play major league baseball once he graduated. Ultimately, that’s the road he chose but he turned those initial offers down. Back then, MLB had a rule that if your bonus was more than $10,000 you had to spend your first two years on the team’s big league roster – the term they used was “bonus baby.”  As you can imagine, there weren’t many eighteen- year-olds who could do that and go on to a productive career. Still, you can go out to CBC’s baseball field and see Shannon and his No. 18 in a place of honor.

As a basketball player the 6’3 Shannon played center for the Cadets – by his own admission, he was a “driving center”   – “They didn’t make ‘em then and they don’t make ‘em now,” Mike told Frank Cusumano. Yet in one playoff game, Shannon shot 17-for-19 in a tournament game.  As a senior he was named the area’s Player of the Year.

In football he led CBC to an undefeated season as a senior. He was the Player of the Year then, too. Can you name any prep athlete in this area to be both the best football player and the best basketball player – in the same year? Good luck coming up with an answer.

Football was the direction he chose after high school. He headed to Columbia to play for the Tigers. Back in 1957 a freshman couldn’t play varsity and so he quarterbacked the freshman team and his talent had varsity coach Frank Broyles drooling. It wasn’t enough to keep Broyles around – Arkansas lured him away – but before he left (and for years after) Broyles told anyone who asked that Mike Shannon could win the Heisman Trophy; he was that good.

High praise, indeed. Shannon said he was thinking of leaving Mizzou himself and transferring to Southern California, but it wasn’t because he wasn’t getting any love from the coach who was hired to take Broyles’s place, Dan Devine.  Devine told Whitey Herzog years afterward that he also felt Shannon could have won the Heisman.

Stop and think about that for a moment. Mizzou with a Heisman Trophy winner.

It’s not hyperbole, if you check the records.  Had Shannon stayed, as a senior he would have been the quarterback on a team that ended up 10-1, losing only to Kansas. (That loss is still a sore point – the Jayhawks had to forfeit that game when it was discovered star running back Bert Coan was ineligible, so in the eyes of Mizzou and the Big Eight Conference, Mizzou actually went unbeaten and could have been national champions. The sore point comes from Kansas and the NCAA still viewing the 23-7 KU win as just that. Wait – inconsistencies by the NCAA? Get outta here.) The Tigers did go on to win the Orange Bowl, beating Navy and the actual Heisman winner that year, running back Joe Bellino. The Mizzou quarterback in that game, Ron Taylor, completed one of six passes, and he only threw for 302 yards for the season.  Plug Shannon in that spot and…well, one can only wonder.

In the meantime, Major League Baseball changed their bonus rules in the spring of 1958. Teams could sign players for any sum without restriction.  The Cardinals called Shannon and asked him to come and work out at Sportsman’s Park. As Mike tells it, he took batting practice against another phenom, 17-year-old lefthander Ray Sadecki. Shannon did well enough that the Cardinals offered him $50,000 to leave school and become a Cardinal.

Which he did, and 61 years later he’s still a Cardinal.