Each time the players step on the field and grab the football, they're playing with extra passion and drive this season in memory of their coach. 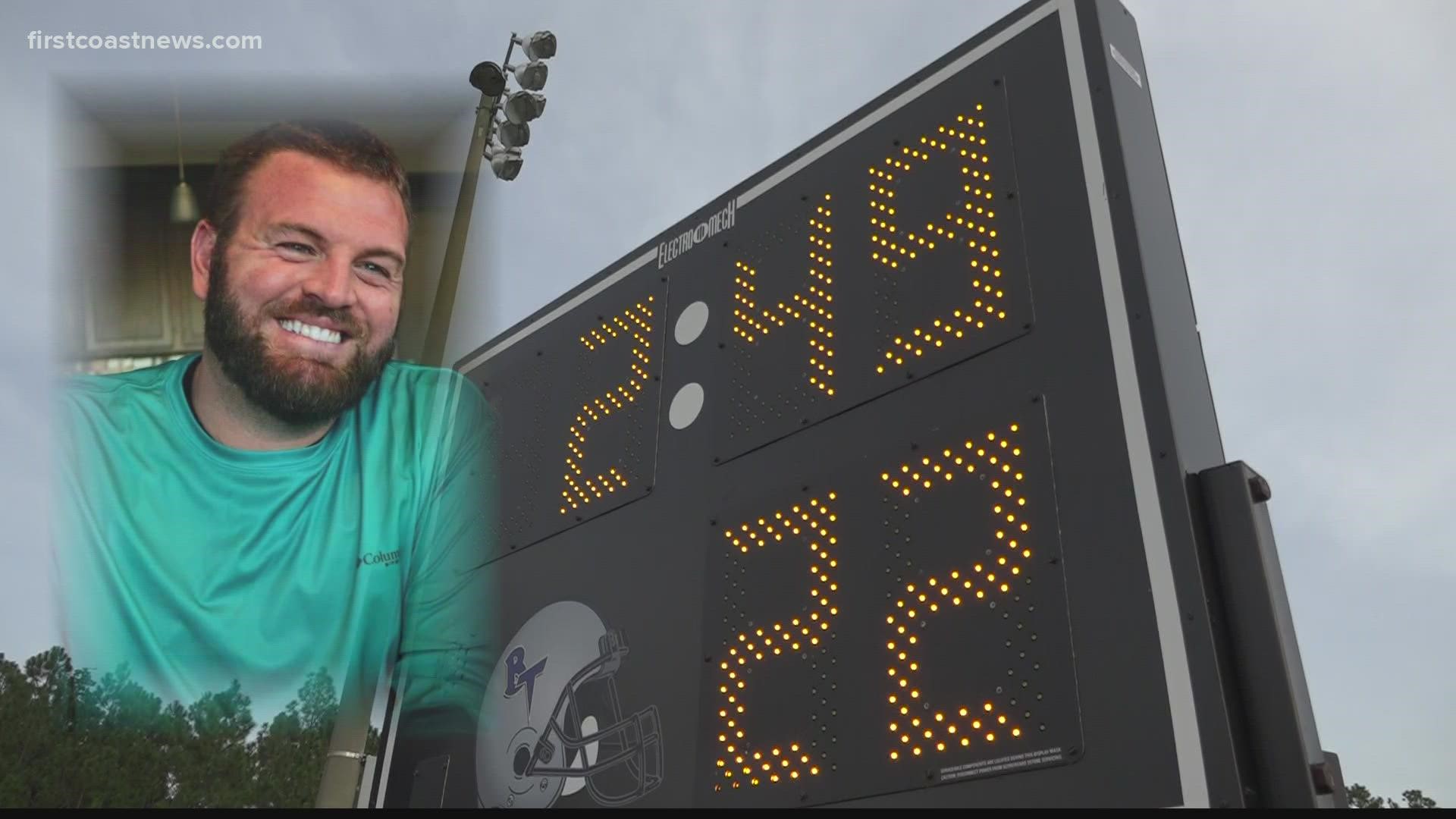 ST. JOHNS COUNTY, Fla. — Coach Jimmy Kirk was a JV offensive line coach at Bartram Trail High School, and although he may no longer physically be here with this group, the players say they can still feel his spirit.

"I was in some shock. Sadness. Madness," said Keith Cromwell/Defensive Coordinator at Bartram Trail High School. "Coach Kirk had been rushed to the hospital, and it wasn't good. He had passed. it was devastating."

"Why? Why him," said Eric Weatherly, running back for Bartram Trail High School?

Sadly, time came to an end for Coach Kirk.

At just 33 years old. he died unexpectedly in August.

"Anything he did, if it was filling up a water bottle or coaching somebody, he always gave his all in it. that's what I'm going to try to be in life and instill into others," Weatherly said.

Weatherly had an instant connection with the man he looked up to as a coach and mentor.

"I kind of went and talked to him about stuff I was struggling in school with. He was the guy to go to if you had a bad day," he said.

"He was always laughing. He always had a big smile on his face. He knew every kid by name. He could memorize names better than anybody, and so they loved him," said Cromwell.

The Bartram Trail High School football team plans to honor the coach they loved throughout the season.

"We've got some wrist bracelets, and then we're also doing stickers, jk for jimmy kirk. we're going to give those out to kids who display an engaged, positive, uplifting day in practice or in a game," said Cromwell. "We're dedicating this season to him. We're going to try and go undefeated and bring home the state championship for Coach Kirk."

Time. That's something that came to an untimely end for Coach Kirk.

But he'll symbolically be at the games with his hat and boots on the sidelines.

As time passes his legacy will continue through this group of young players.

Each time the players step on the field and grab the football, they're playing with extra passion and drive this season in memory of their coach.

. @BTHS_Football JV offense line coach James "Jimmy" Kirk died unexpectedly this month at just 33 years old. I'll have more on how players and coaches are remembering him & how the season is being played in his honor on @FCNsports @FCN2go #TeamSideline pic.twitter.com/8HJ8K5puyW

This is James "Jimmy" Kirk. He coached JV offense line players at @BTHS_Football and passed away this month at only 33 years old. The team is dedicating this season to his memory. @FCN2go @FCNsports #TeamSideline pic.twitter.com/Oj1GUuKJWe