Whether it's gymnastics or football, Cathy Hurst hopes athletes like her son Hayden and Simone Biles speaking out can help end the stigma on mental health. 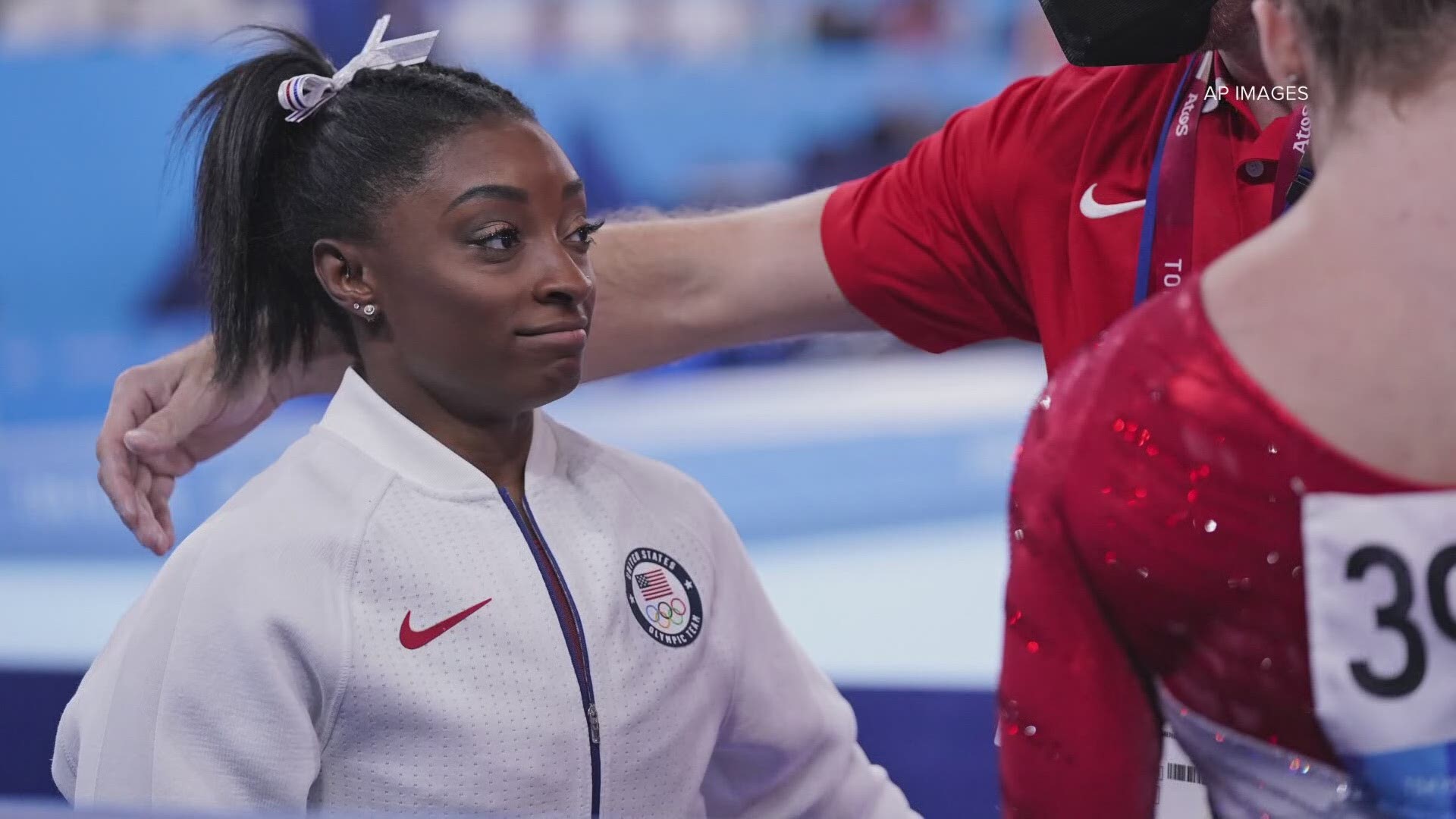 JACKSONVILLE, Fla. — U.S. gymnast Simone Biles pulled herself out of a second competition at the Olympics Wednesday. The decorated gymnast, with a combined total of 30 Olympic and World Championship medals, announced she won't participate in the women's all-around competition. She felt she wasn't in the right headspace to perform her truly death-defying tricks.

Biles is making her mental health a priority at the games, and a doctor at the Mayo Clinic said that could have a big impact on breaking the stigma.

"If you're not 100% mentally prepared, you may miss the landing, you may not complete the maneuver, and then certainly at the speeds and heights at which she goes could certainly lead to injury," said Mayo Clinic Dr. Chad Asplund.

Asplund said her decision to back out may have saved her from serious injury. He also believes by sharing why she pulled out, Biles has opened the door for all of us to discuss our mental health in the face of high pressure and high-stress situations.

"I do think having those high-level athletes kind of say those words and grapple with those things will help the rest of the public with those mental health issues as well," Asplund said.

One member of the 1996 American gymnastics squad that took the gold in Atlanta is also weighing in.

"There could be a catastrophic injury, no doubt, with the level of difficulty that is being asked in today's gymnastics," former gymnast Dominique Moceanu said. "I can't say, 'Hey, I'm not going to go and make myself get hurt,' because that wasn't an option for me in '96. That wasn't an option for our generation. It is now, and that's a good thing for her [Biles] to be able to acknowledge."

One of the most iconic memories of those 1996 games was women's gymnast Kerri Strug famously competing injured and being carried out to get her gold medal. It ended Strug's career. Biles' choice to put herself on the sidelines is shining new light on the mental pressures athletes face.

Jacksonville native, mental health advocate, and Atlanta Falcons tight end Hayden Hurst has been very open about his own struggles with mental health. His mother Cathy Hurst can sympathize with Biles.

“First, as a mom, my reaction was I just felt for her," Hurst said. “You could see from her facial expressions that she was struggling mentally.”

“For her to be able to step back and say, ‘You know what? I need to take care of my mental health.’ She could have hurt herself severely, and kudos to her for speaking out about it,” Hurst said.

Hayden was a star baseball player at the Bolles School. He played one year of football, and the Pittsburgh Pirates organization drafted him into their minor league team as a pitcher.

“He started having what’s called the yips, where we couldn’t feel the ball in his hand, and there again, his mind started questioning things," Hurst said. "Were the coaches looking at him? What was the issue he was having? He started having that self-doubt.”

That's when Hayden started experiencing anxiety and depression. He left baseball and walked onto the Gamecocks football team in South Carolina. That's where he tried to take his own life, hit rock bottom and turned his life around.

The Baltimore Ravens drafted Hayden in the first round of the 2018 NFL draft. Now he's making catches on the field for the Atlanta Falcons and having an even bigger impact off of it.

“What we do in Jacksonville is we actually support the Youth Crisis Center for the Hayden Hurst Family Foundation," Hurst said.

Cathy runs her son's foundation, which helps young athletes with their mental health.

Whether it's gymnastics or football, Cathy hopes athletes like her son Hayden and Simone Biles speaking out can help end the stigma around mental health.

“Mental health is so important, and more athletes need to recognize the fact they don’t have to be perfect," Hurst said. "Talk to people. Share with them your feelings. Be outward about it. I’m so proud of these athletes and individuals speaking out because mental wellness is just as important as physical wellness.”

The NFLPA named Hayden as the 2021 Alan Page Community Award winner for his mental health advocacy.

Cathy said plans for the Hayden Hurst Family Foundation in Jacksonville include 81 therapy sessions for student-athletes. 81 is Hayden's number on the Falcons.