They're back, now what's next? Marrone, Caldwell discuss plans for Jaguars

Jaguars will have new power-structure in 2020 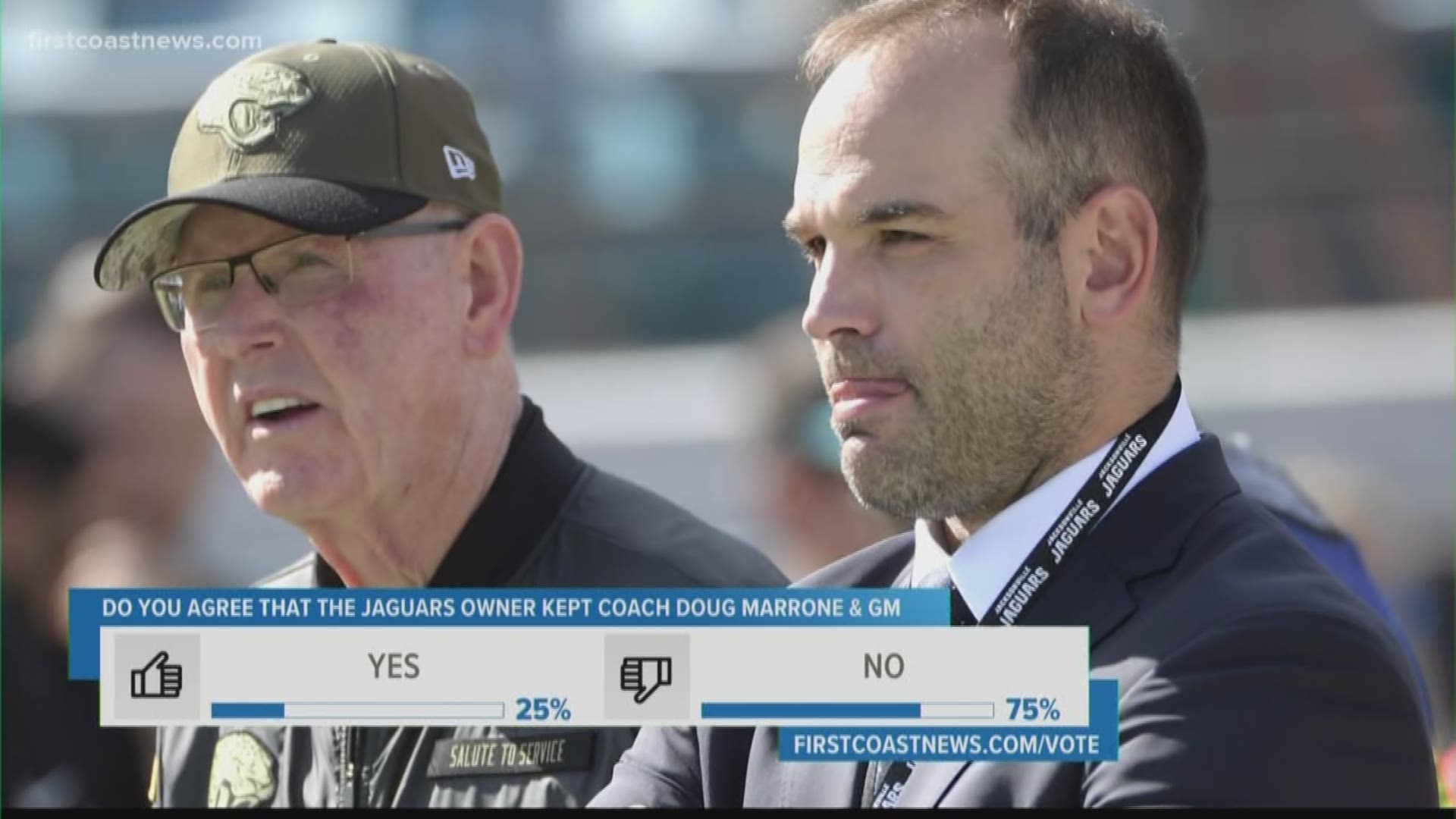 Like it or not, head coach Doug Marrone and general manager Dave Caldwell will be back for a third and seventh season, respectively, in Jacksonville in 2020.

But Jaguars owner Shad Khan also made clear that the pressure is on -- more than ever.

With Executive Vice President of Football Operations Tom Coughlin no longer in the picture, Marrone and Caldwell will report directly to Khan in 2020. The belief is that this structure will aide the Jaguars in their quest for their first winning season since 2017.

At Tuesday's press conference, both Caldwell and Marrone addressed specific areas where they see a need for growth and change as the Jaguars move on "post-Coughlin" -- again.

"I have a clear vision of the type of communication that I want with our players from different heads of the organization," Marrone said. "I think we can improve there and create a better environment [for our players]."

Marrone took that a step further, noting how not only does he, now in a more, empowered head coaching role, want to ensure every Jaguar player feels they matter: he wants to ensure every employee at TIAA Bank Field feels that way. He specifically mentioned one Jaguars Director of Marketing who, in his previous three years with the team, he had somehow never worked with. Marrone stressed the importance of that type of collaboration and open-working environment.

"I don't think I've spent enough time or shown them the vision or the focus that we wanna be -- or I've showed them how important they are," Marrone said. "When you're in this building, when you're an employee of the Jacksonville Jaguars: you have an affect on what we do on the field."

For Caldwell, the specific areas he noted he will need to improve are in making the Jaguars' roster more well-equipped and prepared in the face of injuries. He believes having a direct line to Khan -- something he had during his first three seasons in Jacksonville -- will aide that.

"It's just not the quarterback position: when we had injuries at linebacker, other positions, we gotta make sure that, 'hey, we're gonna have that through the season.' And we gotta make sure we have capable people of coming in here and filling those roles -- and making sure they can do more than one phase. Both special teams and offense or defense," Caldwell said.

As far as re-tooling the Jaguars' coaching staff, Doug Marrone said this would be re-evaluated when the staff returns to Jacksonville on January 13 for meetings. No changes would be made at this time.

Although they certainly noted their appreciation for his time as EVP, Caldwell and Marrone did enjoy some moments of light-hearted joking in regardss to Tom Coughlin. At one point during Tuesday's press conference, a reporter's cell phone went off.

"We reduced it," Marrone laughed.

If nothing else: it sounds like a different tone from the Jaguars for the first time since Coughlin's arrival in January 2017. 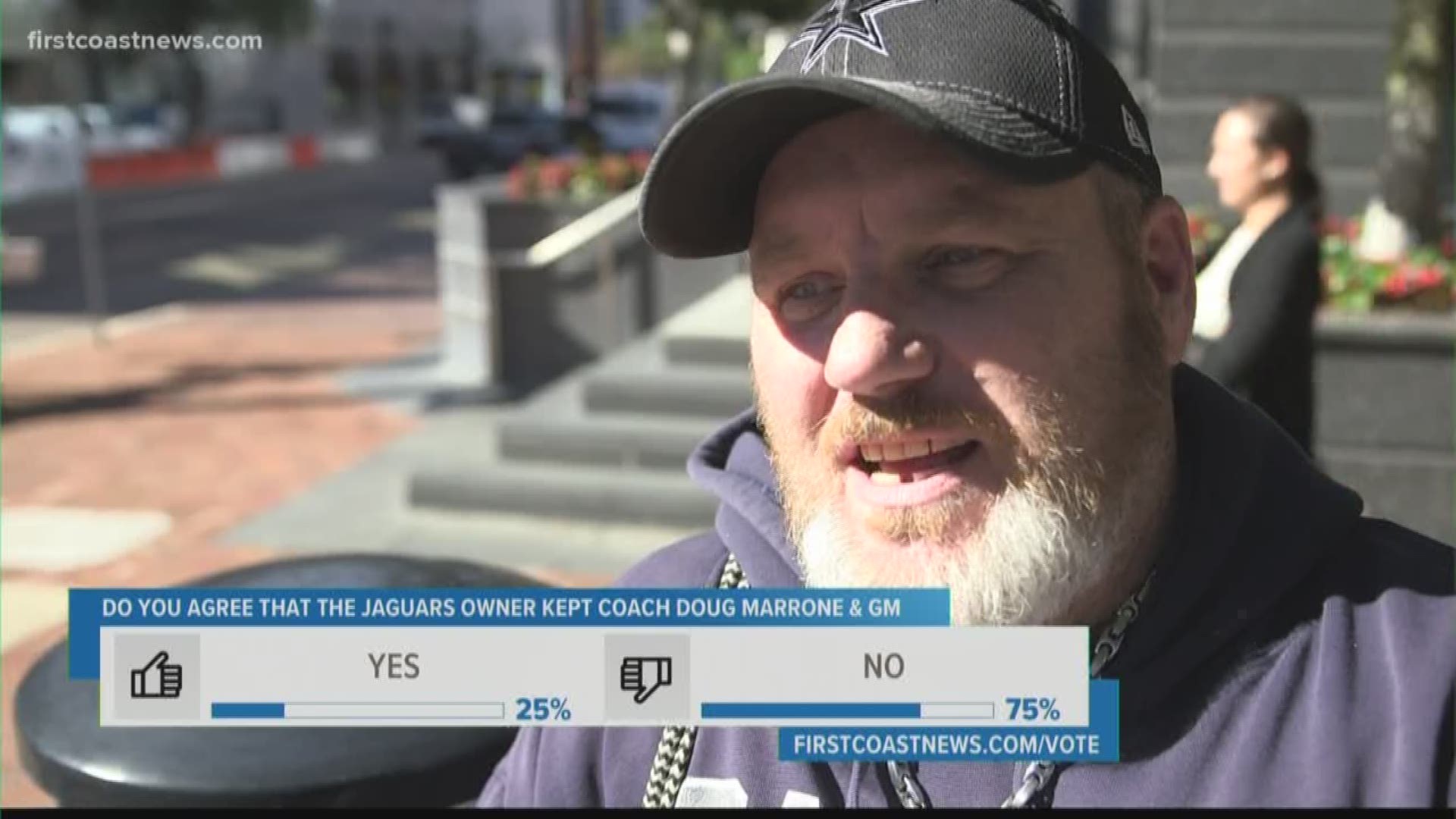