The latest on CJ Henderson, another big day for the Jaguars' rookies class, and other observations from the Jaguars' practice Tuesday 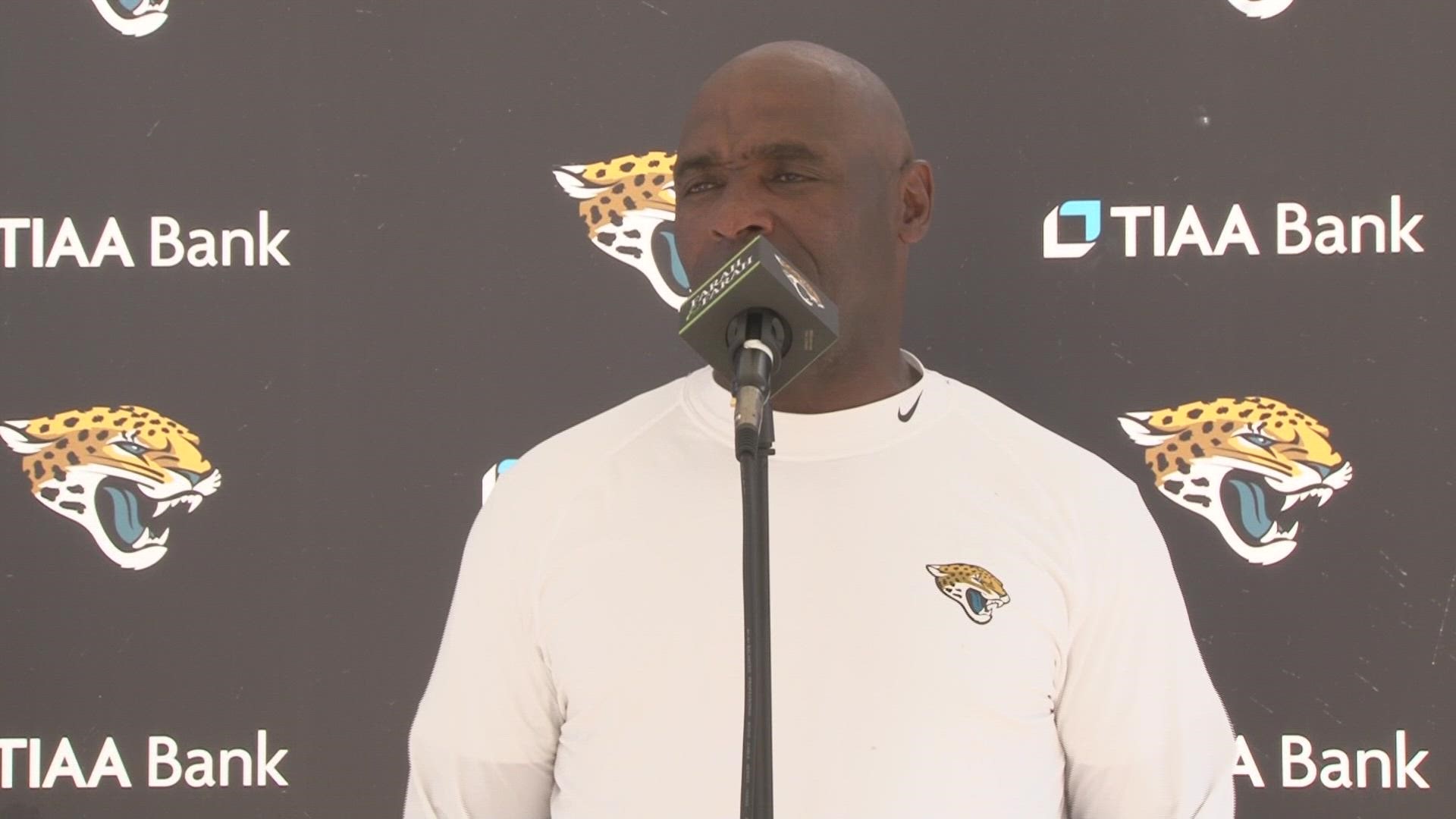 JACKSONVILLE, Fla. — With school beginning across Duval County, we know time is of the essence these days. So, for this week's Jaguars Training Camp News and Notes, we're going to keep things quick, simple, and to the point.

Sure, he wasn't a star on the field Tuesday. But Henderson's presence (or lack there of) has been the biggest storyline in Jacksonville over the past 72 hours.

The ninth-overall pick in the 2020 NFL Draft returned to the practice field Friday after missing 10 days on the Reserve/COVID-19 List and spending three days in the "Acclimation Period." He then was abruptly absent from Sunday's scrimmage for personal reasons; head coach Urban Meyer wouldn't elaborate on those reasons anymore than that.

The rumor mill has run amuck regarding Henderson since then. ESPN's Jeremy Fowler reported late Sunday that the Jaguars were entertaining trade offers for the former Florida Gator. Another rumor floated was that Meyer and associate head coach Charlie Strong had to go to Henderson's house to pick him up and bring him to practice last week.

Strong met the media Tuesday and said while he and Meyer did travel to Henderson's house, they did not have to drive him to practice; it was just a "conversation."

"Anytime you have a great young man like that, you want to make sure you're doing everything you possibly can to help him. And to help him get back on track," Strong said. "I was telling Coach [Meyer], we're out of the process of getting guys and pushing them aside. Our whole thing is creating value for them."

Strong did note that while Henderson is behind the eight-ball in terms of preparation, there is a considerable amount of time still before the Jaguars open the 2021 season at Houston.

"He wants to play [football]. He's gonna do everything he can to get back [in shape], and we're going to do everything we can to help him get back," Strong said. "He's a really good player... we know this: he can make us a better football team."

Henderson saw reps with the second and third team defenses Tuesday. He participated in position drills but did not partake in individual, one-on-one tackling drills. It's been free agent signee Shaq Griffin and the veteran Sidney Jones at outside cornerback with the first team offense, with veteran Tre Herndon starting at the nickel position. 2021 second-rounder Tyson Campbell has also provided depth at all three positions.

Something about "Winner's and Loser's Day" just brings out the best in the third-rounder out of Syracuse.

Anyone that has questioned the Jaguars' lack of (and need for) a physical safety should look no further than Cisco. He went 3-1 against wide receiver Collin Johnson in one-on-one's. Johnson is a full six inches taller and ten pounds heavier than Cisco. Cisco then broke up a Gardner Minshew, "third-down" pass to Ben Ellefson. His hips are as fluid as any player on the field, even when he's backpedaling at full-speed. He saw rep's with the first team defense for the first time in Camp on Tuesday.

Oh, and don't forget: he tore his ACL less than a year ago.

Allow me to re-introduce:

"Really doing well for us. Really excited about his total development.... he hasn't missed one beat," Strong said.

First and foremost: a happy belated birthday to the 1,000-yard rusher who turned 23 on Monday. He may be another year older (I'm joking -- 23 is not old), but Robinson looks as fast and agile as he ever has.

Despite being limited with an injury at Saturday and Sunday's practices, Robinson was a full-go on Tuesday. For anyone worried about what more depth at running back will do for Robinson's numbers: there is no need to fret. He got the first hand-off in Sunday's scrimmage. He got the first hand-off Tuesday. He's the Jaguars' No. 1 option. And on Tuesday, he showcased a shiftiness that most other "down-hill" running backs in the league do not have. His first step and quick cuts are faster (he school'ed veteran linebacker Joe Schobert in one-on-one's). And he hasn't lost a beat in pass protection or blocking ability.

I will be the first to admit: I had concerns about the second-year guard early on in Camp, particularly in pass protection. But since taking over for Andrew Norwell with the first team (Norwell is day-to-day with an undisclosed injury), Bartch has not only stepped up his game: he appears to have new-found confidence.

When he stepped in for Norwell over the weekend, Bartch raised eyebrows (in a good way) with his ability to open massive holes in the run-game. He still struggled a bit in pass protection, in addition to drawing a myserious personal foul, and in individual drills. On Tuesday, he was a 3-0-1 in one-on-one's, outdueling the likes of Malcolm Brown and Jihad Ward.

And, as mentioned, James Robinson got basically whatever he wanted on Tuesday. That's a credit to his offensive line.

He's quickly become a fan favorite and proven why the Jaguars gave him a three-year, $40 million contract, $29M of which is guaranteed. He had a particularly strong day on Tuesday, picking off Trevor Lawrence for the second time this Training Camp and coming up with pass break-up's on two, would-be touchdowns by Collin Johnson. He yelled back at Johnson after the first of those would-be touchdowns: "if you're gonna do it, then do it."

I sound like a broken record, but: the confidence and lead-by-example approach he and Rayshawn Jenkins have brought to this defense is rubbing off on others. It's not a cocky approach. It's a fun, loose but focused mind-set. Or as Jenkins told First Coast News: "dog-like."

- Rudy Ford, Andrew Norwell, and Phillip Dorsett were all in attendance at practice but did not participate due to undisclosed injuries. Strong said Ford is expected back Wednesday. Norwell will be "a few days."

- Taven Bryan is still on the Reserve/COVID-19 List, but did make an appearance at practice Tuesday, presumably as part of the "acclimation period." He has not practiced all of Camp.

- Besides Robinson, Jamal Agnew was the spark-plug of the offense Tuesday. As we discussed following Sunday's scrimmage, if he makes this team as a kick and punt returner, he's simultaneously going to be taking up a wide receiver spot. But he's showed he has the skills to play that position, too (he caught a touchdown from Trevor Lawrence Tuesday). He also took two hand-off's. As much as Shenault and Travis Etienne are regarded as the Jaguars' "gadget" players, Agnew could very well be the most versatile of them all.

- Despite that tough one-on-one with Robinson, it was another steady day for linebacker Joe Schobert, who had a nice pass break-up of James O'Shaughnessy and Trevor Lawrence.

- As if the new additions on the field didn't bring enough juice, the Jaguars' new coaching staff has done much of the same. In cheering for rookies Jordan Smith and Jay Tufele in individual rep's against the offensive line, defensive line coach Tosh Lupoi tossed his hat twice.. and it probably flew a bit further away than he was anticipating.

- For the third consecutive day, back-up quarterback CJ Beathard impressed. He was 5-of-7 with two touchdowns to Tavon Austin and Jeff Cotton. His passes don't zip quite like Lawrence's, but there was a definite fast-ball velocity to his touch Tuesday.

- Jarrod Wilson tallied the second interception of the day (of Beathard), his second of Camp.

The Jaguars will be back out on the practice field Wednesday morning. Practice is open to the media but closed to the public. The Jaguars square off with the Browns in their first preseason game on Saturday.