Ten-foot long unit can serve 14 drinks per minute, clear a line of 35 in five minutes 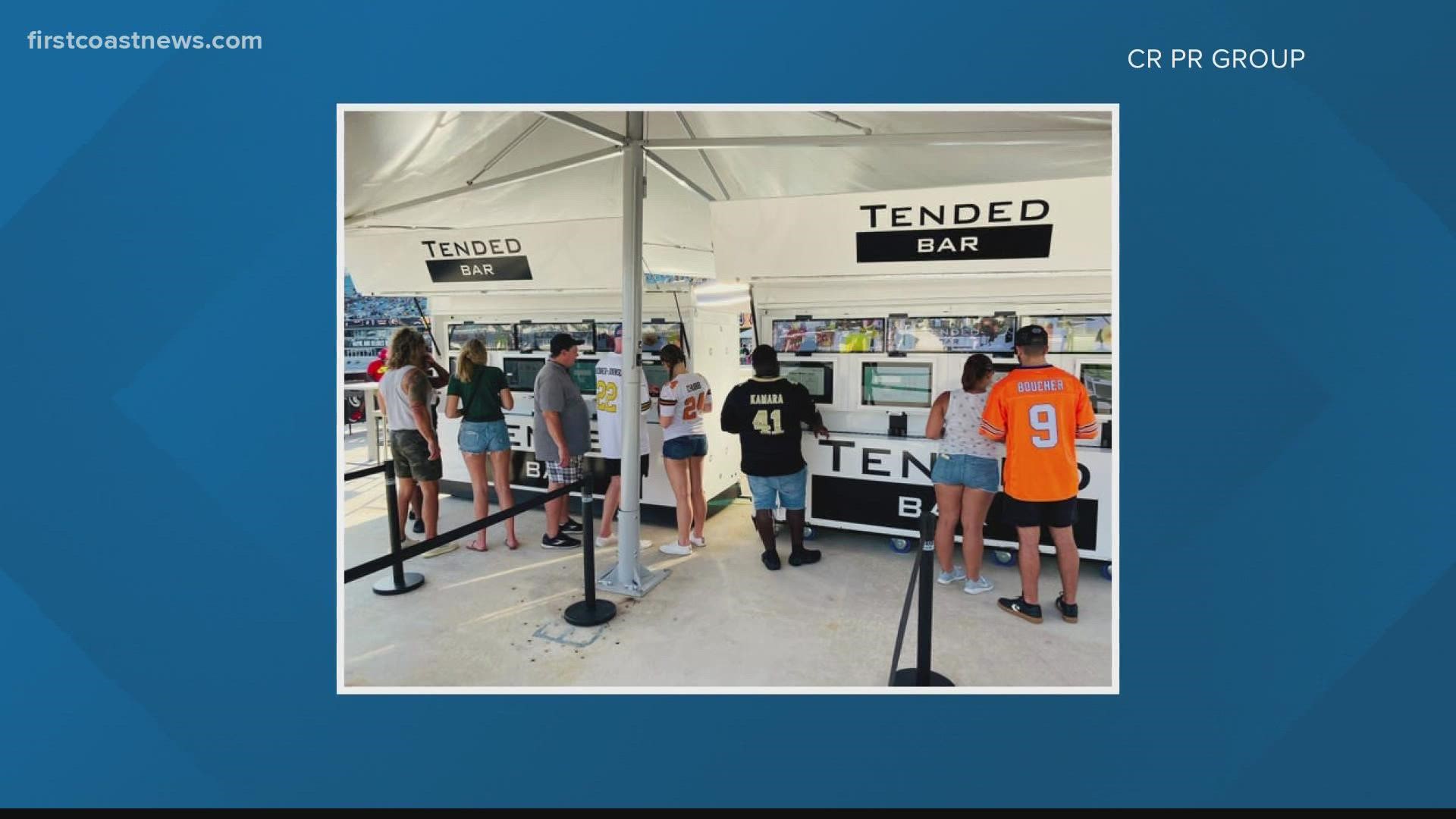 JACKSONVILLE, Fla. — Two brothers -- one the inventor, the other the entrepreneur -- have joined forces to make the process of getting a mixed drink at Jaguars' home games a little less time-consuming and a lot more convenient.

TendedBar, a portable, 10-foot-long dispenser of beverages that can hold 10 liquors (20 liters per type) and 18 mixers at a time, was first tested at the VyStar Arena at 2019 Ice Men games, the Jaguars preseason game against Cleveland and most recently last week's Saints-Packers game.

The full roll-out comes on Sunday when the Jags play host to the Denver Broncos, with seven TendedBars at various high-traffic areas at TIAA Bank Field.

Justin Honeysuckle, a Jacksonville Beach resident and his half-brother, Jay Perkins of Nashville, have been working on the concept for eight years. Honeysuckle has a degree in interior architecture from Florida State and Perkins has an electrical computer engineering degree from Purdue.

Honeysuckle's step-father, Matt Perkins, was an automation engineer for Rockwell Automation in Milwaukee, so it's a family steeped in technology, inventiveness and big dreams.

"I've always had an entrepreneurial mindset, so I've been handling the business side and Jay does the tech side," Honeysuckle said. "I told him, 'You make it work, I'll make it look good.' My dream has always been to own a bar at the beach but at this point, I guess we own a bar at the stadium."

Perkins designed the TendedBars to be more high-tech versions of the commercial soda dispensers found in restaurants. And it's American-made: the company is based in Jacksonville, the shells of the bars are assembled in Hattiesburg, Miss., by Howard Industries, and plumbing parts in St. Louis by Vivian Companies and the soda system by Well Built of Newport Richey.

Each bar has four touch screens where fans can scan their driver's license for proof of age and a credit card number. After that, Trueface facial recognition technology will be used and all the information will be stored in the TendedBar system so patrons will have to go through the initial process only one time.

After that, it's a simple matter of using touch screens to dial up a favorite beverage (call brands are loaded in the machine), mixer and amount. Fans can get singles or doubles (double shots will be the maximum allowed for one visit), and in a tall or short container.

Analytics will store a customer's most frequent purchases to make the process even faster.

It can be as simple as a scotch and water or as complex as a margarita.

"We can get pretty exotic if fans want to," said Honeysuckle, a 37-year-old father of two. "It's a vessel, like a margarita machine -- but a really smart one."

Another aspect of the service with the pandemic still ongoing is it provides more social distancing than a crowded bar.

None of the drinks are pre-mixed and Honeysuckle promises patrons will get a full pour -- 1.5 ounces of alcohol for a single, 3 ounces for a double.

"It's the same industrial automation used in bottling factories," he said of the precise measuring of the alcohol. "Our goal is to make a good cocktail. If that doesn't work, we don't work. They're going to get a real drink."

The price point is the same as for an alcoholic beverage purchased at any of the bars at the stadium, with one exception -- fans don't have to tip.

And the whole idea is speed. Rather than waiting in a long line for a harried bartender to mix a drink, one TendedBar can serve fans 35 drinks within a five-minute period, all the better to get in and out and back to the game.

"We've got the TendedBars in high-traffic areas where it can get really congested," he said. "One of our goals is to keep fans from missing as little of the game as possible."

Most of the past eight years have been raising the capital to build the machines. The brothers had Dallas Mavericks owner Mark Cuban as an initial investor but when they raised money through other courses (including crowdfunding) they bought out Cuban's initial share.

The first machine was built in Honeysuckle's driveway at his Neptune Beach home. When it was ready, a longtime friend, Jaguars senior director of facilities operation, Ryan Prepp, helped him get the machine placed in the stadium for the 2018 Country Superfest as a beta test of sorts.

During that event, VyStar Arena food and beverage manager Mark Micallef happened by and loved the concept. That led to TendedBars being placed at the VyStar Arena.

"The Jaguars and the arena have been amazing in giving us this opportunity," Honeysuckle said. "We're doing our best to prove them right."

Part of Jaguars' vision for fans

Jaguars' senior vice-president for sales, service and chief content officer Chad Johnson said the TendedBar concept fits right in with the organization's emphasis on using technology to enhance the fan experience, from ticketing to food and beverage.

"Innovation continues to drive the Jaguars in every face of our business, particularly when it comes to the game-day fan experience," Johnson said in a statement. "Our partnership with TendedBar is a great example of using new technology to provide our fans with a premium product with efficiency and ease."

Delaware North, the food and beverage vendor for ASM Global, the stadium management, provides the ingredients for TendedBar, and gets a cut of the sales.

Honeysuckle said there are safeguards built into the system. TendedBars must close at the same time as stadium or arena bars close and there are limits based on time and quantity on how many drinks one fan can purchase.

Honeysuckle said the company's intention is not to replace bartenders. Whatever else a TendedBar can do, it won't listen to your problems.

But neither will a TendedBar call in sick, pour you the wrong drink or make you wait.

The brothers are already looking to the future. They've making overtures to other pro sports franchises and venues and a theater chain in Los Angeles. Honeysuckle said a TendedBar is a natural for cruise ships and hotels.

"A lot of hotel bars don't open until the afternoon," he said. "But people wouldn't mind getting a cocktail to take to the pool at noon, or get a mimosa or Bloody Mary in the morning."

In other words, the commercial possibilities are endless, including large restaurant chains purchasing hundreds of units.

For now, the going is a bit slow. The company has nine TendedBars in stock, five being shipped and 17 in production. He declined to say how much one TendedBar costs.

"Supply chains issues are a little crazy right now," he said. "But we've learned to be patient."