The Evolution of Allen Robinson, Part 3: The big letdown

In Part 3 of "The Evolution of Allen Robinson," the wide receiver discusses the most disappointing season of the Gus Bradley era. 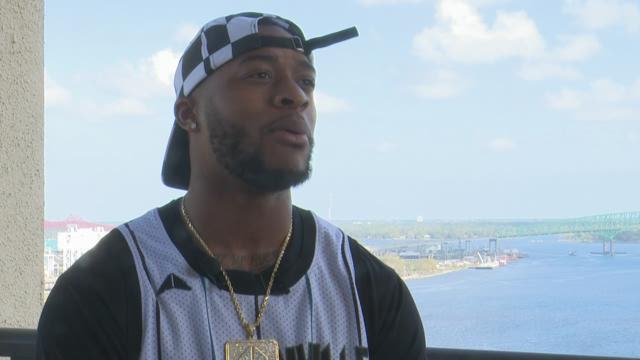 JACKSONVILLE, Fla. — Heading into his third NFL season, Jaguars wide receiver Allen Robinson was a star on the rise.

Coming off his first Pro Bowl appearance, Robinson was considered to be the focal point of the Jaguars' offense. He had set team records in 2015 and was lauded as a touchdown-scoring machine.

Much like Robinson, the Jaguars seemed to be positioned for improvement in 2016, with some experts going as far as to predict that Jacksonville would be a playoff contender. Robinson was among that bunch.

Unfortunately, the optimism lasted just a few weeks into the regular season. The Jaguars started off 0-3 before a two-game winning streak gave Jacksonville a glimmer of hope. That temporary reprieve was crushed by a nine-game losing streak.

"I had no doubt in my mind that year was going to be the year and it's crazy how things worked out," Robinson said during an interview with First Coast News at his home in downtown Jacksonville.

More than a year removed from that dreadful 2016 season, Robinson still doesn't understand what went wrong.

The Jaguars put together the strongest training camp of Robinson's tenure to that point. The team's confidence level and regular-season expectations were boosted by its performance against the Tampa Bay Buccaneers in joint practices during training camp.

"From a team standpoint, I thought we had a really good offseason [in 2016]," Robinson said.

"There was one day during training camp where we went up against Tampa Bay and from a receiver standpoint, we went 21-of-21 or 23-of-23 on one-on-ones. There were times — I can remember back — where we were just making plays in red zone period."

Robinson was the face of the franchise that season. He faced lofty expectations from fantasy football players, Jaguars fans, his teammates, his coaches and himself.

Unfortunately, much like his team, Robinson failed to live up to the hype.

He struggled with dropped passes and his production on the stat sheet dipped significantly from his impressive sophomore output.

It all added up to the most disappointing season of his young career.

"The frustrations of that year just grew and grew," Robinson said.

"We got to Game 7 or so and then we fired our offensive coordinator so I think that was a big wind out of a lot of guys’ sails from that standpoint."

Then-head coach Gus Bradley fired offensive coordinator Greg Olson just a few days after a 36-22 loss to the Tennessee Titans on Thursday Night Football. Robinson found out about Olson's firing while scrolling through Twitter on his phone.

"You feel for that guy because for me — playing for Coach Olson — I knew how much this meant to him," Robinson said while sitting on his top-floor patio with his back facing EverBank Field.

"He eats, sleeps, wakes up, breathes football. That’s a guy who [thinks] football, football, football. He had so much of an influence on us as young guys in our careers. We all saw some of the peaks of our careers with him, so for him to be able to see that and then to come back to we didn’t take that next step, it was tough on us all. It was really tough on him, and as players, it was really tough on us as well."

Olson was replaced by then-quarterbacks coach Nathaniel Hackett. The Jaguars' offense would work with its third coordinator in three seasons.

"It was one of those things where it was like our ship had just been set on fire," Robinson said.

"You see the fire on the ship and you’re in the middle of the ocean and there’s nothing you can do, so the only thing we could really do is kind of resurrect what we had left of that season. From a mental standpoint, from a playing standpoint, to just try to build the blocks that were next to come."

The ship wasn't just set ablaze. It was also sinking with its captain.

Even after the coordinator change, the Jaguars lost seven-straight games. Bradley was fired following a Week 15 loss to the Houston Texans.

The head coach was relieved of his duties before the team left for the Houston airport.

"We were actually on the bus and I believe my sister told me [about Bradley's firing]," Robinson said.

"It had hit ESPN or something like that and we were all on the bus, actually we hadn’t even left NRG Stadium. We hadn’t left the stadium yet and that’s when we found out. It was tough on a lot of us because Gus is one of those guys where, Gus was a coach, but also a mentor with certain aspects of being a player and grooming a player into this league."

Bradley was a well-liked leader in the locker room. Unfortunately for him, the Jaguars were just 14-48 under his leadership.

"Still, to this day, I think back on that and I have literally not the slightest of ideas," Robinson said.

"I really don’t. It’s something that we may not ever know. Again, how it started off that year, from the time we stepped foot into camp, I would have never guessed that. I would have probably bet my salary on that we would have been a playoff team."

Marrone's brutally honest approach immediately stood out to Robinson. The Jaguars had two games left in the season and Marrone wanted to make sure his players knew they were playing to win.

"Doug really is one of those guys who is going to sit you down and tell you what he sees," Robinson said.

"As a team, he told us what he saw, what we were honestly terrible at that year and some things we were doing well."

The Jaguars went 1-1 during Marrone's interim campaign. Robinson finished the season with an underwhelming 73 catches for 883 receiving yards and six touchdowns.

Jacksonville entered the offseason poised for change. However, that change was limited to interpretation, as Marrone was retained as head coach. Hackett and defensive coordinator Todd Wash were also retained.

Despite the familiar faces at the top of the coaching totem pole, Robinson said there was still plenty of change to get used to heading into 2017.

"We hadn’t really played for Doug [outside of] two games," Robinson said.

"We had gained a little bit of familiarity with Hackett and his system, but all and all, you didn’t really know what was coming next."

Part 4 of 'The Evolution of Allen Robinson' will focus on the wide receiver's shortened fourth NFL season and his journey back from ACL surgery.