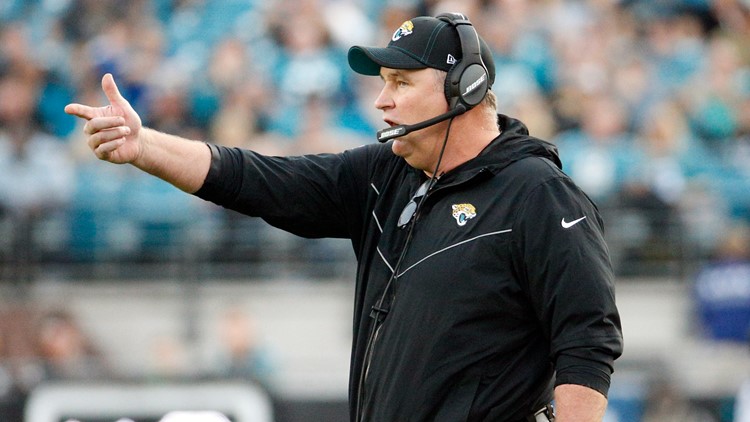 Photo by: AP
Jacksonville Jaguars head coach Doug Marrone directs his players against the Indianapolis Colts during the first half of an NFL football game, Sunday, Dec. 29, 2019, in Jacksonville, Fla. (AP Photo/Stephen B. Morton)

With the announcement Monday that the Jaguars and offensive coordinator John DeFilippo had parted ways, the conversation now shifts to who will call plays for Jacksonville in 2020.

Whoever is chosen will be the organization's fifth offensive coordinator in six seasons, succeeding the likes of Nathaniel Hackett, interim Scott Milanovich (the Jaguars now departed QB Coach), Greg Olson, and Jedd Fisch.

One interesting note: prior to being named interim and, later, full-time head coach, Doug Marrone was on the Jaguars' staff as "assistant head coach" -- and he had previous head coaching experience in Buffalo. Could Shad Khan prepare for another "contingency plan" should he dismiss Marrone midway through 2020 by hiring another, former head coach as OC?

Here's a look at some of the possible candidates for the coaching vacancy:

Many forget that, prior to ascending to the head coaching position of the Dallas Cowboys, Garrett was the team's offensive coordinator (2007-2010). During his 12 years in Dallas, Garrett helped develop quarterbacks Tony Romo and Dak Prescott, the latter of whom was a fourth-round draft pick. Although he did not call plays this year, the Cowboys were the top-ranked offense in the NFL, averaging 431.5 yards per game.

Garrett's contract was not renewed after almost a week of discussions with Cowboys owner Jerry Jones -- who Jaguars' owner Shad Khan considers a friend.

Prior to moving to Dallas, Garrett served as the Dolphins' Quarterbacks Coach (2005-2006) and played in the NFL for eight seasons.

Another former head coach who could go back to calling plays from an offensive coordinator position, Gruden was relieved of his duties in Washington in early October. He had been the Redskins head coach since 2014.

Gruden's 35-49-1 record and one playoff appearance as a head coach is not too appealing to the naked eye; however, he was part of his brother, John's, staff that led the Tampa Bay Buccaneers to the 2002 Super Bowl, and was instrumental in Andy Dalton's development (and a string of five straight playoff appearances) while serving as the Bengals' offensive coordinator. The Redskins lone playoff appearance under Gruden (2015) proved his resiliency as a head coach and leader, as incumbent starting quarterback Robert Griffin III was riddled by injuries and Kirk Cousins stepped in to break numerous team records.

Gruden interviewed for the Jaguars' open head coaching position in 2013, but instead signed an extension in Cincinnati. He would depart for Washington a year later.

Yet another former head coach (are we sensing a trend?) that could return to the booth to call plays in 2020, Caldwell sat out the 2019 season for health reasons, after initially agreeing to become the Dolphins' Quarterbacks coach. Caldwell led the Detroit Lions from 2014-2017 and the Indianapolis Colts from 2009-2011. Nestled between those two tenures was a stint as the Baltimore Ravens offensive coordinator, which included their 2013 Super Bowl run.

The list of quarterbacks he's worked with is easily the most impressive of any candidate on this list, including the likes of Peyton Manning, Joe Flacco and Matthew Stafford.

Nope, this candidate doesn't have head coaching experience -- but he was a candidate for the Jaguars' open offensive coordinator position a year ago.

Monken instead ended up in Cleveland for the 2019 season but did not call plays; that fell to head coach Freddie Kitchens, who was fired at the end of the season. A long-time college coach, Monken got his start in the professional ranks in Jacksonville, helping lead the Jaguars back to the playoffs in 2007 as Wide Receivers coach. Prior to the move to Cleveland, Monken served as the Buccaneers' offensive coordinator from 2016-2018, helping lead the development of Pro Bowl wide receiver Mike Evans.

As D.J. Chark continues to develop -- and the Jaguars strive to improve their wide receiving corp -- bringing in the vertical-minded Monken would certainly change things up from the "power football" mantra of the Coughlin-Marrone Era.