The recently released DIA staff report on the Four Seasons proposal says the city would put up as much as $114 million for various financial incentives. 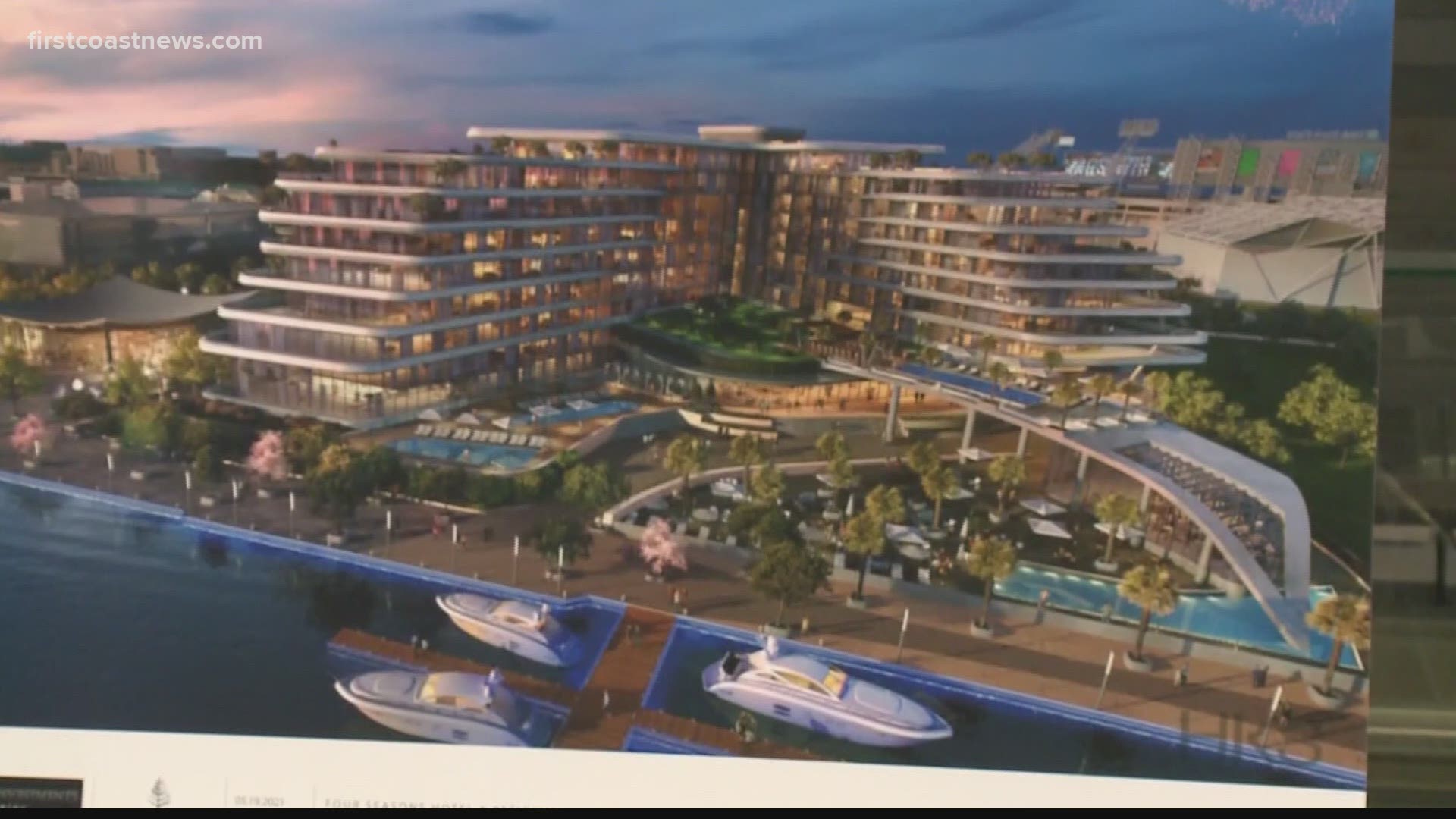 JACKSONVILLE, Fla. — Jacksonville would get $1 in new tax revenue and other financial benefits for each $1 it puts into Jaguars owner Shad Khan's planned Four Seasons hotel development, achieving a rate of return far better than Khan's doomed proposal for turning Lot J into an entertainment district, according to a Downtown Investment Authority report.

In contrast to the dollar-for-dollar return from the Four Seasons development on the riverfront, the Lot J development in the sports complex would have returned 40 cents to the city for each $1 in incentives, according to a DIA analysis done last year on that deal. The Lot J venture failed to win City Council approval in January.

The recently released DIA staff report on the Four Seasons proposal says the city would put up as much as $114 million for various financial incentives, donated land and other costs related to building a five-star hotel, luxury condominiums and a new office building on open land that used to be the Kids Kampus portion of Metropolitan Park.

The city of Jacksonville would gain $114 million in new revenue from sales, property and hotel bed taxes over 20 years, along with revenue from a ground lease and payments by Khan for enhancements to about 14 acres of Metropolitan Park that would be untouched by the private development.

"We are proud of the hard work by both sides to arrive at this recommendation, which we feel will deliver exceptional value to the city of Jacksonville throughout the term of the project," Khan said in a statement.

Other hurdle:Jacksonville would need state approval for land swap to clear way for Four Seasons Hotel

His firm Iguana Investments would spend a minimum of $301 million up-front in private dollars for a 176-room hotel with a spa and other resort amenities, 25 condominiums that would sell for millions of dollars apiece, 99,000 square feet of Class A office space, and 39,000 square feet of retail space.

The terms of that development agreement will get their first round of votes on Friday by the Downtown Investment Authority when its members decide whether to go forward by giving other would-be developers 30 days to submit their own proposals for using that city-owned property.

Jaguars officials have been meeting with DIA staff since last year about the plans for the Four Seasons Hotel and Residences. The Jaguars have hosted a series of town hall meetings in the Jacksonville area to show off the development plans while continuing to work with DIA on finalizing terms of an agreement that will go to the DIA board and then City Council.

"We are heartened by and appreciative of the support we’ve received since announcing our plans last month," khan said. "While we know there is more work to do, it is encouraging to see that we are far from alone in believing in the promise of our downtown and the positive and immediate impact this project can have on our friends and neighbors throughout our region."

How this compares with Khan's Lot J deal

City Council voted in January against another large-scale development proposed by Khan for turning the Lot J parking lot near the football stadium into an entertainment district with apartment buildings, a hotel, stores and restaurants.

Council voted 12-7 in favor of that deal, but that fell one vote short of capturing the super-majority needed because that legislation would have amended the city's capital improvements budget.

Opponents of the Lot J deal cited an analysis by the City Council Auditors Office that showed the city's return on putting up as much as $233 million would have been 44 cents per dollar.

A DIA report on Lot J said the city's return on taxpayer investment would have been even less at 40 cents for each $1.

DIA did not negotiate the Lot J development agreement, but at City Council's request, DIA  reviewed the terms hammered out by Mayor Lenny Curry's administration and the development team of Khan and The Cordish Companies.

This time around, DIA staff did the negotiations for the proposed Four Seasons Hotel and Residences and office building.

In another difference from the Lot J deal, the bulk of the city's share of the deal for the Four Seasons would come after the project is built.

The city would provide $47.7 million in property tax rebates over a 20-year period based on returning 75 percent of the city taxes generated by the value of the new development.

The city would pay a $25.8 million "completion grant" to Iguana after the hotel, residences and office building are constructed.

In a non-cash incentive, the city would convey a $12.45 million parcel of land to Iguana for the hotel portion of the development for a nominal cost of $100.

In addition to direct incentives to Iguana, the proposed development agreement would pay smaller amounts to make the development possible such as relocating a fire station and dock, moving a historic fire museum building, and making improvements to the public marina.

Plan would bring a luxury hotel to Northeast Florida

The property tax rebates would be directly tied to the hotel being a Four Seasons brand, which is one of the world's most exclusive. If a different brand goes with the hotel, the city would not pay the tax rebates unless Khan went to the DIA board and got approval for the switch.

Any change from the Four Seasons flag would have to ensure the hotel is a luxury hotel, which would be defined based on the Forbes Travel guide "or other respected source" ranking the brand as a four-star or five-star hotel, according to the proposed development agreement.

If the DIA board refused to give its blessing to a change in the hotel's brand, the name still could change but the city would stop rebating property taxes from that point forward.

The Forbes Travel Guide does not give five-star ratings to any existing hotels in Northeast Florida. The lone four-star rating for this area goes to the Ponte Vedra Inn & Club. In the category of spas, Forbes awarded four stars to the Ritz-Carlton Spa on Amelia Island and the Spa at One Ocean in Atlantic Beach.

A Four Seasons hotel would give Jacksonville a brand that few cities have nationally or globally. Khan, whose main business is in automobile parts manufacturing, owns a Four Seasons in Toronto.

Iguana Investments commissioned a report by CBRE that examined whether the Jacksonville market can support a Four Seasons hotel.

The study determined that in 2025, which would be the projected opening date for the Four Seasons, the hotel would have a projected occupancy rate of 57 percent and average daily room rates of about $411, according to the DIA staff report. The study said the occupancy rate would grow to 70 percent by 2029 with room rates rising to $462 on average.

For the 25 condominiums in the Four Seasons residences, the market analysis showed the development could support 43 to 79 residences. CBRE found that building just 25 of them "significantly lessens the risk" of building such "uber-luxury" residences, according to the DIA staff report.

The biggest condominium would be a 19,000 square foot penthouse whose sales value would equate to $16.5 million, according to the staff review of the CBRE analysis.

The other residences would have an average size of about 3,600 square feet and a cost of around $3.1 million apiece.

The real estate value for the condominiums and the high room rates for the hotel help to generate more tax revenue for the city than comparably sized residences and hotels would.

The DIA analysis notes that if tax revenue generated by the development is expanded to include more than just taxes that flow to City Hall coffers, that would cover about $37 million more in taxes mainly for schools along with the St. Johns River Water Management District and Florida Inland Navigation District.

The proposed development agreement also spells out how DIA will seek to lift a state restriction that prevents development on the 10-acre Kids Kampus parcel.

The site currently is restricted for outdoor recreational use as a park because the city received a $1.5 million state grant in the mid-1980s.

To free up that land for Khan's proposed development, the city would seek Florida Department of Environmental Protection approval for a land swap switching the park to  at least 10 acres closer to downtown in the city-owned land known as The Shipyards.

The proposed agreement says if the city cannot obtain the state's consent for a land swap by Oct. 1, Iguana Investments could seek to negotiate with the state over buying out the grant restriction at Iguana's own expense. The state has said that because of interest on the original grant amount, the cost for such a buyout would be $21 million.

The DIA is working with the Jessie Ball duPont Fund's study of the downtown riverfront to come up with a plan over the summer for creating the new city park on the Shipyards.

The Downtown Investment Authority is scheduled to meet at 1:30 p.m. Friday in a conference room at the main library in downtown.