My apologies for the absence of this Monday Morning column last week. It was my birthday and the Jaguars’ originally scheduled bye week, so I was off for a few days (I hope you can find it in your heart to forgive me).

And speaking of my birthday: what a gift it was to return to Doug Marrone’s bye week press conference last Tuesday.

(I’ve included the video below as well, but, in case you don’t have time to view it in its entirety…)

“I’m not going to bullsh*t anyone -- I’m kind of fired up,” Marrone began his climactic monologue of the 20-plus minute teleconference. “I’m going to go after it and however it falls, it falls, but it’s open for me. I’ve done crazy sh*t before. 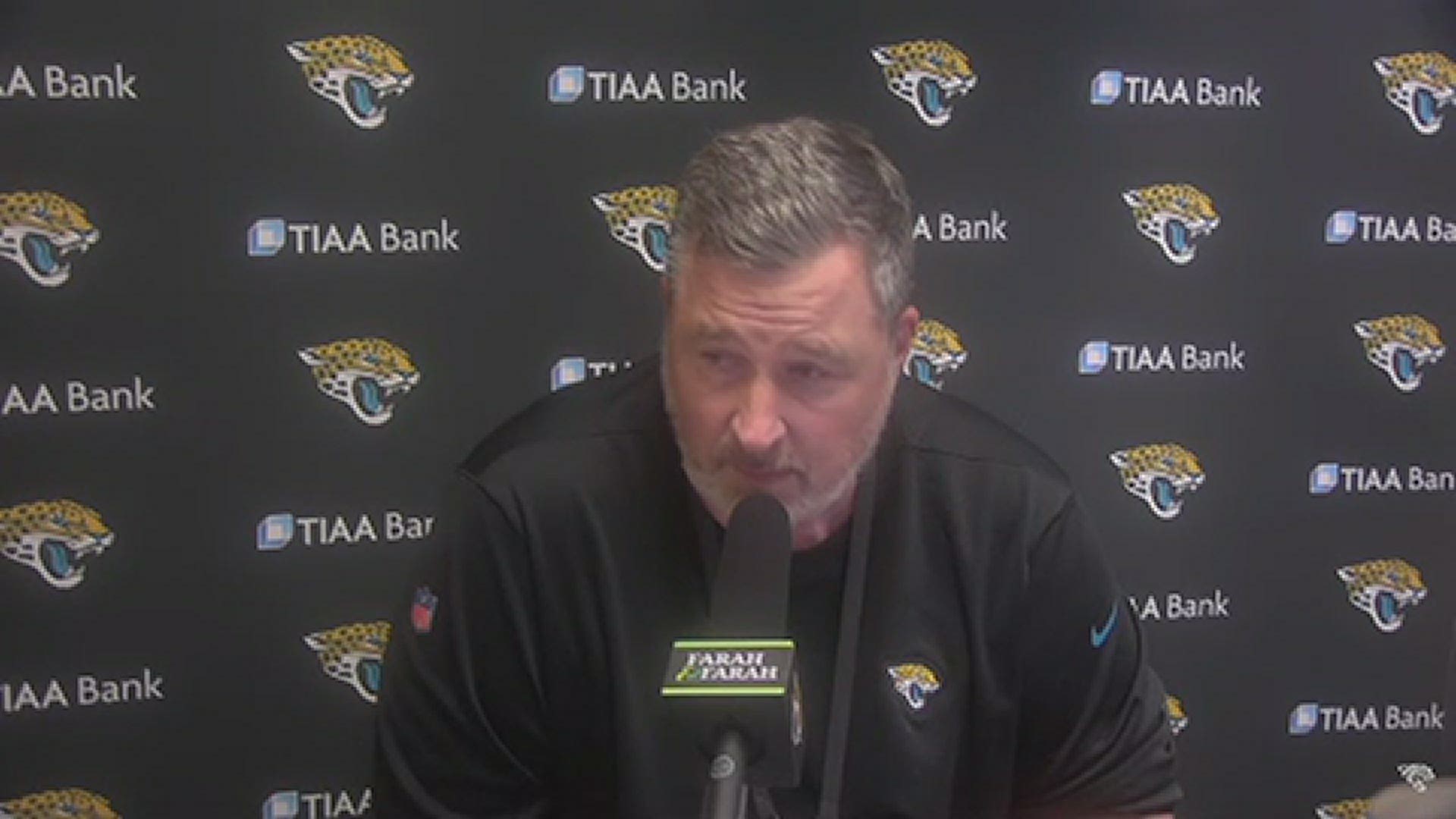 Didn’t even need my morning coffee. Doug had me ready to run through a brick wall at 9:57 a.m.

But how will his team respond to this newfound approach? Are they even paying attention to their head coach?

If he does any of these five “crazy” things, they may have no choice.

I had already come to this conclusion long before it was reported Gardner Minshew would miss time with fractures in his throwing hand.

Shenault has seen time all over the field, including at the wildcat. That’s a nice start – especially considering he had 5 touchdowns on 17 direct snaps his sophomore year at the University of Colorado – and we should see more of it. But how about we also let Shenault let it rip? James Robinson already got his shot on that failed, fourth-down conversion in Houston!

“I definitely wanted to throw the ball, but they never let me,” Shenault told the Los Angeles Times in April of his time with the Buffs. “Because I can throw. Being in practice, that’s all we do, throwing the ball around to each other. We throw the ball 40, 50 yards, so throwing a deep pass was nothing.”

Learn from Colorado’s mistakes, Jaguars. They never won more than five games while Shenault was there (but don’t win enough games to miss out on a top quarterback in this year’s Draft).

Marrone and offensive coordinator Jay Gruden have both noted at various times the last few weeks that a nagging hamstring injury was keeping Shenault limited in practice and holding them back from adding new wrinkles to the offense. After the bye week, he should be rested.

Shenault is the most naturally gifted athlete on this roster. I’d say line him up at safety but that may be too crazy (or is it?)

2. Go for two after every touchdown

It’s nothing against Josh Lambo, a no-doubt, Top-5 kicker in the NFL when healthy.

It’s that the Jaguars need all the points they can get.

Various outlets estimate the success rate of a two-point conversion is somewhere between 40 and 50 percent. When the extra point moved from the two-yard line to the 15-yard line in 2015, the success rate of the extra point drastically dropped (maybe Aldrick Rosas and Brandon Wright would’ve had better luck from the two-yard line?). The Jaguars are 2-of-5 on two-point conversions in 2020, but four of those attempts (and both successful tries) were against the Chargers last week. Can the momentum carry over?

Josh Lambo’s squib kick against the Titans Week Two was disastrous and proved to be game-changing (and possibly season-changing, given Lambo’s injury that sprung up in the days that followed).

But how much harm can a few more onside kicks do?

Because much like points: the Jaguars need as many possessions as they can get. Between trying to keep their porous, 31st ranked defense off the field to the offense’s two total, first quarter touchdowns through seven games, the Jaguars need some kind of spark.

Unlike two-point conversions, the numbers here historically aren’t great. In 2018, 52 onside kicks were attempted across the NFL; only four were successful. That number dropped from eight-percent to six-percent in 2019. Teams are 0-104 when needing an onside kick to win a game the last two years.

But it’s 2020. The Cowboys have already proven this year is different. Let’s get crazy.

It’s a given that Shenault, Robinson, and fifth-rounder Collin Johnson should be getting the ball more. They’re not just talented rookies: they’re among the best playmakers on the entire team. There’s a reason Leonard Fournette was sent packing and Dede Westbrook was the odd-man-out in the wide receiver room.

But how about fourth-rounder Shaq Quarterman? (0 defensive snaps in 2020)

Heck, heralded undrafted free agent Luq Barcoo – who the Jaguars’ paid a record-setting, UDFA price for – has yet to see the field.

Fifth-rounder Daniel Thomas has proven to be a special teams ace, including forcing and recovering a fumble for a score against the Chargers last week. He has only been given 33 snaps on defense.

Sixth-rounder Tyler Davis was drafted as a project, but he has been forced into action with Tyler Eifert plagued by injuries. Yet he’s played just 40 snaps on offense. What happened to all the 12 personnel Jay Gruden was looking to run? (FWIW, undrafted rookie Ben Ellefson has played 49 snaps at tight end. He is also worth a further look.)

These are just the fringe guys. There’s also undrafted rookie Doug Costin (22% of defensive snaps) and DaVon Hamilton (more than 50%, and more coming with Abry Jones on the shelf).

I’d rather see even more of Hamilton at defensive tackle than Taven Bryan, who has currently played the most downs of any defensive lineman. We know what Taven can do. We’ve been waiting for the “jump” for three years. Let’s move on. Free agent signee Adam Gotsis (44% of snaps) is a great story, but is it wise to give the fourth-year defensive end snaps over Costin?

Whoever is making the personnel decisions next year needs to know who they have in the building before they can look elsewhere. That person may not be at practice right now. They may not be in Jacksonville. Let these young guys at least get something on tape. Help make Jacksonville [potentially] a destination for a future GM or head coach!

Note: reading it back now, a lot of the players I just mentioned are on the defensive side of the ball. Which brings me to …

Doug Marrone said two weeks ago that “as long as he is head coach,” Wash will be the defensive coordinator.

One week later, he said he wanted to “do crazy sh*t.” Going back on that vow would be more than crazy: it would be borderline sane!

Look, I tried to come up with something more ~creative~ for this final bullet point. But I am sick of watching this franchise try to fit circle pegs into square holes.

It has derailed any hope Taven Bryan had of a career. It certainly stunted Dawuane Smoot’s growth as a pass rusher. And Wash was the Defensive Line Coach before being promoted! “Well, now they can play and teach every position along the line!” is a nice way of admitting you can’t adapt to the players you’ve been handed. Now, K’Lavon Chaisson is on his way to being Wash’s next victim. After hardly ever playing with his hand in the dirt at LSU (and general manager Dave Caldwell suggesting he would assume a similar role in a 3-4 in Jacksonville), the Jaguars seem hell-bent on making a defensive end out of Chaisson one way or the other. He has 256 snaps, third-most on the defensive line. He has one sack and one tackle for loss.

For context: last year at LSU, Chaisson played 600 snaps. He had 6.5 sacks and 13.5 TFL. Sure, there’s a transition in going from college to the pro’s. But throwing an entirely new position at a first-round pick who you need to perform right-away is anti-productive.

But: it’s Wash’s way or the highway. And don’t be deceived: this is not the Bill Belichick, “do-your-job” approach. Belichick adapts to the personnel. Belichick knows a square from a circle in the first place.

Doug Marrone wants to “do crazy sh*t.” But his defensive scheme is already insane.

Because the definition of insanity is doing the same thing over and over again and expecting a different result.