It's the Monday Morning After, and the Jaguars are drafting Trevor Lawrence. Now, who will lead him? 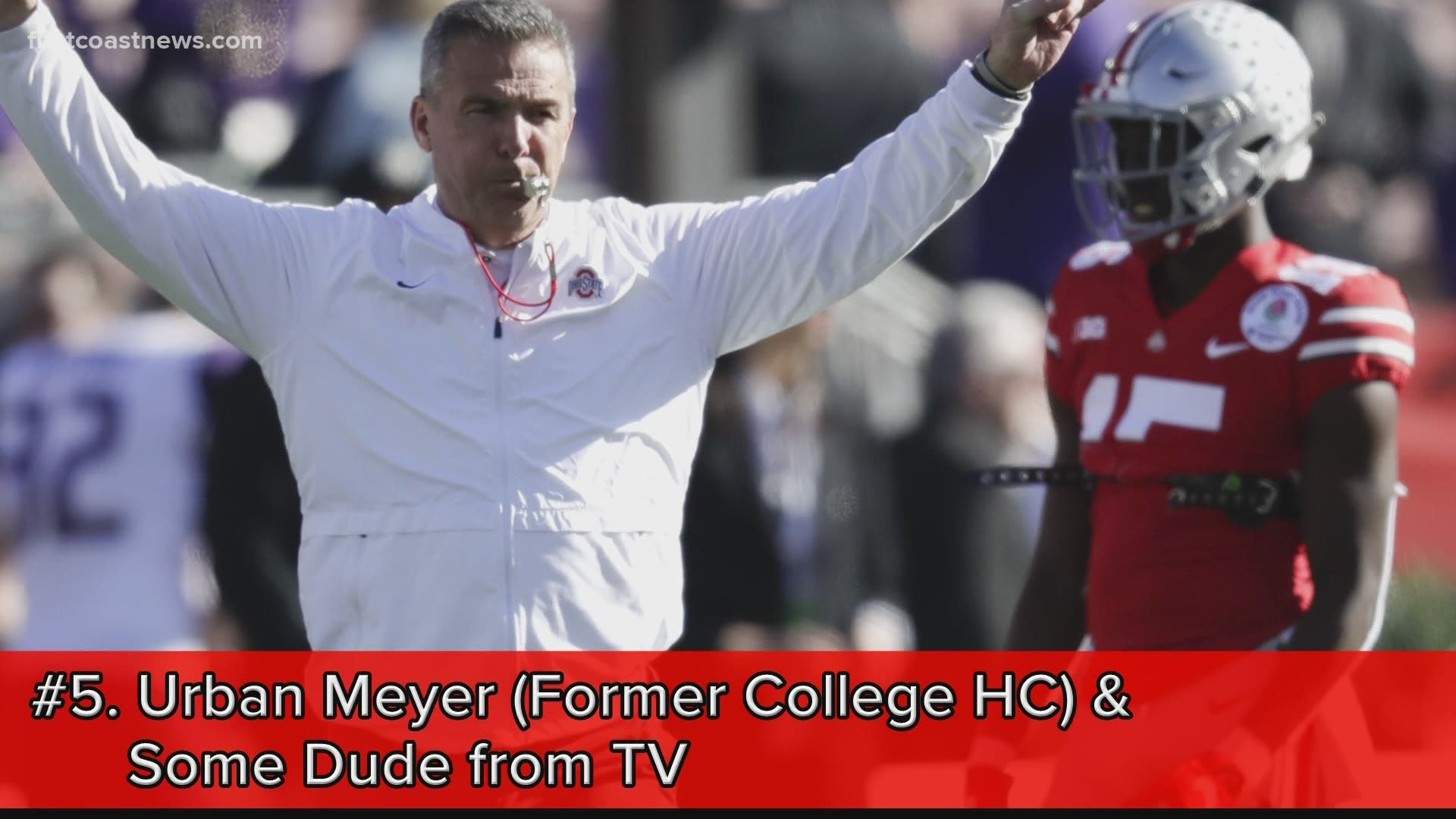 I will once again preface any talk of future Jacksonville Jaguars teams by saying this:

I love Doug Marrone. Even more so after the grace he has shown throughout this topsy-turvy, soul-sucking year. Players play hard for him. He always takes the blame, even when there’s no need to do so.

But Doug Marrone will not be the Jacksonville Jaguars head coach next season.

Of late, though, many general managers are hired under the pretense that they will be bringing with them a specific, head coach. A package deal. We saw it last off-season with the Cleveland Browns (HC Kevin Stefanski and GM Andrew Berry). In an unorthodox sort of way, we saw it with the San Francisco 49ers in 2017 (HC Kyle Shanahan and GM John Lynch). Two years later, the 49ers played in the Super Bowl. Despite their loss to the Jets Sunday, the Browns appear poised to head to the postseason for the first time since 2002.

And neither of those duos took over a franchise that was selecting Trevor Lawrence in that upcoming April’s NFL Draft.

They were rumored to be the runner-up to the Stefanski/Berry ticket in Cleveland last season. Saleh previously worked for the Jaguars. He and Dodds were a part of the Legion of Boom Seattle Seahawks. Detroit Lions Reddit already has a thread up-and-running about the possibility of their arrival. If the Jaguars can convince their AFC South rivals the Colts to allow Dodds to interview (a big "if"), this one makes too much sense.

I detailed Dodds’ credentials in a previous column. He is a football guy. He’s a culture builder without all the song and dance (sorry, Nick Foles).

Saleh was a hot name on the head coaching market last year – with many folks wondering if he’d be a candidate for the Jaguars if they had an opening. Sure, he’s not a quarterback whisperer like Sean McVay. But with more than half of his Day One starters on the season-ending Injured Reserve list, Saleh has held the likes of Kyler Murray to 12 points and defeated McVay’s Rams twice this year. His patch-work squad is ranked FIFTH in total defense. This is arguably a better coaching job than his unit that made last year’s Super Bowl.

With that said, Saleh is a defensive coordinator. He will need to bring along his own Kyle Shanahan or McVay, “wunderkind” to coach the offense. I believe that the Jaguars’ ascension to the No. 1 pick (and Trevor Lawrence) helps Saleh's candidacy. As much as Lawrence will also need someone to develop him, it probably won’t need to be as hands-on as a Trey Lance or Zach Wilson project.

... my only concern is Saleh keeps Todd Wash on as a water boy.

Because no one circles the wagon like the Buffalo Bills.

Daboll’s trajectory is curious. He is from the Patriots coaching tree. He has been an offensive coordinator for four different teams (five counting the University of Alabama). His work this season transforming Josh Allen and the Bills into the NFL’s fifth-ranked offense is nothing short of incredible.

But, prior to his tenure in Buffalo, none of his offenses finished better than 20th in the league. Even with the always-steady Kansas City Chiefs in 2012, KC went 2-14, tied for the worst mark in franchise history. Some of that can be attributed to the talent he was handed. And it’s why the work he’s done with the Bills over the last two years – not a treasure of riches, at least not when he initially arrived – is impressive.

Some of that later success can also be attributed to Dawson.

The former Notre Dame and Kansas City Chiefs wide receiver has helped uncover the likes of Allen, Dawson Knox, and Gabriel Davis. He previously served as the Titans’ VP of Football Operations. He’s also had more than a half-dozen GM interviews in the past. With the Bills’ 2020 success, he’ll be a hot name on the market – and would have the opportunity to team-up with another member of Bills Mafia, if he so chooses.

Because I won’t trust Shad Khan’s hiring process until it proves doubters like me wrong.

Yes, the New England Patriots have been a model of consistency over the last 20 years. McDaniels and Ziegler are two of their most dedicated soldiers. They are life-long friends. McDaniels previously interviewed for the Jaguars’ head coaching vacancy. He also spurred the Colts at the 11th hour to return to the mother-ship in Foxborough, causing many to wonder if he’s yet another flight risk from the Belichick Tree.

This duo also literally went to and played football for the same school as the now-fired Dave Caldwell and former Director of Pro Personnel Chris Polian.

As the Tom Coughlin hire proved: who says you can’t go home, right?

Look, all my skepticism aside (chalk it up to my New Jersey-upbringing – also because I couldn’t possibly give you a column of just unicorns and rainbows), these guys are proven winners. McDaniels will forever have “I coached Tom Brady for almost 20 years” on his resume. Ziegler actually started as a high school coach before old buddy McDaniels brought him to Denver in 2009 as a scout. His background is in scouting – in my opinion, an underrated trait in a general manager.

There’s a third member to that trio of John Carroll-turned-Patriots stand-out’s: Patriots Director of Player Personnel Nick Caserio. However, as this month’s Sports Illustrated, deep-dive into the Houston Texans revealed (and which you should read, if you haven’t), Caserio appears destined to reunite with another old, Patriots buddy in Jack Easterby.

If you had told me when I first started researching for this column that this would be the duo I’d be most excited to write about, I’d have called you crazy.

Then, I read this illuminating profile from The Athletic on Kelly. Read it. Then try to root against that guy.

At the end of the day (and this ties into our final duo as well), Shad Khan has a cultural decision to make. Either hire a head coach with presumed, ultimate power (more on that in a second) or hire a general manager who will stabilize this front office with tough, but tender love.

That’s what Kelly would bring.

Like Ziegler (and Dodds), he is a scout by trade. He’s the one monitoring Draft boards, pushing to draft the likes of David Montgomery (1,000 yards this year behind a make-shift offensive line), while also pushing to sign free agents like Danny Trevathan (100 tackles this year). He is from Florida. More importantly, as a former player himself, he makes it a point to be at practice. To bridge the gap between the locker room and the Front Office. It’s been one year, but that NFLPA statement and grievances still hang like a Scarlet Letter upon the Jaguars organization.

Kelly is also 40 years old. That’s where Caldwell comes in.

He’s 65. He’s been a head coach before. He’s also developed and worked with the likes of Peyton Manning, [elite 2013] Joe Flacco, and Matthew Stafford. He will know how to work with another prodigal talent like Lawrence.

I still believe it would be critical for Kelly to hire an up-and-coming developer/play-caller as his offensive coordinator. But he would be a steady hand for many in the organization – from Lawrence to Champ Kelly himself.

So originally I had this as “Urban Meyer and John Dorsey (former Browns GM).” Then I read about the near-power struggle that was in Cleveland, and it reminded me that a, that pairing would be doomed and b, why I’m even giving Urbs some love in this column in the first place.

Because if the Jaguars were to hire Urban Meyer, he becomes the “all-powerful” head coach akin to Belichick or Andy Reid. He’s wearing the pants in the relationship, whether his title says it or not.

It’s certainly an option Shad Khan could take – he tried to give Doug Marrone more power this season, after all. But that power would then need to be respected. If Meyer is to risk his always-in-question health and make his first foray into the NFL, he is going to want total control – inexperience in the NFL be damned.

This is also the only option where I see ESPN’s Louis Riddick or NFL Network’s Daniel Jeremiah fitting in.

I previously explored Jeremiah’s candidacy. He’s also great on TV. He’s also a scout by trade. And that’s it. He has never held a leadership position in a Front Office. Counterpoint: neither had John Lynch, and the San Francisco 49ers have thrived the last three years. Lynch has the offensive-wizard Shanahan calling the shots, so maybe a similar trajectory could be said for a Jeremiah/Meyer pairing… but it is, like Riddick, also a gamble.

There’s an outside chance that maybe, just maybe the Jaguars can convince the Colts to let Dodds interview for their open position.

Convince the Tennessee Titans to let two of their premier talents interview with their division rivals? Fat chance.

In my opinion, if Shad Khan is looking to cherry-pick from a model of stability, the first place he should go is Baltimore. I outlined Hortiz’s candidacy in a previous column. He’s a numbers guy, like Tony Khan.

The offensive play-calling prodigy Brady is, too.

With their Draft position still up in the air, I believe there’s a chance Carolina lands another one of the premier quarterbacks in this year’s Draft. As much as coaching Lawrence would be, I believe Brady would love the challenge of crafting an offense around a Zach Wilson or Trey Lance more.

The second model of stability I’d cherry-pick from: the Kansas City Chiefs.

Borgonzi (more here) is a lifer and has a proven-track record. Bieniemy is the voice in Patrick Mahomes’ head every Sunday.

It’s yet to be seen what they can do without Andy Reid, but I mean… this is a risk worth taking.

I think the former Browns assistant GM (and son of former Green Bay Packers’ GM Ron Wolf) is the biggest wild-card. He could end up like Jaguars’ interim GM Trent Baalke, taking another position in the Jaguars’ front office to support an old friend (Dorsey, for instance). He’s also currently a consultant for the Patriots’ Front Office, so maybe the McDaniels/Ziegler ticket brings him along for some sage, veteran mentorship. With that said, he is only 38 – and despite 16 years of executive experience, he has never served as a general manager.

Much like the University of Alabama football team, the New England Patriots have tended to serve as a “image rehabilitation center” the last few years, a place where coaches and executives can re-discover their talents before being unleashed back onto the football world. A place where they can wait for the right opportunity to come along.

I believe that’s what Wolf is doing this year. And Jacksonville is, according to many, the best opportunity available this off-season.