Five takeaways from Jaguars' 33-30 loss to the Titans

It's the "Monday Morning After" ... and the Jaguars' pass rush needs help 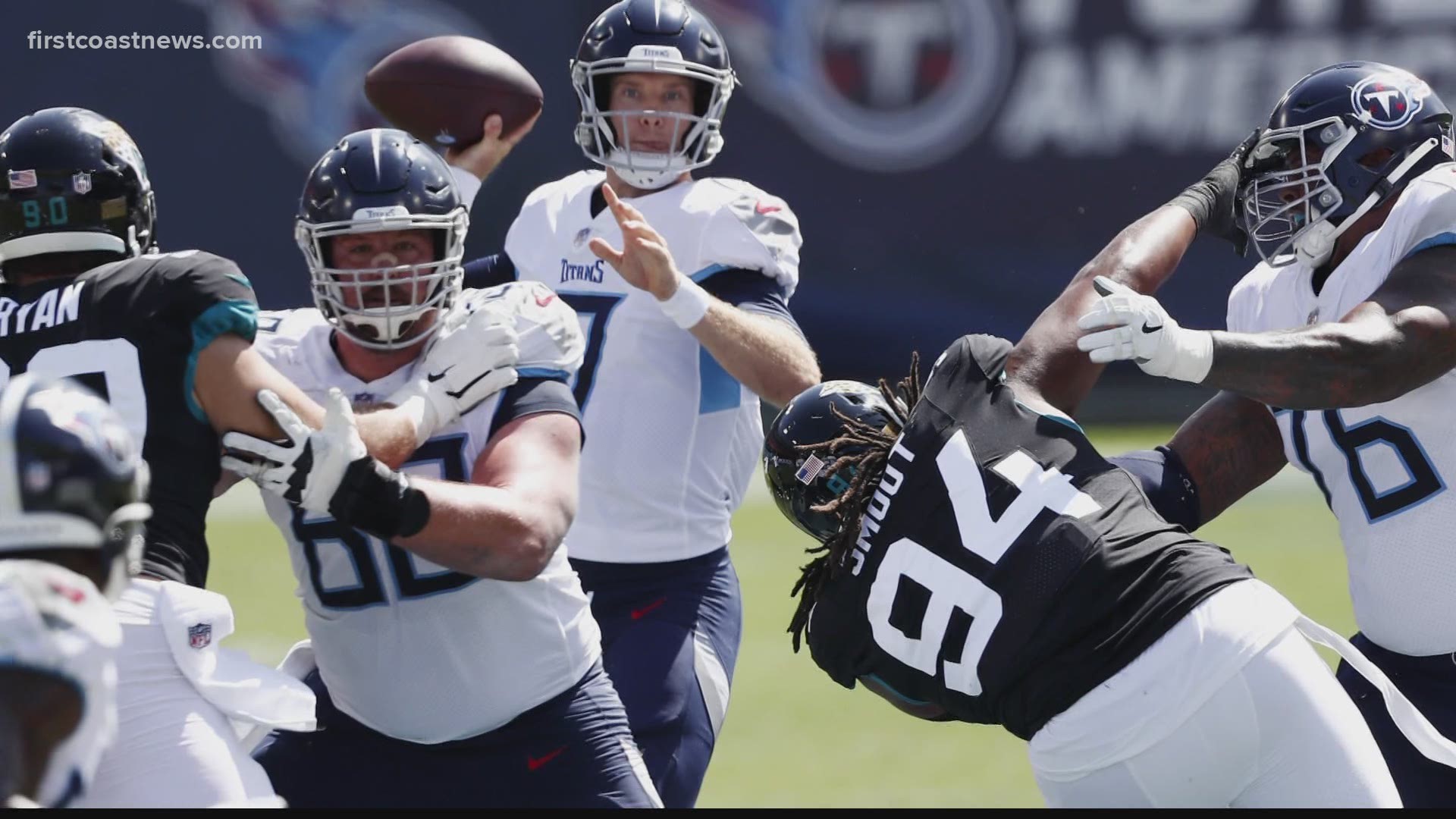 The streak continues. The Jacksonville Jaguars still haven't won in Nashville against their heated rivals, the Tennessee Titans, since 2013.

But this year's iteration was different.

Sure, the Jaguars found themselves in a 14-0 hole as they so often have at Nissan Stadium (and many games over the last 24 months). But every time the Titans punched, the Jaguars punched right back.

"I think any time we get in those situations we don't hit panic mode, we don't start pointing fingers," Gardner Minshew said.

"In years past -- when we'd get down -- it's kind of like a snowball effect," D.J. Chark said of those 14-0 holes that so often spiraled out of control. "But [the defense] knows even if the [other] team does score, we as an offense have the potential to go score, too."

Against the reigning AFC runner-up's, against the league's reigning rushing champion, against the team that seemingly always gives them fits -- the Jaguars, the youngest team in the NFL, were never out of this one.

With all the sunshine and rainbows: how did they still manage to lose this game?

1. The Offense is not the problem

Self-admittedly: I have only lived in Jacksonville for a little over two years. But from every life-long fan I've spoken to or follow on Twitter: this is the most active and non-anemic offense Duval County has seen in a close to a decade. Jay Gruden's offense is entertaining. It scores a lot. Win or lose, that alone is sure to put butts in the seats and eyeballs on the silver screen.

The stats aren't too shabby either. Sure, we're only two weeks into the season, but check out the numbers:

- The Jaguars completed 71.4% of their third-downs Sunday. That's their highest mark since their Week Two win over the New England Patriots in 2018. They were also successful on their lone fourth-down attempt.

- Ten different receivers were targeted Sunday (eight had catches) and six of them had at least 35 receiving yards.

- Dating back to last season, Minshew is the first quarterback in franchise history to throw three touchdowns in three consecutive games.

Those last two put into perspective how truly mediocre the Jaguars' offense has been throughout most of its 26 years of existence; the bar wasn't set that high to begin with. But then you compare what Gardner Minshew and company have done these first two weeks compared to the rest of the league:

- Gardner Minshew is tied for second in most touchdowns thrown (6) along with Aaron Rodgers, Matt Ryan, Ryan Tannehill, and the Bills' Josh Allen. Russell Wilson leads all quarterbacks with eight.

- Through Sunday Night Football, both Minshew (339 yards) and Robinson (102 yards) were top-five in the league for their respective, Week Two performances

- Laviska Shenault had 37 rushing yards and 35 receiving yards. When was the last time you saw that from a wide receiver, let alone a Jacksonville Jaguar?

Sure, you can say that Gardner Minshew's two interceptions (both deflections) changed the trajectory of this game. But once again: this Jaguars offense didn't fold in the face of a 14-0 deficit. That's new.

2. Pass rush is a problem

The Jaguars have one sack through two games.

Even when they weren't at their 2017 Sacksonville levels: ESPN still had the Jaguars ranked seventh in the NFL in 2019 in Pass Rush Win Rate Percentage at 48 percent.

They haven't updated that stat yet in 2020, but when they do, it won't be pretty unless Todd Wash changes things up. He doesn't have the personnel he had in 2019, let alone 2017. Rushing more than four may be a necessity.

I, too, initially (and semi still do) blame this on the opposing offensive lines they've faced. The Colts have arguably the strongest offensive line in the National Football League. Andrew Luck and Jacoby Brissett's lack of sacks over the last few years indicate as such (both were second-best only to the New Orleans Saints in 2018 and 2019). As for the Titans, as Pro Football Focus points out: no one was better at protecting their quarterback in 2019 when he held the ball for 2.5 seconds or more. Not surprisingly, Ryan Tannehill held the ball longer than any other quarterback in 2019.

He averaged 3.03 seconds Sunday, fifth-best in the league. And again, he was sacked once and hit just four times.

"I think this game we was probably a little locked in a little bit too into the run, kind of bared our eyes and kind of worked out late to work against the pass," defensive tackle Abry Jones said. "I think our DBs do a good job, but we just can't leave them out there covering for about six to ten seconds, so we've got to do a better job getting off those blocks."

If it makes Jaguars fans feel a bit better: their opponent Thursday night, the Miami Dolphins, gave their quarterback Ryan Fitzpatrick the shortest time to throw, just 2.19 seconds, in Week Two across the league. Maybe that's just what the doctor ordered.

I'm not worried about Josh Lambo. I don't think anyone in Duval County is.

Before Sunday, he had not missed an extra point since October 27, 2019. That was the only extra point he missed all of last year. He has never missed a field goal at TIAA Bank Field.

The squib kick was weird. I wouldn't dwell on it. Doug Marrone didn't even really seem to know what happened when asked postgame ("it's just one of those things that it just wasn't executed right. It wasn't like trying to make something happen or anything like that.")

Ditto to Logan Cooke's short punt on the final drive of the game. He is averaging 43.2 yards per punt in 2020. Is that in the bottom half of the league? Sure: but he's only punted five times all year. Washington's punter has 13 punts, almost three times that.

Did these special teams miscues cost the Jaguars the game? Possibly -- the Jaguars certainly would like that Titans field goal just before halftime back. But it's not going to happen every week.

If anything, rookie Chris Claybrooks mishandling a pair of punts is the bigger cause for concern. Fortunately, both went out of bounds and remained Jaguars ball. That's now the third time in two games the speedy rookie has misplayed a return though. He looked good in spot duty for D.J. Hayden late in the game at corner, so Claybrooks is certainly worth the spot on the gameday roster. But that's the phase of special teams most in danger of becoming a trend, not Lambo or Cooke.

4. Penalties hurt, but still not as many

(That wasn't defensive pass interference on Myles Jack, let's just get that out there first)

"A lot of us don't believe that was really a pass interference, but the ref is going to make his call," Abry Jones said.

He also said this:

"I think if we cut out half of those penalties I think it would have been a much better game."

Sure, subtract Jack's DPI and another on safety Josh Jones, and that's 10 points off the board for the Titans. Both drives would've stalled if those flags weren't thrown.

But the Jaguars only had eight penalties Sunday. That's two more than last week and right around their league-leading average in 2019.

It could've been worse.

The Titans were baiting the Jaguars defensive line offsides throughout the first half, particularly on their third drive of the game. Tannehill shouted calls. Titans offensive linemen pointed fingers and made noises. They knew this was the Jaguars, the yellow flag-inducing, youngest team in the league. And yet, it was Tennessee that had three false starts in a span of four snaps on that drive.

The only defensive linemen that succumbed at the line of scrimmage to the penalty flag were Taven Bryan (twice) and Adam Gotsis. And on the offensive side of the ball, the only penalty the Jaguars had to their name was one false start.

Reminder that there were 12 rookies on the field for the Jaguars and no preseason games for this new team to gel. It's not what you want, but it's impressive.

5. For the most part, Jaguars stayed healthy

While starting center and captain Brandon Linder was helped off the field with a knee injury and no further update has been given at the time of this writing: it could've been a lot worse for the Jaguars in the injury department Sunday. Just look at the number of NFL stars that went down in Week Two:

Eighth-year veteran Tyler Shatley performed well in Linder's absence. Minshew was sacked twice on Sunday, and the first was largely of his own doing (the second was a combination of Minshew scrambling and the line evaporating). Going up against the likes of Jadeveon Clowney, Harold Landry, and Jeffery Simmons -- not too shabby. Last year was Linder's first time playing all 16 games, too. The Jaguars have become accustomed to seeing Shatley step in from time to time. But as we saw in 2018 when Cam Robinson... and then Linder... and then Andrew Norwell went down injury, Jacksonville cannot let injuries pile up along the line.

Even with the struggling Dolphins and Bengals on deck.