Dynamite Trevor Lawrence headlines, while his wide receivers dazzle in front of fans for the first time. Sights and sounds from Thursday at Jaguars Training Camp. 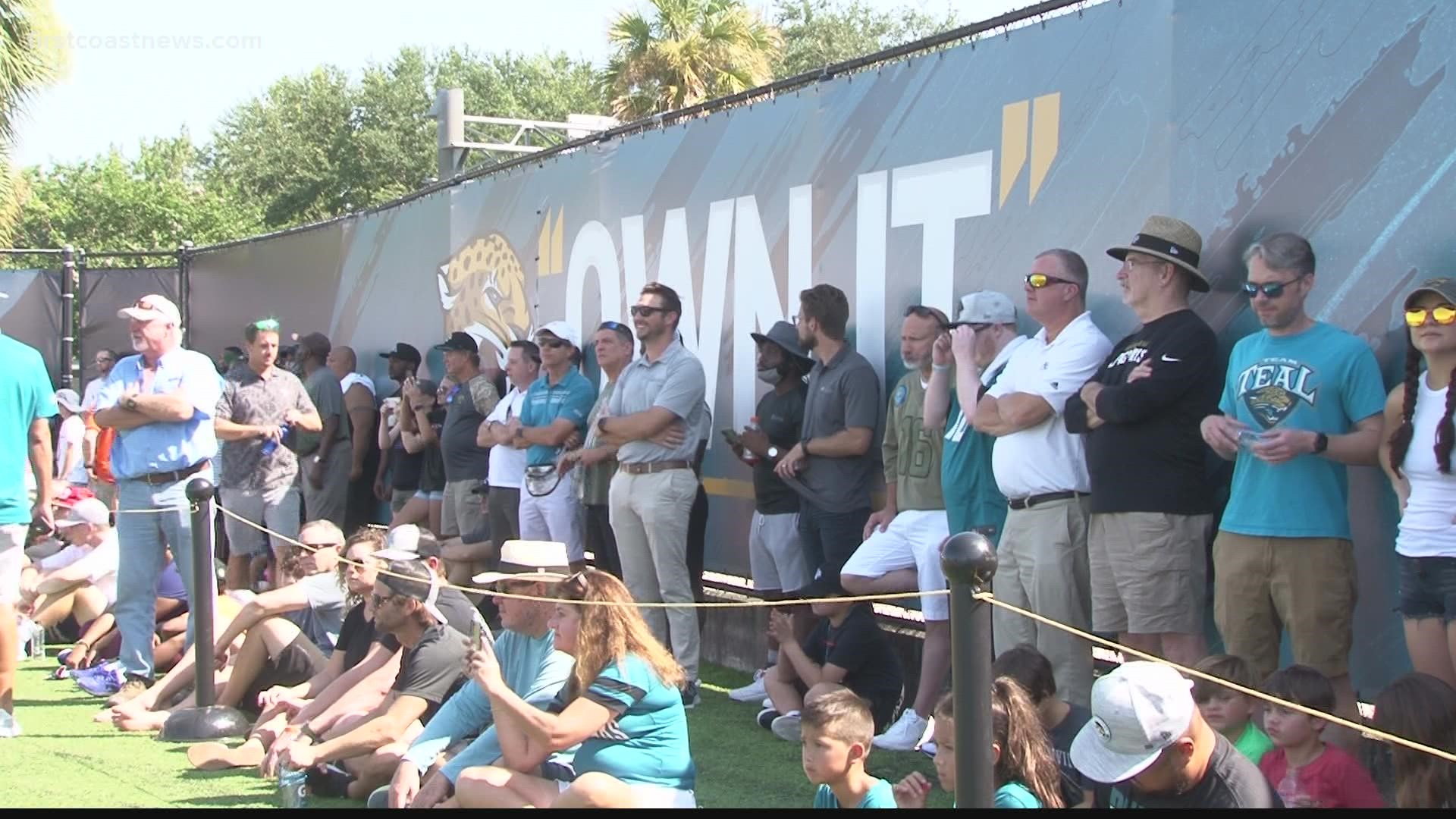 For the first time in two years, fans were invited to the Dream Finders Home Practice Complex at TIAA Bank Field. They got to see their new franchise quarterback, Trevor Lawrence, for the first time.

And boy, did the rookie put on a show.

Maybe it's not a QB Competition after all

Lawrence was 17 of 20 Thursday, with multiple, highlight reel deep balls to the likes of Marvin Jones Jr. and Laviska Shenault. As offensive coordinator Darrell Bevell detailed after practice, the Jaguars coaching staff continues to put Lawrence in uncomfortable situations and present him new challenges. The No. 1 overall pick continues to answer the bell -- and it showed Thursday. The Jaguars team periods featured multiple scenarios. Third and short. Third and long. Seven-on-seven. Lawrence succeeded in all of them. Flushed from the pocket on third-and-short, he dumped the ball off to tight end Chris Manhertz for a first-down. Lawrence found second-year wide receiver Laviska Shenault everywhere, ranging from in the slot through traffic to down the sideline for a 20-yard plus grab -- despite double coverage. He found his old college teammate, Travis Etienne, more than once on a quick check-down on third-down (more on Etienne, the Jaguars other first round pick in just a second).

When I tell you Trevor has made every throw you possibly can on the length of a football field today, I am not exaggerating.

It’s a clinic. Should’ve brought HS’ers out to teach them 🤣#Jaguars | @FCN2go

Fans now know what the media has hyped up for months behind close doors. The kid is legit.

Meanwhile, after a solid opening day of Camp Wednesday, both veteran quarterbacks Gardner Minshew and C.J. Beathard struggled. After running mostly with the first-team, Minshew ran primarily with the second-team Thursday. He was 9 of 13 during team drills, but did show a strong connection with the Jaguars' tight ends, connecting with rookie Luke Farrell on the run for a strong first-down late in the day. Beathard was 6 of 13 and became the first quarterback to be intercepted this Training Camp, courtesy a diving, one-handed catch by Sidney Jones; the wide receiver did fall down on this play (sorry to my Iowa fans for not specifically stating this in an earlier tweet). Beathard was also plagued by a drop by Collin Johnson along the sideline. Quarterback Jake Luton, back from the Reserve/COVID-19 List, did not see reps during the team periods.

Yes, head coach Urban Meyer probably won't anoint Lawrence the starter until September, possibly late-August. Minshew and perhaps even Beathard will get more reps with the first-team offense. But if Thursday was any indication, Lawrence is QB1. Everything detailed yesterday about his multiple, 30-yard-plus bombs was on display again. Safe to say: it's here to say.

Perhaps it was having Lawrence under center, perhaps it was the prescience of fans: multiple Jaguars offensive players had their best day of practice since OTAs began in May.

Free agent signee Marvin Jones Jr. caught a 40-yard touchdown from Lawrence, and almost had a second later on in team drills. Jones, entering his tenth year, has instantly changed the depth of the Jaguars Wide Receiver Room both on and off the field.

"To have Marv, a guy who's a veteran in this league, who's done some really nice things, for a younger receiver room? He can help them in terms of how he takes care of his body, what his preparation is like, help get them together for offseason stuff," offensive coordinator Darrell Bevell said Thursday. "When Marv steps in the receiver room and they might have a question, he's able to give them more of the nuance."

Speaking of that younger receiving room: Laviska Shenault has become a fantasy football darling and is being frequently regarded as a prime break-out candidate league wide. He showcased his versatility Thursday, as the Jaguars used him in the slot and as the X-receiver down the sideline.

D.J. Chark had a quieter day Thursday, but did haul in a laser on third-down from Lawrence between two defenders. The wide receiver whose number was called most frequently Thursday was actually Laquon Treadwell, the former Minnesota Vikings first-round pick, who hauled in passes from all three quarterbacks at different times during practice. At 6'2'', 215 lbs, he is the muscular, tall receiver that Meyer has stated the Jaguars need.

The next player is strategically being placed last in this section because he blends the wide receiver and running back position: Travis Etienne. The No. 25 overall pick in April's NFL Draft fumbled during team drills on Wednesday. He got the first reps in the first 11-on-11 period Thursday and answered the bell, immediately showcasing his elusiveness and quick burst on back-to-back runs, with the Jaguars' fans responding accordingly. It's something so little but it spoke volumes: after a slip-up Wednesday, Etienne wanted the ball right back in his hands Thursday. Not only did he make a play, but his coaches trusted him to do so. Etienne lined up wide on third down, took hand-offs out of the backfield, and caught a handful of check-downs. He's going to be more than a third-down back. Which brings me to...

Unless it's Derrick Henry, it is unsustainable to have one running back carry the ball 70-plus percent of the time in the National Football League. I know it. You know it. James Robinson, who had 71-percent of the Jaguars' carries in 2020, also knows it!

"We always talk about having fresh legs coming out. I know that, once the season comes, having those fresh legs is going to help out a lot," the second-year running back said Thursday.

So for those who are concerned that Etienne was drafted to replace Robinson: think again.

"This game is built that way," Bevell said of a more, running back-by-committee approach. "I know Coach Meyer believes that: that you run the ball first. We want to be able to exert our will on our own opponent, and that helps us do things in the pass game. To have a number of backs back there? I think those guys are looking really good.

"[James] is very physical. I love what he can do when he has the ball in his hands. He's going to get his fair share of doing that."

The other running backs on the Jaguars' 90-man roster -- Carlos Hyde, Nathan Cottrell, Dare Ogunbowale, and Devine Ozigbo -- also saw reps during team drills today. All the running backs also participated in multiple pass-catching drills during the position portion of practice, something Bevell explains in the video below.

"I think about how I could lose my job any second. I could get cut, [so] I just come out and work."

- On Gardner Minshew's first rep with the second-team offensive line, I intentionally focused on the O-Line. Josh Allen beat Will Richardson on the right side almost instantly. Linebacker Dakota Allen (more on him below) blitzed through the middle of the line past Tyler Shatley. Roy Robertson-Harris also eventually made his way through. If not for the no-contact rule, Minshew's pass attempt never would have gotten off the ground (it was incomplete anyways). On the next rep, Richardson jumped off-sides. Later, linebacker Shaq Quarterman broke through for a would-be sack. That's when offensive line coach George Warhop started yelling. It's still early, but it's clear there's some sort of disconnect in this second group.

- Warhop was not the only vocal coach on Thursday. Wide receivers coach Sanjay Lal was not afraid to call out both Shenault and Pharoh Cooper during team drills. It was the first time we've seen the first-year position coach that heated since he came aboard in Jacksonville. But it kept with Meyer's message to the team on the eve of Training Camp: no excuses.

- Sidney Jones had the interception, but defensive back Brandon Rusnack also had a nice pass break-up of Beathard's pass to Jalen Camp during the team period.

- Dakota Allen was on the field quite often Thursday, both in a blitzing linebacker role and also as the end in a 3-4 scheme. Allen appeared in 13 games with 14 tackles for Jacksonville in 2020.

- It was interesting to see Jarrod Wilson and Andrew Wingard, not Rayshawn Jenkins and Josh Jones/Daniel Thomas, take the first reps during team drills. Add in third-rounder Andre Cisco, who has returned from an ACL tear and has been full-go for the Jaguars, and what was a position of weakness for the Jaguars when Meyer arrived is now a position of strength.

- With the signing of Shaq Griffin, it appears fourth-year defensive back Tre Herndon will slide to nickel corner for good. While defenders cannot press during these first few, acclimation days of Camp, Herndon provided sound, would-be pressure along the line and into the backfield.

- Tight end James O'Shaughnessy worked off to the side Thursday. It is unknown why he was not a full participant in practice, but the sixth-year pro did lift weights in the Jaguars' outdoor weightlifting site.

- Quarterback Jake Luton and defensive back Luq Barcoo were officially activated off the Reserve/COVID-19 List. Defensive backs C.J. Henderson and Chris Claybrooks remain on the List.

The Jaguars will be back on the practice field on Friday morning for the second of six open practices to fans.

Day 2: #Jaguars Training Camp! I got so energized seeing the return of @jaguars fans to training camp.@FCN2go #teamsideline pic.twitter.com/JiM2h1mfgC