Trevor Lawrence has an up-and-down Friday, Walker Little and Josh Hammond shine, and other notes from the Jaguars' third practice of the 2021 season. 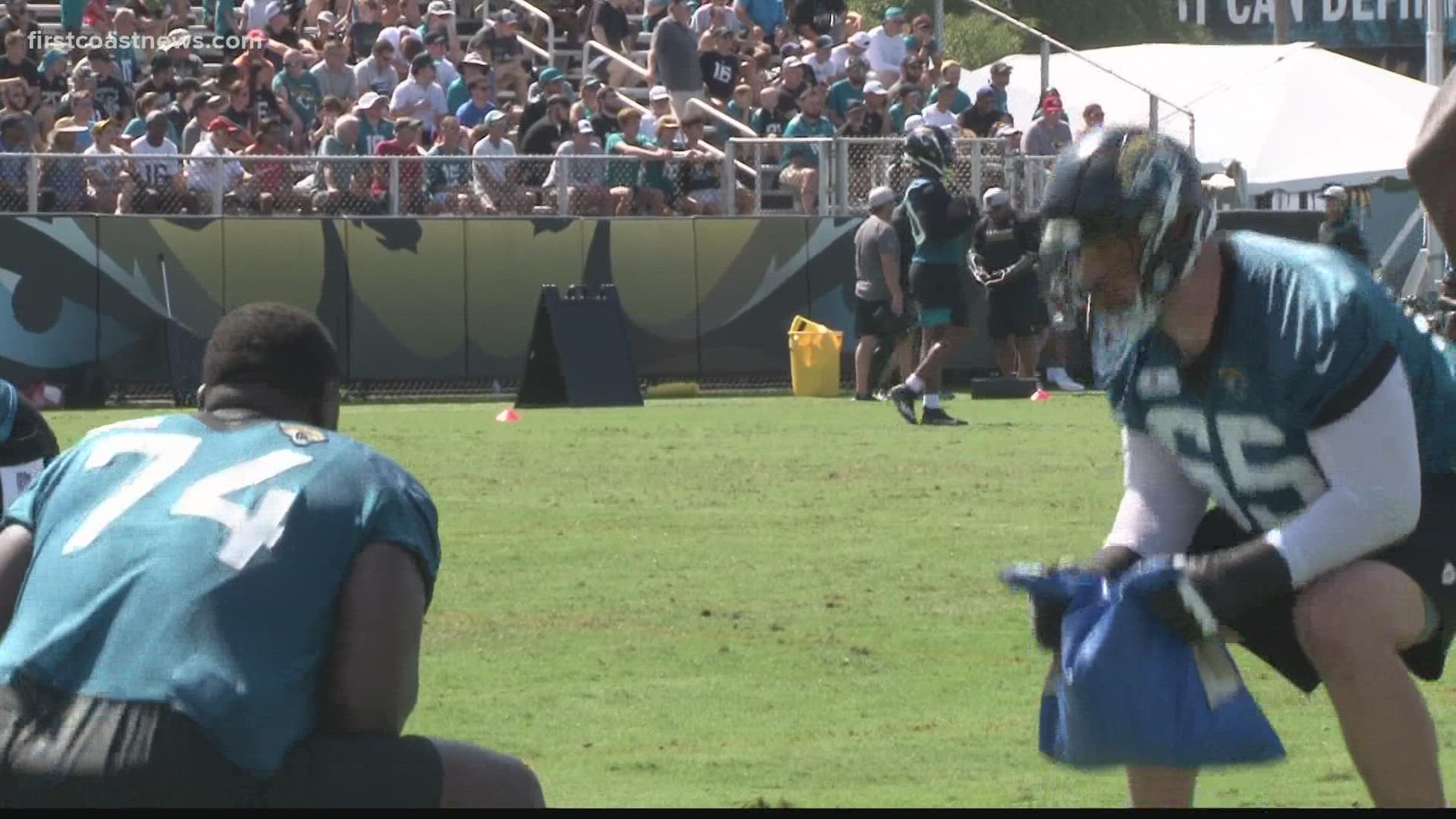 After jaw-dropping performances on Wednesday and Thursday, Jaguars rookie quarterback Trevor Lawrence was bound to inevitably take a step back on Day Three of Jaguars Training Camp -- even if it was just a slight step. Add in the fact that Gardner Minshew once again saw the bulk of the reps with the first team offense, and the fans at the Dream Finders Practice Complex Friday didn't get to see quite as many fireworks as their counterparts on Thursday.

But they did get to see plenty of red-zone work, which meant touchdowns. Which quarterback led the way in the box score?

Minshew rebounded nicely from a 9-of-13 day Thursday with a much stronger, Day Three performance. The third-year quarterback went 5 of 5 in the first team period. That included completing a pass to Marvin Jones Jr. on the numbers despite a low snap that hit the ground, and a pretty, seam-route to rookie tight end Luke Farrell. In the seven-on-seven red-zone period, Minshew was plagued by four drops (Devine Ozigbo, Laviska Shenault, D.J. Chark, and Travis Etienne), despite all four being largely on target. He tallied four touchdowns, finding Chark, Shenault, Phillip Dorsett, and Laquon Treadwell for scores. In the 11-on-11 red-zone period, Minshew had two touchdowns, although one was called back by an offensive pass interference call (to Treadwell; there are refs at Training Camp) and the other touchdown to Jones Jr. would've been broken up if Shaq Griffin was allowed to press. In accordance with NFL policy, Jaguars defenders are not allowed to press during the four-day, acclimation period that kicks off Training Camp. Minshew finished 14-of-19 through those three periods.

We had Lawrence charted as 9-of-13 on Friday, although that line also requires a further explanation. While he didn't fall victim to nearly as many drops as Minshew, Lawrence underthrew receivers more than once, completing several passes simply because defensive backs cannot press and the receivers were able to come back and make a play on the ball. He was 3-of-4 in the first team period, highlighted by an over-the-shoulder, eye-hole completion to tight end Tyler Davis up the sideline. There were two "free plays" that never got off the ground running during that period. In the 7-on-7 red-zone period, Lawrence had four touchdowns (Tim Tebow, Dare Ogunbowale, Josh Hammond, Jalen Camp) and was 4-of-6 for the period. He displayed pin-point placement on the touchdowns to Hammond (back of the end-zone) and Camp (far back-corner), while finding Tebow for an over-the-shoulder bucket grab. Lawrence struggled in the 11-on-11 red-zone period, finishing 2-of-3 with two touchdowns, a hand-off to Ogunbowale, and a QB option run of his own. The period did feature arguably Lawrence's best throw of the period: a touchdown with touch to Collin Johnson in stride in the corner of the end-zone.

Jake Luton, back in a full capacity for the first time since being reinstated off the Reserve/COVID-19 List, did not see reps during the team period.

If you've read these reports the previous two days, Josh Hammond's name didn't pop up nearly as frequently as it did Friday. The second-year receiver and former Florida Gator caught two touchdowns during red-zone drills and displayed ballerina-like feet, dancing along the touchline to make both scores possible. He also caught passes during the first team period from Minshew and Beathard.

Another name that, perhaps surprisingly, hasn't been called as often as many anticipated: second-year wide receiver Collin Johnson. Johnson had a pair of touchdowns as well during red-zone drills, and, like Hammond, showcased elite footwork. With Marvin Jones Jr, D.J. Chark, and Laviska Shenault all but guaranteed to be at the top of the Jaguars' depth chart -- and Phillip Dorsett and Jamal Agnew both signed in the off-season -- it will be interesting to see how many wide receivers the Jaguars keep on their 53-man roster.

Walker Little is a name that has been brought up quite frequently. Many Jaguars fans have half-jokingly already proclaimed the second-rounder out of Stanford as the next Tony Boselli. Coincidentally, Boselli, the Jaguars' first-ever Draft pick in 1995 and four-time Pro Football Hall of Fame finalist, was at practice this week. Boselli remarked to reporters how Little has the size and physical make-up to be an imposing left tackle in the NFL. He's not just carrying weight he's put on for football purposes -- he's just a big dude. And a big dude who can move, as evidenced by his battles with Cam Robinson Friday and throughout Training Camp. During the drill below, offensive line coach George Warhop, a vocal admirer of Little, couldn't help but smile during several of Little's reps.

The Jaguars made several moves following Friday's practice. Kicker Aldrick Rosas was released with a non-football injury designation. Fourth-year linebacker Leon Jacobs (ACL tear) was also released with a failed physical designation. In a corresponding move, the Jaguars signed second-year wide receiver Tevin Jones, who most recently played in the Canadian Football League in 2021. He has appeared in five NFL games, all with Pittsburgh in 2019.

Given the above note about the Jaguars' crowded wide receiver room, it is interesting that the decision was made to add an additional receiver.

Safety Jarrod Wilson was absent from Friday's practice. Tight end James O'Shaughnessy once again worked off to the side for a second straight day. Cornerbacks C.J. Henderson and Chris Claybrooks remain on the Reserve/COVID-19 List.

- DaVon Hamilton has not only recovered from his knee injury during his rookie season: he is a very large human. He got into the backfield on the final play of the final team period. Quarterback C.J. Beathard stands at 6'2'', 215 lbs and he looked miniscule next to the second-year defensive tackle out of Ohio State -- who is now listed at 6'4'' 335 lbs.

- The notable name missing above: 2020 first-rounder K'Lavon Chaisson. Chaisson was working with the other outside linebackers at that point. Allen had high-praise for his prodigy after practice.

"I was literally just talking to him walking off the field about his growth, just the little changes that he’s made -- just to be able to rush the passer and do the moves that he's doing," the third-year pro Allen said. "He’s getting smarter in the way he plays. He’s getting more physical. I’m excited to get to rush the pass with him because I know he’s going to take a lot of attention, and I know I’m going to get a lot of attention."

- Allen and center Brandon Linder spoke after practice. Linder made headlines in his comments regarding how much higher the energy is at Meyer's training camp compared to previous regimes.

"Camp is good. It’s been a lot of fun. This is probably the most energy that I’ve seen in a camp here. It’s refreshing. It feels new, and it’s exciting what we’ve got going on back here," the eighth-year pro said. "I’ve felt the energy lift, I’ve felt myself happier in the building, more excited to come out here and perform.”

- Running back Dare Ogunbowale had two touchdowns during team drills, showing agility and evading would-be tacklers. The fourth-year tailback is regarded as a third-down back and a Special Teams ace. The Jaguars already have James Robinson, Etienne and Carlos Hyde all but assured at the top of their depth-chart; it will also be curious to see how many running backs they carry on the 53-man roster.

The Jaguars are back on the practice field for "NFL Back Together Saturday," the third of six practices open to fans.