The quarterbacks shined, their offensive line struggled, and Urban Meyer says there are "no excuses." News and notes from Day One of Jags Training Camp. 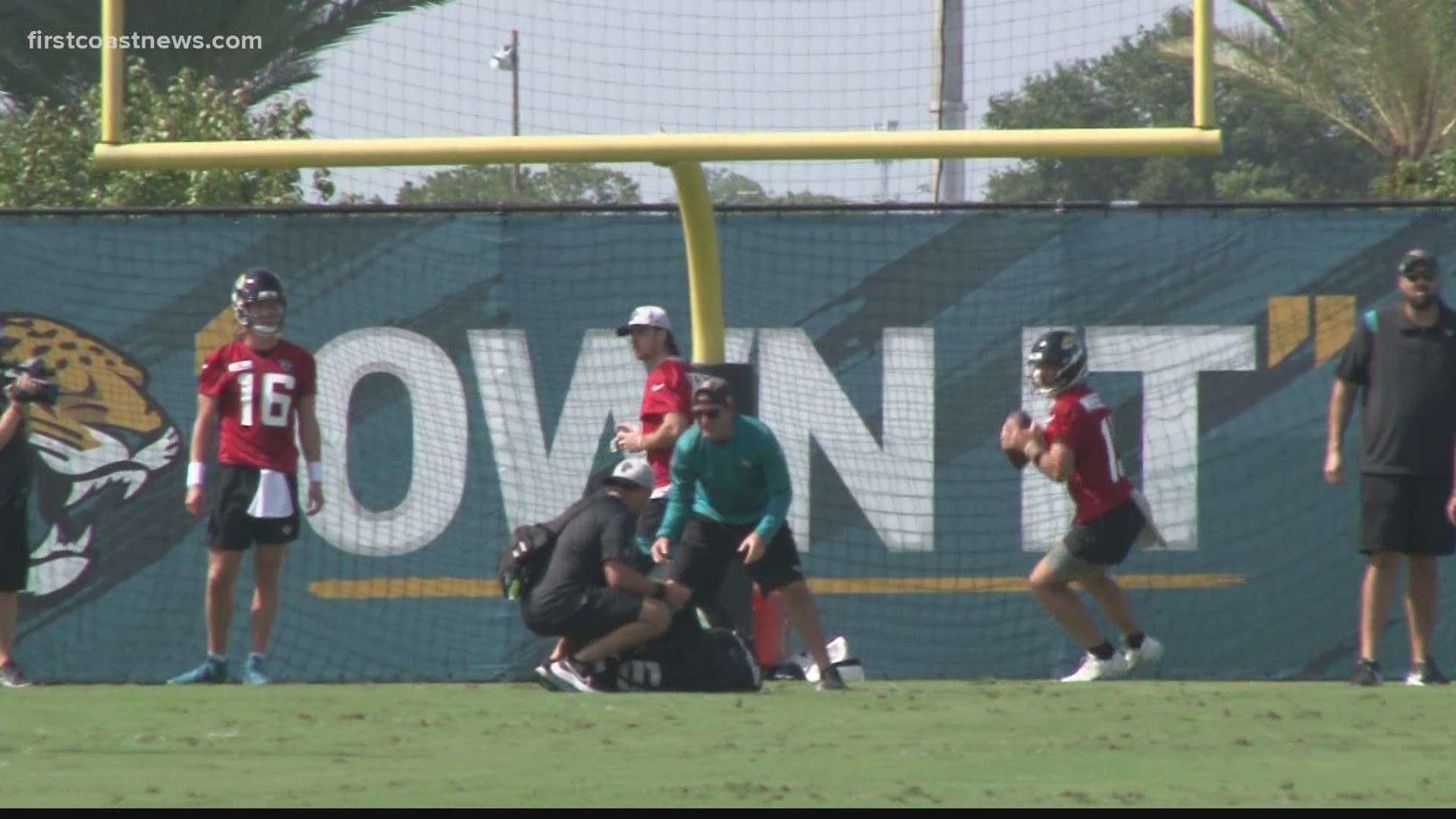 Trevor Lawrence and the Jacksonville Jaguars will play a game in 17 days.

It's real. It's happening.

(even if some folks are still aimlessly debating if Lawrence will be the Day One starter -- don't worry, we'll get to that in a second)

The Jacksonville Jaguars opened 2021 Training Camp Wednesday and will host their first practice open to the public on Thursday. It's the first Training Camp for Lawrence, head coach Urban Meyer, and a whole bunch of other members of the new-look Big Cats.

But enough exposition: let's get to the juicy details everyone's waiting for.

Lawrence vs. Minshew: who is Number Two?

Incumbent starter Gardner Minshew got plenty of clicks and turned plenty of heads when he now infamously stated on former NFL star Chris Long's podcast that "Number Two was no longer an option for him."

Wouldn't you know: Minshew ran largely with the "One's" on Day One of Training Camp. Meyer told reporters after practice to not read too much into it.

"[Lawrence and Minshew] rotated today, and C.J. [Beathard] had a decent day today. It's a long process. Today was Gardner and Trevor at 1. Tomorrow I think will be a little different."

All three quarterbacks were largely consistent and steady on Day One, with both Minshew and Lawrence uncorking 20-plus yard throws. Minshew had a beautiful, go-route throw down the sideline to James O'Shaughnessy; the sixth year tight end did a tremendous job to hold onto the ball through coverage. But Minshew also had his share of miscues, underthrowing D.J. Chark (who was in double coverage) in the first team period of the day and having his pass batted down by veteran Lerentee McCray in the final team period. On intermediate routes, particularly to the sideline, Minshew consistently completed his passes. His signature dink-and-dunk, lofted passes over the line-of-scrimmage were also all on target.

Lawrence's day was highlighted by a strong, final team period in which he hit a wide-open Phillip Dorsett for a 30-plus yard gain and later found rookie Josh Imatorbhehe in coverage for a 20-plus yard play downfield. Like Minshew, Lawrence was on-the-money when it came to intermediate passes. His passes were so on-point that Pharoh Cooper couldn't haul in Lawrence's seemingly, too-hot-to-handle first pass of the day.

From this reporter's perspective: there continues to be a clear, decipherable difference between a Lawrence thrown ball and a Minshew thrown ball. One is a bullet. The other is strategically placed. The quarterbacks' footwork further illustrates their different styles. For every one stride Lawrence takes in the pocket, Minshew is taking two to three. It's not that Minshew is doing it wrong: given his physical limitations, it is just how he must overcompensate. Minshew largely is making it work... but Lawrence has the luxury of executing largely effortlessly.

ESPN's Mike DiRocco was on charting duty today; here is his official tally:

After all, as Meyer noted after practice, don't forget the fifth-year Beathard, who, after struggling mightily at times in OTAs, delivered his most consistent performance of his Jaguars tenure. Most of his passes were intermediary, but he did not sail passes over receivers' heads, as became a theme during off-season workouts.

The quarterbacks were, of course, the main attraction. But in following along with the QBs..

Offensive Line depth could come back to haunt Jacksonville

While the Jaguars may have a competition on their hands at offensive tackle, as second-round draftee Walker Little continues to impress, the second and third offensive lines did not impress. In fact, they were a detriment to the offense: if today had been a game, Lawrence and Beathard would've been on their back more than a handful of times.

The decision to bring back the entire starting five from the past two seasons was wise on Meyer and his staff's part. Those five -- Cam Robinson, Andrew Norwell, Brandon Linder, AJ Cann, and Jawaan Taylor -- are not who I am referring to. Minshew was able to fire off so many of those completions because the starting offensive line held tough. It was when other linemen began rotating in that things went awry.

On Lawrence's first pass of team drills (in which Pharoh Cooper could not hold onto Lawrence's pass), the pocket collapsed almost immediately, particularly on the right-hand side (Will Richardson and Ben Bartch). On the very next play, the snap bounced off Lawrence's hands. This reporter saw it as a mistimed, low snap; other reporters said it was just mishandled by Lawrence. Either way, the ball was snapped by Tyler Shatley, who Lawrence has largely been working with during warm-up's. Not great.

Beathard's pocket also collapsed on the first rep he took in team drills, and only because these practices are non-contact was he able to haul up a 30-yard prayer to Josh Hammond for a completion. The offensive line collapsed again on Beathard during the final team drill period.

On almost all of these plays, coaches were yelling "don't touch the quarterback!" at the defensive linemen. Those linemen know they're not supposed to contact the quarterback during practice. But trust me when I say: they could've gotten through the O-Line, pulled up, and gently tapped both Lawrence and Beathard on the shoulder if they wanted to.

The Jaguars have 14 offensive linemen on their 90-man roster. The starting five looked solid -- neither Taylor or Robinson jumped off-sides all morning, a rarity for the duo. Little continues to make strides. Lawrence's highlight throw to Imatorbhehe was only possible because of Little's strong blocking on Lawrence's blind side.

But if heaven forbid any of those six go down with an injury, the Jaguars may have a problem on their hands.

After ranking towards the bottom of the league in COVID-19 vaccination rates during off-season work-out's, Urban Meyer told reporters that the Jaguars are now over the 80-percent threshold. Once a team reaches 85-percent, additional, COVID-19 restrictions can be loosened, although players who choose to not be vaccinated will still face stringent protocols.

D.J. Chark and Shaq Griffin both spoke after practice and both are fully vaccinated. They also both stressed that the vaccine is a "preference," but noted the discipline unvaccinated players will have to have during the season.

"I actually wanted to know [what the violation was]. I thought we did a heckuva job. We gave them every third day off. We had full attendance, and I was very proud of our guys," the first-year coach said. "[The NFL] sent us [video of] eight plays [from that practice]. The eight plays were of defenders going after a ball. I want to say three times it was incidental contact. The other five were, yeah.

So, the adjustments we made: on press coverage right now. It's all off the ball. That's where most of the stuff was."

Griffin was asked how refraining from press coverage is affecting practice.

“Very tough. I remember I was asking a coach a question and I said, ‘I know we have to lay off but if someone jumps over my head, catches the ball, and does all the extra-ness, I’m going to lose it.' He said, ‘No, just move out of the way.’ I said, ‘Yes sir, I’ll move out of the way.’ We don’t want to have any issues. We don’t want to have any trip ups, any injuries, no fines at all. It’s four days. I can take a deep breath and be like, ‘I’m down one day, I have three left.'"

- Remember when Urban Meyer said he loves to "hear the sound of the ball leave the quarterback's hand" and we all laughed? Yeah, he's still standing at the line of scrimmage (!!) during drills. Thankfully, just the drills where the defenders are plush dummy's.

- While much has been made about how muscular quarterback-turned-tight end Tim Tebow looks, fellow tight end Chris Manhertz (6'6'', 260 lb) remains one of the largest physical specimens this reporter has ever seen. And after playing basketball in college, it still looks like he hasn't fully grown into his football frame. Second-place goes to rookie defensive end Jordan Smith (6'7'', 250 lbs), who looked downright vicious in the best way possible during special teams drills.

- Speaking of Tebow: he did finally drop a pass today, but it was a slightly overthrown ball that he batted up in the air and almost came down with (and slightly decked Shaq Griffin in the process)

- After that infamous hamstring pull during OTAs, Lawrence did not have any sort of leg sleeve or brace on.

- First-year veteran Phillip Dorsett has proven to be quite the security blanket in the slot for Jaguars' quarterbacks through off-season workouts and now one day of Training Camp. All three quarterbacks hit him at different times Wednesday.

- Veteran running back Carlos Hyde played for Meyer in college at Ohio State, and Meyer has continued to stress how important Hyde will be to the Jaguars running game -- a running back room that already features the likes of 1,000 yard rusher James Robinson and first-rounder Travis Etienne. Hyde had a breakaway run in the final team period and got a ton of applause from his teammates.

- Etienne fumbled in the final team period and the defense was able to capitalize on it. While this reporter wasn't here for the 2017 season: the hooting, hollering, and energy this defense brings has the vibe of "Sacksonville." We'll see if the sacks come when the pads come out and the lights go on.

- Enjoy the below, fun segment with Shaq Griffin, who is quickly becoming a fan favorite

The #Dolphins signed @Shaquemgriffin literally five minutes ago.@ShaquillG's trash talking has already begun + he asked for us to blow this video up, so please do 😂 pic.twitter.com/YC0daZxHcU

The Jaguars are back on the practice field on Thursday, July 29, where they'll play in front of fans for the first time this year. Practice begins at 9:45 a.m.