The Jaguars hosted their annual "Family Night" practice on Friday at TIAA Bank Field. The event drew 15,245 fans to downtown Jacksonville for the team's most notable practice of training camp. 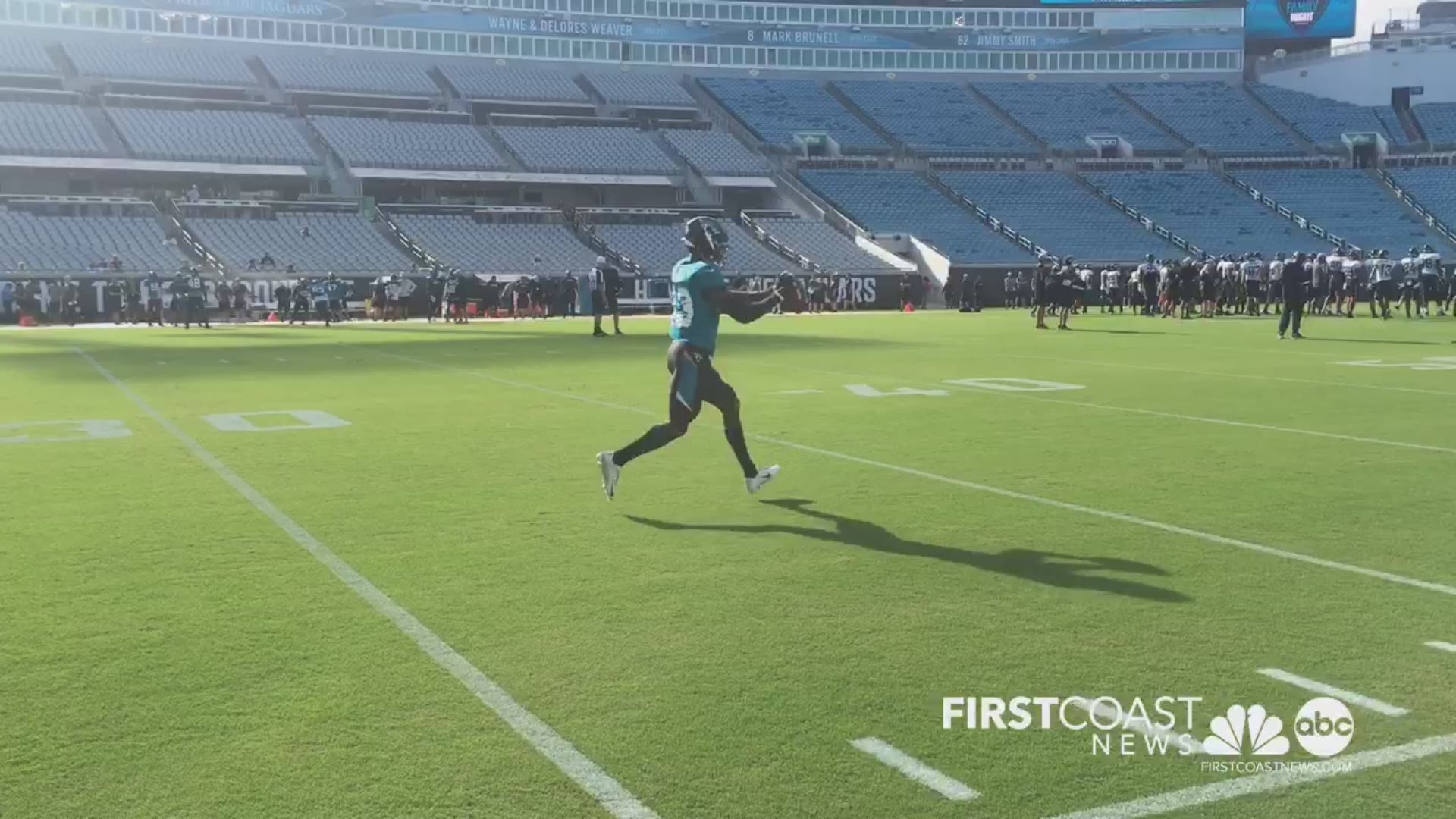 The Jaguars hosted their annual "Family Night" practice on Friday at TIAA Bank Field. The event drew 15,245 fans to downtown Jacksonville for the team's most notable practice of training camp.

- The practice wasn't entirely clean for the Jaguars quarterbacks but Blake Bortles and Cody Kessler both had their moments.

Bortles completed 14-of-23 passes with an interception during 11-on-11 team drills. The pick came off a deep ball that hovered its way toward wide receiver Marqise Lee but was intercepted by safety Barry Church. Bortles' highlight of practice was the final play of the night, as he threw a perfectly placed strike to wide receiver Dede Westbrook in the end zone about 20 yards downfield. Cornerback A.J. Bouye had solid coverage on Westbrook but the wide receiver leaped forward to bring in the catch and the touchdown. The play sent the fans home happy.

Kessler showed off his accuracy with a 22-of-31 completion ratio. Not all of the passes were pretty but Kessler managed to move the offense regularly during team drills. Kessler's chemistry with rookie wide receiver DJ Chark is off the charts. During one drive, Kessler hit Chark for four big gains. The rookie has become Kessler's go-to guy since the wide receiver arrived in May.

Sixth-round quarterback Tanner Lee had another up-and-down night. Despite going 13-of-19, Lee threw an interception to cornerback Sammy Seamster for the second consecutive practice. He also had some poorly placed passes that were well in front of his targets. Lee's lone dependable option was undrafted wide receiver Allen Lazard who continued to surge his stock with a pair of impressive receptions.

- The defensive standout from the Friday practice was cornerback D.J. Hayden who produced two pass breakups and a "sack" with the first-team defense. This was easily Hayden's strongest practice of training camp as he had a strong night in coverage overall.

- Kicker Josh Lambo was perfect on field goals and extra points. He has continued his consistency from last season so far.

- Speaking of special teams, rookie punter Logan Cooke had his coming out party at TIAA Bank Field. Cooke had three well-placed, well-timed punts downed within the five-yard line. After every punt, Cooke's teammates came up to him with high-fives. It was an encouraging sign for a rookie who has been working to earn a job uncontested.

After missing four practices with a knee injury, #Jaguars WR Donte Moncrief is back. pic.twitter.com/tEpFLcMHmq

- Defensive end Dante Fowler (PUP, knee) also missed practice. Fowler has missed the entirety of training camp so far but he can be taken off the physically unable to perform list at any time.

- The Jaguars signed veteran defensive tackle Sealver Siliga to a contract prior to practice. He will fill the role left by Kaleb Eulls, who was waived/injured. Eulls will revert to the injured reserve if he passes through waivers unclaimed.

- Wide receiver Marqise Lee made a highlight catch against Ramsey's coverage. The cornerback was in perfect position but Lee made a leaping catch off a well-thrown ball from Bortles. The shoulder injury that cost him a couple of practices this week doesn't seem to be bothering him anymore.

- Big Hit of the Night: While this was supposed to be more of a "thud" practice, linebacker Telvin Smith popped running back T.J. Yeldon as he caught a screen pass from Bortles during 11-on-11 drills. The crowd reacted accordingly to the hit.

- Running back Corey Grant showed off his impressive balance and speed throughout the practice. He ran for a pair of touchdowns, as he shook defenders out of their cleats. Grant has performed well after receiving a nice raise this offseason.

- This practice concluded the toughest part of the training camp schedule with six-straight sessions in full pads. The Jaguars will be off Saturday and return to work on Sunday for more practice.