The Jaguars went 10 padded training camp practices without a physical altercation. However, tempers finally reached a boiling point on Sunday during and after the 11th padded session. 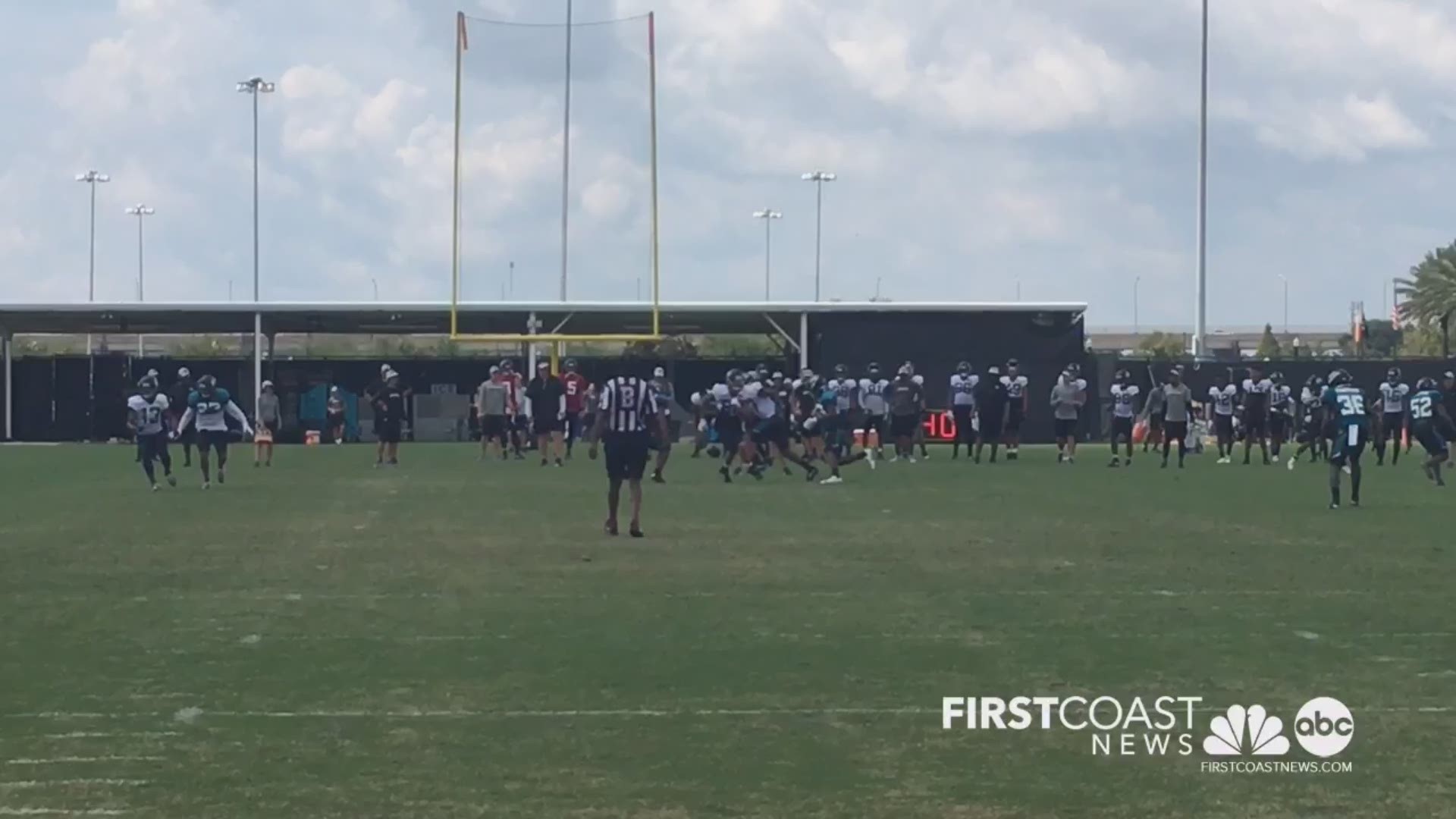 The Jaguars went 10 padded training camp practices without a physical altercation. However, tempers finally reached a boiling point on Sunday during and after the 11th padded session.

During 11-on-11 drills, tight end James O'Shaughnessy was targeted in the flat by quarterback Blake Bortles multiple times. O'Shaughnessy's final catch of the drill led him out of bounds, leading to a skirmish between him and defensive end Dante Fowler. Pro Bowl cornerback Jalen Ramsey also got involved with the physical altercation on the sideline.

Following practice, Fowler and fellow defensive end Yannick Ngakoue got into a heated argument and needed to be separated by fellow defensive linemen Abry Jones and Calais Campbell. The conflict continued as both players left the field. It is unclear what caused the argument between the two players.

Fowler returned to practice on Saturday after being taken off the physically unable to perform list. He was a full participant in both practices upon his return. Fowler has been Ngakoue's backup since the latter arrived in Jacksonville as a third-round pick in 2016.

The Jaguars passed on Fowler's fifth-year team option in May. The former first-round pick is set to make $3.64 million in base salary this season. He will be suspended for the team's Week 1 clash against the New York Giants.

- Along with the two skirmishes, the entire practice had a sluggish feel. There were multiple early whistles, some poorly played drills and quite a few drops.

Bortles lowlight came immediately after the skirmish between Fowler and O'Shaughnessy. The quarterback targeted Westbrook deep downfield and cornerback A.J. Bouye picked off the pass.

- As mentioned before, there were quite a few drops during practice. Wide receiver Marqise Lee, DeAndre Smelter and Dorren Miller were among those who dropped catchable passes during team drills. O'Shaughnessy and fellow tight end David Grinnage also dropped passes.

- Middle linebacker Myles Jack produced three pass breakups during practice. Two of the breakups came on back-to-back drills during 7-on-7 period. One play later, Ramsey also broke up a pass. Linebacker Telvin Smith broke up a pair of passes during 11-on-11 drills while cornerback Tyler Patmon also knocked a ball loose.

- The Undrafted Report: Safety C.J. Reavis recorded his second interception in as many days during 7-on-7 drills. Third-string quarterback Tanner Lee targeted running back Tim Cook with a laser pass but the ball bounced off Cook's pads and landed into the hands of Reavis. Lee also made a nice jump ball throw to wide receiver Allen Lazard who caught the pass over cornerback Jalen Myrick.

- The Jaguars will have the day off Monday. The team will return to practice on Tuesday but Jaguars head coach Doug Marrone said the session will not include full pads. The Jaguars will then travel to Minnesota for joint practices with the Vikings.