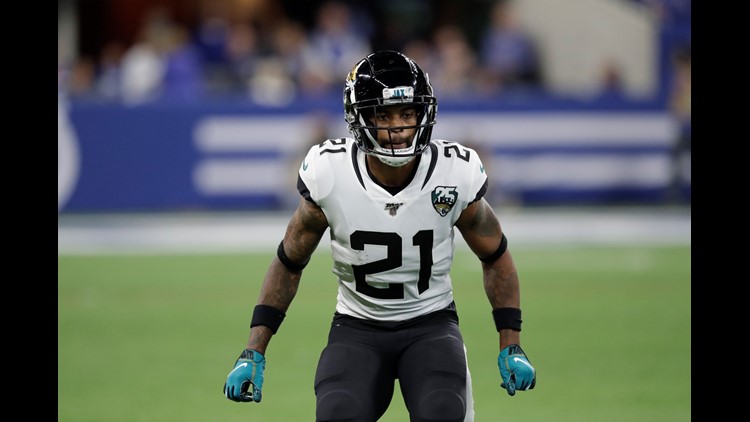 Photo by: AP
Jacksonville Jaguars cornerback A.J. Bouye (21) in action during the first half of an NFL football game against the Indianapolis Colts, Sunday, Nov. 17, 2019, in Indianapolis. (AP Photo/Michael Conroy)

ESPN's Adam Schefter is reporting that Jaguars have agreed to trade Pro Bowl cornerback A.J. Bouye to the Denver Broncos for a fourth-round draft selection. Mike Klis of 9News, sister station of First Coast News, has confirmed the initial report. The deal cannot be processed until the league year begins on March 18.

Bouye, a Pro Bowl selection in 2017, appeared and started in 14 games for the Jaguars in 2019, his third year with the club. He was rumored to be a cut-casualty this spring, given his $13.5 million salary each of the next two seasons.

Originally an undrafted free agent out of UCF, Bouye registered 65 tackles, eight passes-defended and an interception in 2019, allowing three touchdowns. His best season came in 2017 when he recorded 6 interceptions and 18 passes defended.

The Jaguars traded the cornerback that started opposite Bouye for most of his time in Jacksonville, Jalen Ramsey, in October. This leaves fellow former undrafted free agent Tre Herndon as the lone, true cornerback with starting experience on the Jaguars' roster.